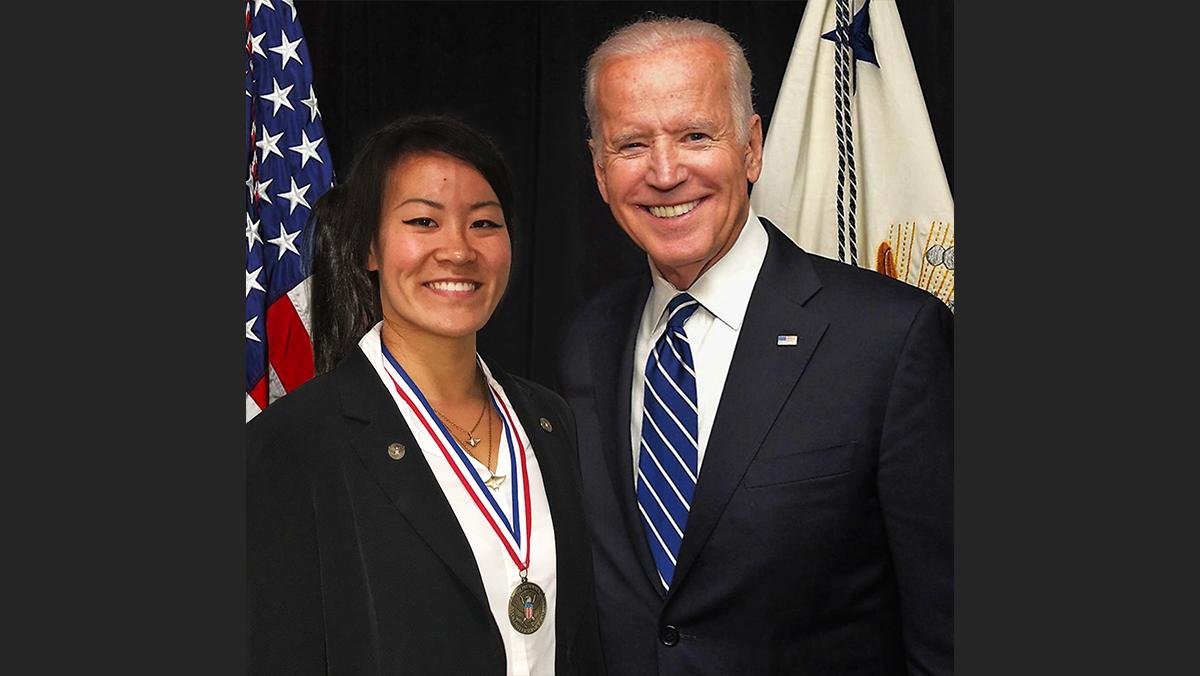 Courtesy of Campus Compact Mid-Atlantic
From left to right, Maggie Eckerson '18 met President Joe Biden in August 2022 when she received a medal for the President's Lifetime Achievement Award at the White House for her work in the AmeriCorps.
By Emma Kersting — Staff Writer
Published: September 21, 2022

Eckerson said she applied to join the Peace Corps shortly after graduating from the college with a major in environmental science and minor in film and photography. She was assigned to serve in Belize, but was her service was interrupted. Eckerson was not able to return to the Peace Corps because, like many employers in the early stages of the pandemic, the federal government was letting employees go rather than hiring new ones.

Eckerson said that when she was searching for jobs post-quarantine in summer 2020, a friend recommended that she join the AmeriCorps, an independent agency of the United States government that sends volunteers across the country to serve communities in need.

“I heard that they do a lot of work in environmental remediation as well as emergency management, so once I heard about those I was instantly sold,” Eckerson said.

Eckerson worked with the AmeriCorps for two 10-month sessions, building houses and doing other physical labor jobs to serve different communities across the country. Part of the AmeriCorps is an Independent Service Project, which team members organize to dedicate at least 80 hours to throughout their 10 months of service. Eckerson worked in the National Civilian Community Corps program for her first session with AmeriCorps and the Volunteers in Service to America (VISTA) program for her second.

“It was definitely a physical experience because it’s exhausting work, but it’s very fun and it passes the time really quickly, and we had some great coworkers,” Eckerson said.

Eckerson contributed over 100 hours each to the two Independent Service Projects that she organized for her team, which involved trail restoration, working with Habitat for Humanity and building houses, which landed her the two United States Presidential Volunteer Service awards.

“At first, I was devastated when I wasn’t able to go back to the Peace Corps, but AmeriCorps has just been a wonderful opportunity,” Eckerson said.

For the President’s Lifetime Achievement Award, one must contribute more than 4,000 hours of service in their lifetime. Eckerson was able to achieve this goal through her work in the AmeriCorps in her Independent Service Projects and the year she spent working with The Catholic University of America during her second year with the AmeriCorps.

During her time with the Catholic University of America, Eckerson led a program mentoring middle school students to prepare them for college.

Eckerson was recognized for her achievements in service in August 2022, meeting the President of the United States, Joe Biden, as she received a medal for the Lifetime Achievement Award at the White House.

Eckerson said she is where she is today because of her time at the college. She said she applied to serve for the Peace Corps in Belize because of her experience with Susan Allen, professor in the Department of Environmental Studies and Sciences.

Allen, for the past 10 to 15 years, has run a program where students take her course, Rainforests, Reefs and Ruins, during the Fall semester of an academic year and then take a two-week trip to Belize during the winter semester to study the different subjects they learned during the course.

During the two-week study abroad, students visit 10 national parks and forests, do homestays with families, visit ruins and snorkel in the reefs. Through the program, students have first-hand experiences understanding different ecosystems and the social-political dimensions of environmental issues.

“I think that a lot of students that go have never been outside of the United States, so for them to experience another country, another way of living, another way of looking at the environment, is often transformational,” Allen said.

Eckerson’s achievements go beyond national recognition as she was an exceptional student at the college. Professors from the college said she stood out from other students as a natural leader and extrovert.

Mike Smith, professor in the Departments of History and Environmental Studies, has known Eckerson since her first year at the college as she had taken several of Smith’s classes through the honors program and for her Environmental Studies major. Smith said Eckerson was always eager to participate in class discussions, even in 8 a.m. lectures.

“What Maggie embodies, and this is such a cliche but it’s true, is that she was not afraid to go outside her comfort zone,” Smith said. “She just was interested in testing boundaries and limits and taking the path of least resistance was just not something she was going to do. … It’s exactly what I hope students come to embrace.”

Eckerson’s environmental studies professors knew she was destined for success based on her tenacity as a student.

“She is amazingly energetic and interested in everything,” Allen said. “She’s very independent and self-confident, so she just really has always wanted to tackle the world and experience everything to the maximum of her potential.”

Editors note: A previous version of this article stated that Eckerson served for 11 months in Belize before being sent home because of the COVID-19 pandemic. She was assigned to serve in Belize, but her service was interrupted.