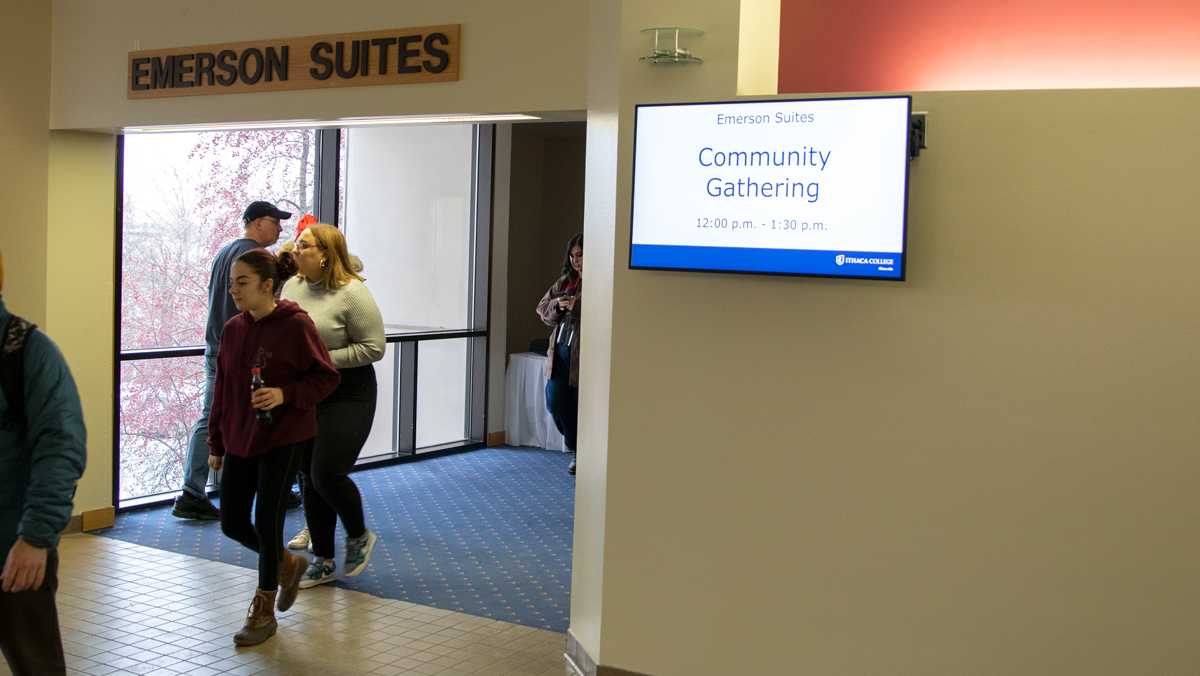 Approximately 200 students, faculty and staff members of the Ithaca College community came together at an open forum to discuss a racist video that surfaced on social media early last week. This forum aimed to provide a space for community members to voice their concerns and to discuss how to move forward.

The video was recorded by sophomore Khush Khemlani, who is from Puerto Rico. The video went viral after being posted sometime between Dec 7. and Dec. 8. The student explained how she had gotten a spray tan and used the n-word to describe the complexion of her skin. Khemani later apologized.

Rosanna Ferro, vice president for the Division of Student Affairs and Campus Life, respond to the video in a statement published on Intercom Dec. 8. She and other administrators also created an opportunity for dialogue at the forum.

The forum had to be moved from its original location in Klingenstein Lounge to Emerson Suites to accommodate the large turnout. The discussion was led by Ferro; Bonnie Prunty, dean of Students; Sean Eversley Bradwell, director of the Center of Inclusion, Diversity, Equity, and Social Change; and La Jerne Cornish, provost and senior vice president for Academic Affairs.

Cornish said the purpose of the forum was not about attacking each other but rather to have a dialogue to understand the situation and the feelings provoked by the video. She led an exercise where students said out loud one word to describe how they were feeling as a result of the video. These emotions included: disgusted, disrespected, betrayed and amused.

After this exercise, Bradwell and Prunty facilitated an exercise where attendees offered solutions moving forward.

The administration asked that conversations held during the forum be paraphrased so that personal identities were not revealed due to the sensitivity of the discussion. The following sources gave permission to use their thoughts in this article.

Freshman Nile Gossa-Tsegaye asked during that event that all faculty respond to understand how they feel about the video that surfaced. Bradwell responded that he is upset because as a black man, he understands the struggle of being comfortable in black skin.

Prunty said that she was not shocked but disappointed by Khemlani’s words. Prunty emphasized that she wants to understand how to help students moving forward.

Cornish said that as a black woman she does not use the n-word. She said that it is a time to have a discussion around the use of the word and hold people accountable for their use of words.

“Gone are the days where we call folks out,” Cornish said. “We are now in the days where we call folks in, and we hold them accountable for what they say. … As you can tell from the white hairs on my head, I am a woman of a certain age, and I don’t use the word. I abhor the word; I struggle every time I hear the word, with an ‘a’ with an ‘er’ or any other kind of variation you want to have on that word.”

Cornish said Khemlani was not expelled because the college policy does not regulate speech, but said this was a “teachable moment” and added that the college will make sure to add a statement of values in the five-year strategic plan.

Ferro said she wants the college community to know that she and senior leadership at the college are taking this seriously and value community feedback moving forward.

“We knew we weren’t going to resolve the issue, but we needed to act quickly and give students the space to be heard,” she said. “We needed to act quickly and for them to see that we as administration of the college and senior leadership are taking this very seriously, and that this is something we are going to continue to work on and figure out ways to systematically address these issues.”

Many students expressed mixed reactions to the forum and to the video.

Freshman Leah Aulisio-Sharpe said she thinks the situation is larger than one student and that it is going to take a lot for real change.

“Good steps are being taken,” Aulisio-Sharpe said. “But it’s going to take more than a forum.”

Similarly, freshman Shanteesh Stewart said it was important for faculty to hear from students because they have power to make change. She also said that she agrees with the sentiment expressed by other students at the forum that the burden is put on people of color to take action, but also needs support of white people to take action.

Other students were encouraged by the support from certain faculty.

Freshman Brianna Mottey said she appreciated the concern and frustration expressed by faculty of color.

“Seeing how shocked and pleased Dr. Cornish was to see everyone there and how that warmed her heart, it gave me a sense of pride in who we are as a community,” Mottey said.

Freshman Kamira Armstrong said she appreciated that a lot of community members attended the event because it is important to respond as a community moving forward.

“I thought it was necessary to give students that space to reflect on it,” she said. “People are wondering what the solution is going to be.”

She also said that while she appreciated the event, there needs to be more action moving forward besides this discussion.

“You can talk and talk about something, but if you’re not gonna put any action behind it, what’s the point of it?” she added.

Sophomore Tatiana Rivera said she thinks the dialogue was really important but disagreed with some of the recommendations people gave for the college: to add more mandatory classes and workshops for students on issues issues of inclusivity.

“You can’t make something mandatory, because people have to be willing to learn and see that change,” she said. “There’s more to it than what the institution can do. It’s more about what individuals can do.”

Freshman Jordin Price said she was glad she went and is hopeful for the future.

“I think the event was an emotional turnout, but it made me really excited and happy to see what comes out after,” she said. “I got to see allyship be actually applied. I’m seeing little by little there’s action being done, and as a POC on campus, as a freshman, it’s amazing to me.”

This has not been the first time that the college has had to deal with racist incidents. In the past, students protested for the resignation of the previous President Tom Rochon after a series of racially charged events happened on campus. This movement was led by the group POC at IC.

The college will host another forum for student to express their thoughts about this situation in the Peggy Ryan Williams Center at 7:30, Dec. 12.