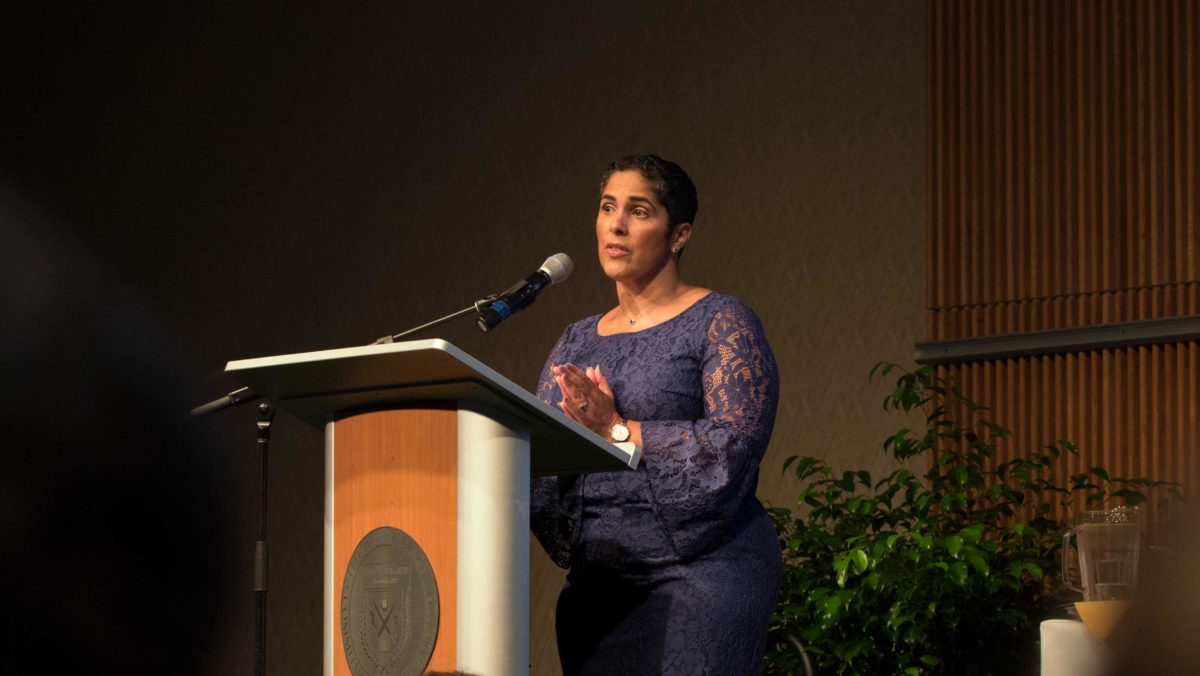 Ithaca College President Shirley M. Collado used her first All-College Gathering, held on Aug. 24, to set the tone for her presidency and the 2017–18 school year by focusing on the importance of community engagement and transparency from the college’s administration.

She said her two largest focuses this year are to get to know the college deeply as an institution and to encourage campus communities to come together across departments, schools and roles.

“Neither of these two things are about me or my vision, but about exploring and affirming our collective vision at IC,” she said.

“We all have the responsibility to contribute what we can, so building a vision together and being responsible for realizing that vision together … and recognizing our interdependence in success and in failure,” Collado said. “I know that I will not get everything right this year or in my presidency. I know that I will make mistakes, and I will own those, and I expect us as a community to do the same.”

Collado also took time to talk about the results of the campus climate survey that was released Spring 2017. Collado said the key issues that emerged from the data included building transparency and inclusiveness in decision making, improving career development and advancement opportunities for staff, developing richer mentoring models for faculty and fostering a deeper sense of belonging for students.

She said she is focusing on enhancing student affairs and campus life — which received a strong stream of applause from the audience — and strengthening her presidential team.

The structure of the meeting was also changed this year, with Collado foregoing the standard question–and–answer portion of the meeting, and instead, 20 minutes were put aside for audience members to talk to one another.

Carole Dennis, professor in the Department of Occupational Therapy, said she wants the college to address a lack of cross–collaboration and communication expressed by many that has hurt the college in the past.

“I think one of the things we hope for is a much more inclusive, transparent, collaborative college,” Dennis said.

Jeff Scott, director of dining services, said Collado’s speech was unifying and inclusive. He said having a portion of the gathering set aside for conversation between attendees was a fantastic decision that allowed members of the community to start to understand each other.

“We’ve had a lot of struggles in the past,” Dorsey said. “Perhaps sometimes feeling like voices haven’t been heard or there haven’t been structures in place to be interdisciplinary, so we’re very hopeful that people can take those individual passions and commitments they have, under the structures of new leadership, to really diversify our campus.”

Carlie McClinsey, Student Governance Council president, said the presence of Collado is a much–needed energizer for the college community. McClinsey said Collado’s commitment to listening is what makes her a strong leader and that it is important for Collado to listen to the campus community’s concerns before taking action.

“It’s so obvious [Collado] is student–focused, that she’s aware that the service this college offers is to the students,” McClinsey said. “So I think she will pay a lot of attention to what we have to say, and I think student input will be very important.”