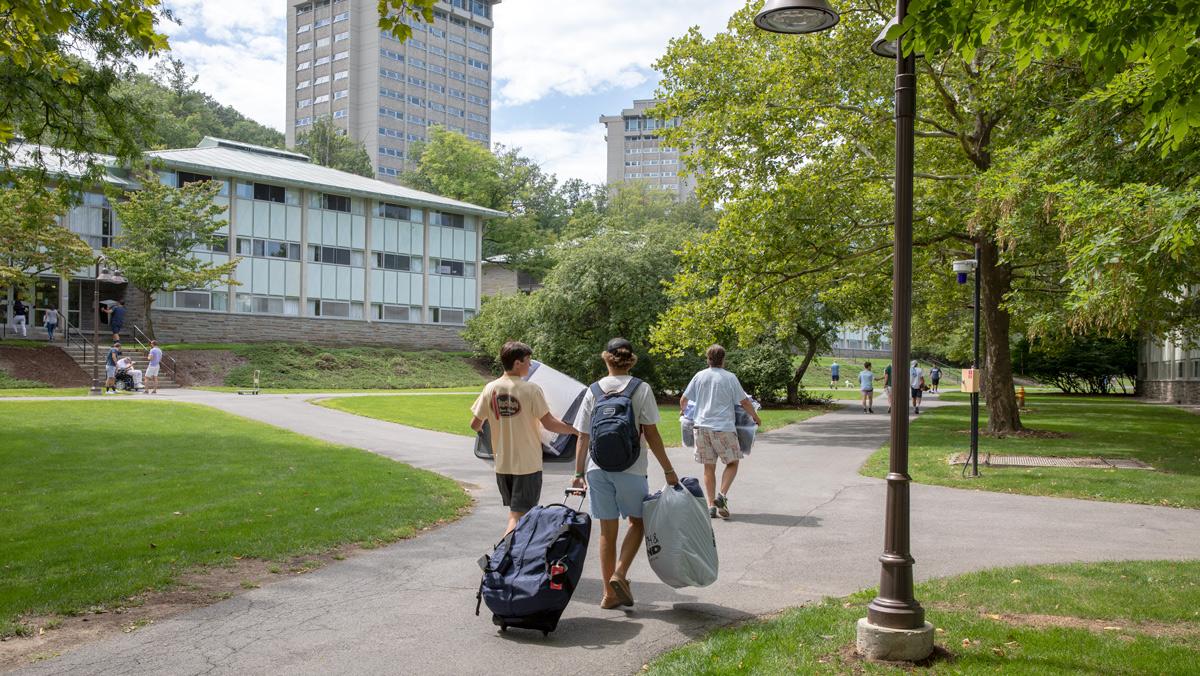 Elias Olsen/The Ithacan
Campus was teeming with large groups of Ithaca College freshmen and their families during move-in day Aug. 25.
By The Ithacan
Published: August 29, 2018

The Ithaca College Natural Lands received two private foundation grants for $15,000 each to support construction of a paved access path to the Boothroyd Woods Trail. Jake Brenner, associate professor in the Department of Environmental Studies and Science and ICNL faculty manager, has worked with students during the past three years to improve the ICNL trail system and increase accessibility.

This initiative included the construction of a turnpike, a raised gravel bed, in the forest near Boothroyd Hall.  These grants, awarded by Dominion Energy and the J. M. McDonald Foundation, will fund an asphalt path leading to this turnpike and will provide new and improved accessibility to the Natural Lands for people of all abilities.

Submitted on behalf of the athletic training program’s EquAT and InclusivAT programming, and with the help of several current athletic training students, the grant will fund a unique program involving Ithaca High School students during the 2018–19 academic year.

The NATA EDAC serves in an advisory capacity to the board of directors, aiming to identify and address issues relevant to the ethnically diverse populations to better serve the needs of both patients and fellow athletic trainers. EDAC advocates sensitivity toward cultural diversity.

The grant awarded to the college’s athletic training education program and its EquAT and InclusivAT program was awarded under Category 1 of the grant, as it’s intended to recruit, retain and educate ethnically diverse athletic training students.

Patricia Zimmermann, professor in the Department of Media Arts, Sciences and Studies and co-director of the Finger Lakes Environmental Film Festival, is now offering a new course for the Fall 2018 semester. The new course, The Environment and The Media, is a discussion-led seminar that will immerse its students in film, video and new media about the environment through a variety of screenings and readings.

The course also investigates how artists and media makers not only engage and interrogate environmental struggles, but also how these works reconfigure how we think about and enter into the environment as participants.

The course serves as a gateway course for students who may want to serve as blogging interns for the 2019 Finger Lakes Environmental Film Festival with the theme of disruptions. The course is open to all students in any major on campus. Overrides are available for students not currently enrolled in the honors program in order to expand access to the course and to FLEFF.

IC professor presents research on trip to university in Argentina

Jonathan Ablard, associate professor in the Department of History, presented his 2008 book “Madness in Buenos Aires” to the Argentine Psychiatric Association. He also presented “The Draft in Argentina in Transnational and Comparative Perspective” to faculty, students and local school teachers at the Universidad Nacional de General Sarmiento.

During that same visit, the UNGS radio station interviewed Ablard about his research and U.S. politics. Ablard was also a guest on the veterans affairs radio show “La voz de las Colimbas” (The Voice of Veterans) with host Ricardo Righi. “La voz de las Colimbas” works to support men who were forced to perform military service during Argentina’s last dictatorship and represents a network of groups throughout the country.

During his three weeks in Argentina, Ablard also conducted research at eight different military and civilian archives and libraries. The trip was sponsored by a Center for Faculty Excellence Summer Research grant.

The college library and Teaching and Learning with Technology in IT have collaborated to install a new Flash Studio, which is located in the library’s Digital Media Center.

Flash Studio features a simple hardware and software combination that allows even nontechnical users to make video recordings in a studio environment. Users must plug a flash drive into the USB port, push a button to start recording and remove the flash drive when finished. From a flash drive, the user can upload it to their course site in Sakai.