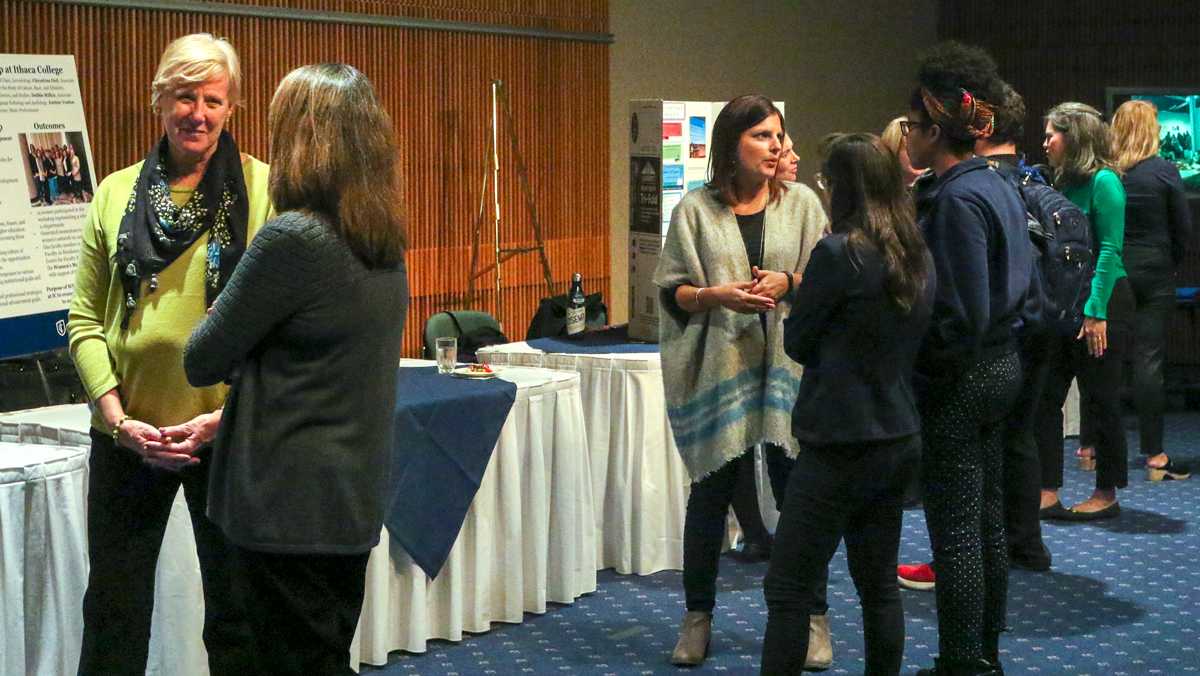 Brianna Mottey/The Ithacan
The Seed Grant Fair, held on Oct. 15, provided a space for the Ithaca College community to learn about and reflect on the 2017-18 projects funded by the President's Seed Grant Initiative. Seed grant applications for the 2018–19 academic year are due Nov. 2.
By Sydney Keller — Contributing Writer
Published: October 29, 2018

With the application deadline approaching for the 2018–19 President’s Seed Grant Initiative, Ithaca College hosted a fair to reflect on the previous year’s projects, many of which are now in full swing.

The Seed Grant Initiative began with President Shirley M. Collado. The goal of the president’s initiative is for faculty and staff to pitch their ideas on how to facilitate cross-disciplinary collaboration and develop innovative ideas. Only faculty and staff can apply for the grant funds, but students may act as project members.

After applicants pitch their ideas, the president selects the winners in collaboration with recommendations from a grant committee comprised of students, faculty and staff. There were 13 winners for the 2017–2018 academic year, and there were 54 applications. Applications for the 2018–19 academic year are due Nov. 2.

The Seed Grant Fair, held Oct. 15, encouraged faculty, staff and students to talk with presenters about their achievements from the 2017–18 academic year. The fair occurred in the Emerson Suites from 3 to 5 p.m. Approximately 30 people attended the event.

Senior Subin Lee, who attended the fair, said she is personally interested in how the seed grants can facilitate collaboration on campus.

“I am a very collaborative person,” Lee said. “When I see a problem within the system or something potentially that I can develop further into, I want to tackle that. I really think that opening up this collaboration with students and professors to create a better innovative collaboration within the whole school is a great idea.”

Lee attended the event because she was looking into ways to improve collaboration throughout the college. While she was doing research, she found out about the Seed Grant Initiative. Lee said she wants to participate in a seed grant initiative in the future.

Belisa Gonzalez, associate professor and director of the Center for the Study of Culture, Race and Ethnicity, and her team presented their project, “Retreating, Advancing, and Writing: Creating a Writing Program for Early Career ALANA Faculty.”

“We primarily used our money for off-campus writing retreats for early-career ALANA faculties, people with racial and ethnic identities who are early-career here at IC,” Gonzalez said.

Gonzalez said the publishing process is a challenge for faculty of color due to the taxation of unacknowledged service.

“The main obstacle is publishing,” said Gonzalez. “We talked to a lot of students and are asked to be on all kinds of committees. Since publishing is the main criteria for tenure, along with teaching, we get taxed for unseen labor. Writing retreats were a direct response to that … trying to really just give people guarded time to write with other people who are also writing. We just want to create a supportive community.”

Sebastian Harenberg, assistant professor in the Department of Exercise and Sport Sciences, and his team presented their project funded by the seed grant, “Using 360 degree videos for immersive learning experiences” at the fair.

Harenberg said he used his grant to purchase 11 Rylo 360-degree cameras to work on multiple projects and potentially involve them in lab classes, video production and conducting research. He said he also used the grant money to purchase a gaming computer to do video editing with and cardboard headsets for students to put their cellphones in to experience virtual reality video.

Senior Tara Stilwell, a member of Harenberg’s initiative, said she is interested in how video can be used in the coaching of players.

“I have never been a technology person, but this project itself has made me come out of my comfort zone and learn stuff I never thought I would get to learn,” Stilwell said. “Second semester last year, I was talking with Sebastian, brainstorming different ideas of what my senior project should be and what realm of sport psych I was interested in. We came across people using video for decision-making as an intervention because we also have something at our lab called the NeuroTracker.”

Stilwell said that she is also on the volleyball team and that many different sports coaches are interested in how the video technology can help them with their coaching and players.

Barbara Belyea, clinical professor and associate chair of the Department of Physical Therapy, presented her seed-grant project, “Step UP! Training for Bystander Intervention,” at the fair as well.

The Step UP! program is a bystander intervention program designed to give students the skill set to be active in helping others. Belyea said her project tries to address behaviors such as hazing, sexual assault and binge drinking. Developed by the University of Arizona C.A.T.S. Life Skills Program and the National Collegiate Athletic Association, the training reviews the bystander effect, relevant research about it and teaches intervention skills. A study conducted at three universities found that nearly 90 percent of students said a problem could have been prevented with intervention, and 85 percent of student–athletes said they wanted to learn intervention skills. Situations that might require intervention could be discrimination, drug abuse or hazing, for example.

“We used our seed grant for our team to go down to Florida in May to receive training,” Belyea said. “The bystander effect is a psychological phenomenon that the more people you are around, the less likely you are to help someone out because you assume that ‘no one else is helping, so why should I?’”

Belyea, a faculty athletic representative for the college, traveled to Orlando with three other members of the college community: Will Rothermel, associate director in the Department of Intercollegiate Athletics; Mary Holland-Bavis, associate director for student involvement in the Office of Student Engagement; and senior Maddie Keppel. They spent three days in the training program and came back to share the skills they acquired with some of their student–athletes.

“Our goal is to have every student–athlete trained in the program,” Belyea said.

Belyea said she wants everyone on campus to be able to have the confidence to intervene in situations in which students may feel uncomfortable. She said she wants students and people from athletics and campus life to all be involved in the program.

Other projects, as previously reported in The Ithacan, include a women’s networking initiative, sustainability week and a variety of other initiatives.