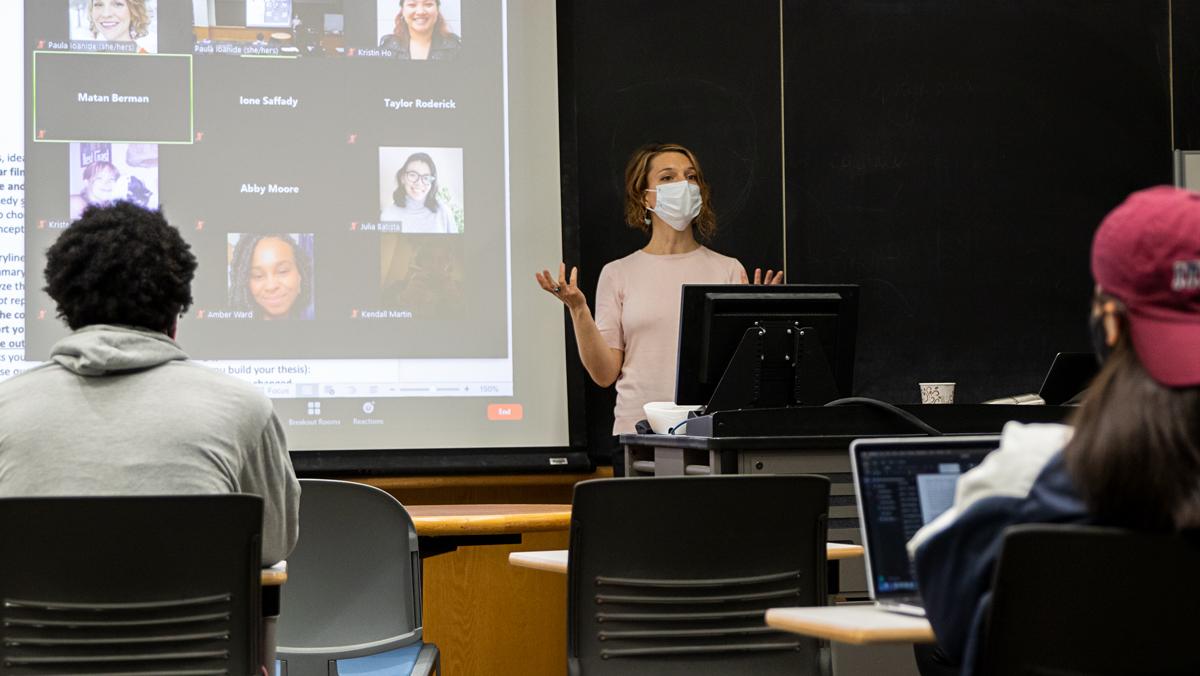 Ash Bailot/The Ithacan
Paula Ioanide, professor in the Center for the Study of Culture, Race and Ethnicity (CSCRE), was one of the faculty members who contributed to the creation of the CSCRE major.
By Alyshia Korba — Assistant News Editor
Published: April 15, 2021

Ithaca College will be offering its first major in the Center for the Study of Culture, Race and Ethnicity (CSCRE). The race, power and resistance major will become available in Fall 2021.

The CSCRE previously only offered minors including African diaspora studies, Asian American studies, Latino/a studies and Native American studies. Belisa González, associate professor in the Department of Sociology and director of the CSCRE, said the major will provide students with an interdisciplinary education of race inequality.

“The race, power and resistance major will feature an unapologetic focus on race and power inequalities in the U.S. and the diaspora, delivered by a core faculty with strong and varied research and teaching profiles,” González said via email.

González said that creating this major has been a goal of hers since she applied to be the director of the CSCRE six years ago. She said the CSCRE has been working on forming the major for approximately two to three years. During the process of creating the major, the CSCRE held events to consult with students about what should be included in the major.

The CSCRE was first developed in 1999 and celebrated its 20th anniversary in 2019.

González said the major will provide a more in-depth education on race and power than can be achieved with the minors in the CSCRE. She said students will have the option of focusing their studies on African diaspora, Asian American, Latino/a or Native American studies or studying across all four areas.

The major will require 36 credits, which will include core courses like: Introduction to Culture, Race and Ethnicity Concepts; Critical Race Theory; and Capstone Seminar in Culture, Race and Ethnicity. The rest of the credits can be obtained through elective courses within the CSCRE, as well as other departments. González said the major was designed so it can be taught by faculty who are already at the college, and no additional faculty members will be necessary to teach in the major.

Paula Ioanide, professor in the CSCRE, worked with González, other faculty members and students on the conceptualization of the major. She said the interdisciplinary nature of the major makes it valuable for all students regardless of their desired career path.

“I think it’s essential for all students who attend college to prepare them effectively for the world that they are in and that they will encounter in their respective workforces,” Ioanide said. “The world is becoming more and more racially and ethnically diverse. The United States is becoming more racially and ethnically diverse. Demographics are changing. Cultures are changing.”

González also said she believes the major is important to have because of the rise in racial tensions globally. The U.S. saw Black Lives Matter protests across the country in 2020 following the killings of George Floyd, Breonna Taylor and Ahmaud Arbery.

“We believe the development of the race, power and resistance major is particularly crucial at this moment as people across the globe protest anti-Black racism and pay attention to the inequalities exposed by the coronavirus pandemic,” González said via email.

Junior Sebastian Chavez is a politics major with a minor in Latino/a studies, but he said he would have opted for a major in the CSCRE if it had been available when he started at the college.

Chavez said his studies within the CSCRE for his Latino/a studies minor have been valuable to him as a politics student and as a student of color. Chavez said he also believes it is important for all students to learn about race and power dynamics in the U.S.

“This program, the CSCRE, allows for more diverse inclusion, equitable education and a curriculum that is inclusive to BIPOC students,” Chavez said. “But it also provides an opportunity for non-BIPOC students to learn about the oppressive issues that Latinx, marginalized communities like the Asian American community, the Black community, transgender community, what they’ve been going through since the start of the U.S.”

Ioanide said she hopes students who study in the CSCRE, whether they complete the major or just take a course, can challenge racial structures within their careers after they graduate.

CSCRE major program will put diversity at the forefront