A $30 million project announced to Ithaca’s Planning and Development Board on Oct. 23 could bring greater density and new jobs to downtown by 2014.

The project, headed by L Enterprises, LLC in Horseheads, N.Y., will renovate a block on The Commons known as “Harold’s Square.” The project is currently under site review by the Planning and Development Board. If the board approves the project, construction is expected to start by spring of 2013 with a duration of 18 months, according to David Lubin, president and co-owner of L Enterprises. 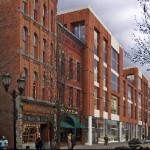 According to a press release from the Downtown Ithaca Alliance, this area includes the Henry Miller building, which will be renovated, as well as the former Alphabet Soup and Race Office Equipment buildings, which will be replaced.

In addition to adding new residences, the new building will potentially create between 110 and 150 full-time office positions as well as 100 construction jobs during the course of renovation, according to a press release.

“The plan talks a lot about the densification of downtown while at the same time trying to protect and maintain a strong street front with a lot of character and pedestrian capabilities,” Ferguson said.

The 2020 strategic plan, released in 2010, emphasizes adding extensive housing, retail and office space within this decade. Specifically, the plan calls for at least 1,500 housing units and 78,000 square feet of retail space. The plan also calls for a reassessment of parking situations downtown and to “enliven The Commons as a public space, visually and functionally.”

The current buildings in the Harold’s Square area are owned by Lubin. According to JoAnn Cornish, director of the planning and development board, Lubin and his family have owned the Henry Miller building and other sites on The Commons since 1969.

Lubin said this location would allow a building that could increase density without towering over The Commons.

“There’s only so much of downtown,” Lubin said. “Because all the transportation’s there, because all the services are there, we want some density.”

Cornish said the planning and development board has been working with Lubin for the past four years to organize the project.

Lubin said he believes The Commons and downtown will become a more active business center after the renovations.

“Hopefully I will be bringing in new retailers that will be a complement to what exists on The Commons, hopefully tenants that will be cross-generational and create a better marketplace downtown,” Lubin said.

“Any time you have a new project that incorporates higher density residences, it’s going to be a benefit to the downtown district,” Bliss said. “It can only be a bonus.”

Ferguson said the additional jobs and residences have the potential to be a huge economic boom for other local businesses.

“If you get several hundred workers who work out of that space, they’re going to shop, they’re going to dine right around their building,” Ferguson said. “With the housing, it’s right where we want them to be, right in the center of things.”