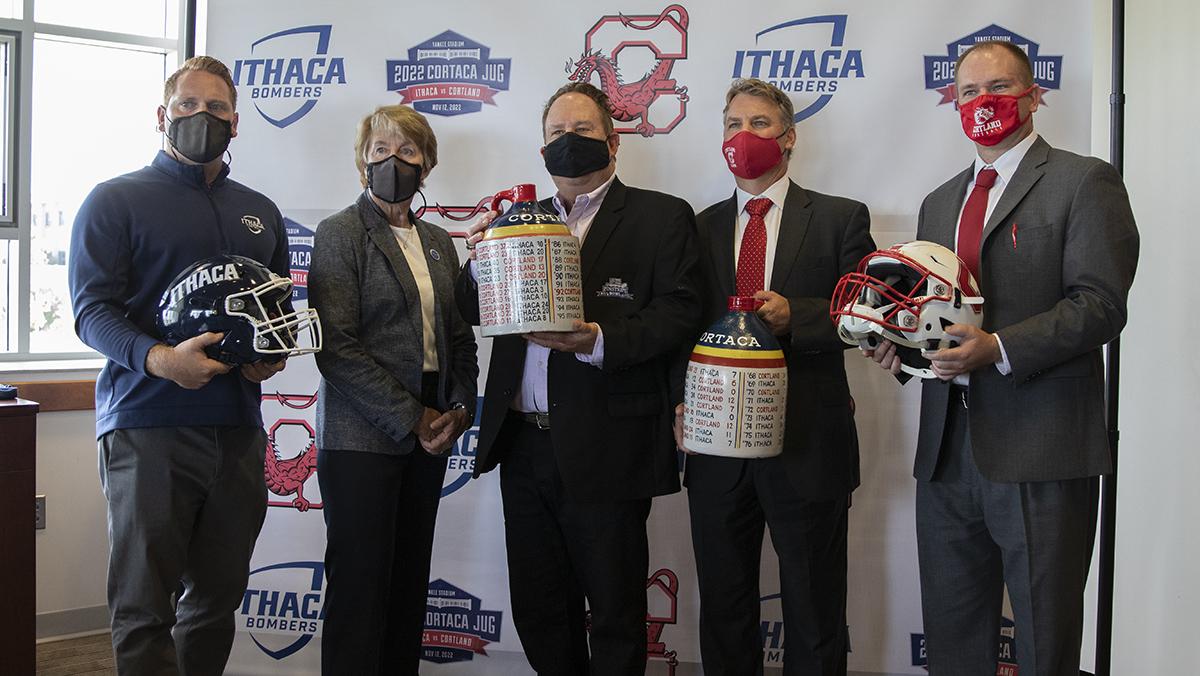 When the 61st annual Cortaca Jug game between Ithaca College and SUNY Cortland was held at MetLife Stadium in 2019, the game drew an audience of 45,161 — a Division III record. The game will be held at Yankee Stadium in November 2022 and representatives from both institutions have made it clear that the goal will be to break that record.

The two schools held a joint press conference along with a representative from the New York Yankees on Sept. 21 when the game was announced. Susan Bassett, associate vice president and athletic director for Ithaca College, said Ithaca College, SUNY Cortland and Yankee Stadium are aiming for a sellout crowd.

“We think we could break the record we set in 2019 [at MetLife Stadium], but everything has to line up just right,” Bassett said. “This is the opportunity of a lifetime for our football program, our athletic department, and the college in general.”

Although the game will not be held until 2022, talks  have actually been going on since well before the 2019 Cortaca Jug game, Mike Urtz, athletic director for SUNY Cortland, said.

“[Bassett] approached me several years ago about the possibility of ever playing in Yankee Stadium,” Urtz said. “It kind of went to the backburner and didn’t come to fruition, obviously. And then the whole MetLife concept started to come into play.”

Mark Holtzman, vice president of non-baseball sports events at Yankee Stadium and New Era Pinstripe Bowl, said scheduling conflicts prevented the game from happening in 2019 since the venue has a limited number of football games it can host per year.

This news drew mixed reactions from the Ithaca College community. Matt Price ’20, said he was surprised to see the game played in another big venue so soon after it was held in MetLife Stadium.

“I thought they would do it in, like, maybe five or 10 years’ time,” Price said. “But still, to have it at a venue like [Yankee Stadium], it’s absolutely phenomenal.”

Not everyone shares Price’s optimism. Senior Julia Machlin, a member of the Open The Books coalition, a group of college community members who are calling for increased financial transparency, said the announcement was surprising for different reasons. The coalition formed because the college is in the process of eliminating 116 full-time equivalent faculty positions as part of the Academic Program Prioritization process, as a result of the COVID-19 pandemic amplifying the college’s financial issues.

“It’s a big declaration to say and to make, even if it’s in two years, that a lot of money and a lot of resources will be allocated to Cortaca when there are so many people who are still feeling the effects of being laid off from the college,” Machlin said.

Tim Mirabito, assistant professor in the Department of Journalism, also said the unknowns of specific financial details make the optics of the game worse.

“The contrast of having layoffs occur and then very shortly after having a football game at a professional stadium implies that are costs that would be, you know, much more suitably applied to retaining faculty or going back into the academic budget,” Mirabito said. “I do think that, from an optics standpoint, it is a tough look.”

Bassett said all of the travel expenses for both Ithaca College and SUNY Cortland are being covered by promoters Hudak and Bob Garone ’87. However, she declined to comment on the exact expenses of the event.

“For the athletic department, it’s a budget neutral event,” Bassett said. “For the college, it’s an opportunity for enormous positive publicity in the tri state area and metropolitan New York.”

“I know that atmosphere, regardless, is fantastic and it draws in a huge crowd on the South Hill,” he said.

Bassett said cancelling the game in 2020 forced some shuffling that led to the college giving up a home game in return for the chance to play at Yankee Stadium.

“In order to get [SUNY] Cortland to participate, we felt like, in fairness, we had to give them the opportunity [to host in 2021],” Bassett said. “We were the hosts of the game in 2019; 2020 didn’t happen, so it didn’t seem fair for us then to host this year, because why would [SUNY Cortland] agree. We really wanted to make the Yankee Stadium thing work.”

Mirabito said he thinks that holding the Cortaca game at Metlife and Yankee Stadium are fantastic for alumni.

“There’s obviously a ton of people that have connections to Ithaca College that live in and around New York City, which is great,” Mirabito said. “But when you start to do things like this, and especially the way that the calendar has fallen … we’re eliminating home games for our students.”

Bassett said the success of the game at MetLife Stadium led to a conversation about something similar happening every four years or so. She said the college’s alumni raised over $100,000 on the day that the rivals faced off at MetLife Stadium in 2019.

The main reason the college agreed to play at Yankee Stadium shortly after the 2019 Cortaca Jug game, Bassett said, is because the venue does not have an opening other than 2022 until 2027.

However, Holtzman said, if the game goes as well as expected, there is a possibility of the game being held there again in the future.

“Certainly, if the game is as successful as we all believe it would be, we’d want to have it back here at some point in the future,” Holtzman said. “But I think you want to also keep the specialness of it. You would have to figure out, you know, how many years apart you would want to have the games.”