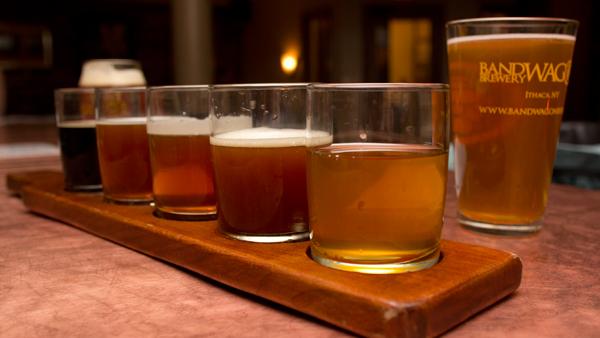 While artisanal beer is on the rise nationally, local microbrew fans find themselves in the midst of a craft beer renaissance.

Local brewers are peddling all sorts of beers throughout Tompkins County, which has one of the highest per capita craft brewery ratios in New York. Peanut butter-chocolate porters, banana brews and raspberry jalapeno ales brewed by locals are staples on taps in bars and restaurants in the area. These local beers, spanning a sundry variety in color, aroma, type and flavor, are all considered craft beers.

“We span a wide spectrum of craft beers [in Ithaca],” Lars Mudrak, Head Brewer at Bandwagon Brew Pub, said. “There’s big and small and a range of different tasting beers.”

Craft beer is a booming industry in the midst of a historic rise in popularity and economic influence. The City of Ithaca and Tompkins County boast a lively craft beer scene with six craft breweries: 3 Herons, Bacchus, Bandwagon, Ithaca Beer, Rogues’ Harbor and Scale House, with a seventh, Hopshire, on its way in early May.

As the market for craft beer has grown, award-winning craft breweries, supported by a population with a spirit of local solidarity, have propelled the Ithaca-area industry into prosperity.

While the craft brewing industry rises, it faces a number of challenges from production limitations and larger-company poaching. Area craft brewers are rising to meet these challenges and proving that the spirit of artisanal brewing is alive and well in Ithaca.

Craft beer is distinct in nature from non-craft beers, in both a business and product capacity. According to the Brewers Association, a craft brewery must produce less than 6 million barrels — one barrel is 31 gallons — of beer per year. It also must be independently owned. An alcoholic beverage industry member that isn’t a craft brewer can’t own more than 25 percent of the brewery.

On the product end, Allison Graffin, director of marketing for Ithaca Beer Co., said craft beers are known for following brewing traditions, like sticking to the core four ingredients of malt, water, yeast and hops, while creating exciting new flavors with a wide range of ingredients.

Graffin said craft beer is all about the taste and getting the best product possible out of the ingredients, as opposed to focusing on expanding profit margins.

“Many of these mega-brands like Anheuser-Busch make beers that act just like an alcohol-delivery system and don’t provide as quality of an experience,” Graffin said. “They could be rice-based or corn-based, but craft beers provide a wide variety of quality, traditional tastes.”

Currently, there is contention in the brewing industry between large “mega-brands,” like Anheuser-Busch and MillerCoors, and craft breweries. Last December, the BA sent an open letter to larger companies demanding transparency and condemning the practice of marketing non-craft beers with a craft aesthetic without telling customers that it isn’t a craft beer.

“When someone is drinking a Blue Moon Belgian Wheat Beer, they often believe it’s from a craft brewer, because there is no clear indication that it’s made by [MillerCoors].”

The BA said in the letter that the lack of transparency on the bottle about what company brews the beer is deceptive toward the customer and ultimately harmful. Graffin said the current trend of larger brands buying and selling former craft beers is unfair toward the buyers, because they aren’t telling the consumer that it is no longer a craft beer.

“Right now, mega-brands are buying up craft brands to add to their portfolios, and they’re really screwing up the customer,” Graffin said. “You’ve got Blue Moon and Shock Top and Goose Island that used to be craft beers, but now they’re mega-brands, and the consumers don’t know it and aren’t given that information.”

In the beer industry, being a craft brewery comes with advantages and disadvantages. Mudrak and Brian Rettger, assistant brewer at Bandwagon Brew Pub, said being a smaller, craft-brewing operation allows them license to experiment and give drinkers a larger variety of tastes.

“We can try some adventurous, crazy things and really push the envelope,” Mudrak said. “If we screw up, we dump it, and we don’t lose much cost or time. We really have free reign to try as much as we want.”

Mudrak and Graffin both said the smaller, craft-brewing setup has given them an opportunity to really get to know and connect with their clientele. Forming relationships with the customers has helped them learn what the people want to drink and better cater to their drinkers.

“The close connection lets you know what the market is like right as it’s changing,” Graffin said. “If we see a trend in a stout, if something is really taking off, we can have it worked into our system relatively quickly.”

Craft breweries are at a disadvantage as far as reach and distribution go. With smaller operations and less resources, craft breweries can’t distribute as widely as larger brands.

Despite these disadvantages, the craft beer market is rising. On a national scale, craft beer sales have doubled in the last five years. According to Mintel, a research group based out of Chicago, craft beer sales were at $5.7 million in 2007 and shot up to more than $12 million last year. Mintel forecasts that by 2017, that number will rise above $17 million.

This forecast is based on the steady expansion of the industry. In 2011, the BA reported 250 craft brewery openings and only 37 closings. Graffin said more than 450 are slated to open nationwide next year — more than one brewery opening per day.

In New York, the beer industry contributed more than $5 billion in economic output in 2012 and provided 61,930 jobs according to the National Beer Wholesalers Association. Almost 1 billion of those came from the 24th congressional district, where Tompkins County is located.

Gov. Andrew Cuomo signed legislation in July 2012 that has helped increase production and revenue gains for in-state craft breweries by cutting taxes on “some of the finest craft beer in the world” and exempting small breweries from annual state liquor fees.

“These tax credits will help encourage the continued expansion of New York’s craft brewing industry,” Cuomo said in the bill.

“In 10 years, we might have up to or over 20 percent of the market share,” Katleski said. “There’s a changing sensibility of the American palate that’s leading people to craft beer, and right now, we’re seeing a resurgence of craft beer in New York.”

Nicholas Moe of the Finger Lakes Beverage Center carries between 1,100 and 1,200 beers on hand at any given time, about 900 of which are generally craft beers.

Senior Josh Grazul owns a plot of land in Freeville, where he grows hops and brews his own beer. He said the local popularity of craft beer harkens back to the area’s rich history in farming.

“It stems from the hops,” Grazul said. “Central New York used to be one of the biggest producers of hops in the country, and from that a culture of brewing started and stuck around.”

Others, like Graffin, Mudrak and Katleski, attribute the popularity in the area to a propensity for supporting local business. Members of the Ithaca community, they said, are dedicated to supporting small business. Their support has helped bring jobs into the area.

In just the last year, the staff at Ithaca Beer Company has doubled from 15 to more than 30, putting extra jobs and revenue into the community.

“Craft breweries keep jobs in the area,” Katleski said. “They’re very beneficial to the economy. They bring in more jobs and help out more people in the community than the Budweisers of the world.”

Graffin said the heavy draw of tourists to the Finger Lakes Wine Trail has also bolstered business. People go to the wine trail for wine, but many find they would rather drink beer. This caused the creation of the Finger Lakes Beer Trail, which contains all of Ithaca’s craft breweries.

Mudrak and Scale House brewer Steve Fazzary said when tourists come in to try the beer, they always recommend going to check out the other brewpubs. Fazzary said this spirit of camaraderie has helped all of the businesses grow.

Graffin said the high amount of students in the area contributes greatly to the popularity of craft beers in Ithaca.

“There’s two colleges right in Ithaca and a few like SUNY-Cortland that are very close,” Graffin said. “There’s a college contingent that has an effect on popularity.”

Mintel’s research shows that younger drinkers are more inclined to drink craft beer. About 50 percent of the youngest age group surveyed for their data — 25 to 34 year olds — said they preferred craft beers.

Junior Isaac Ford brews beer in his apartment off campus, a small setup with just enough to make small batches. He has noticed the rising popularity of brewing but still doesn’t quite understand why it isn’t even more popular.

“I’m surprised more people don’t do it, especially under 21,” Ford said. “It’s pretty cheap and almost guaranteed to taste better than a Keystone.”