Dining Services at the college work to solve understaffing 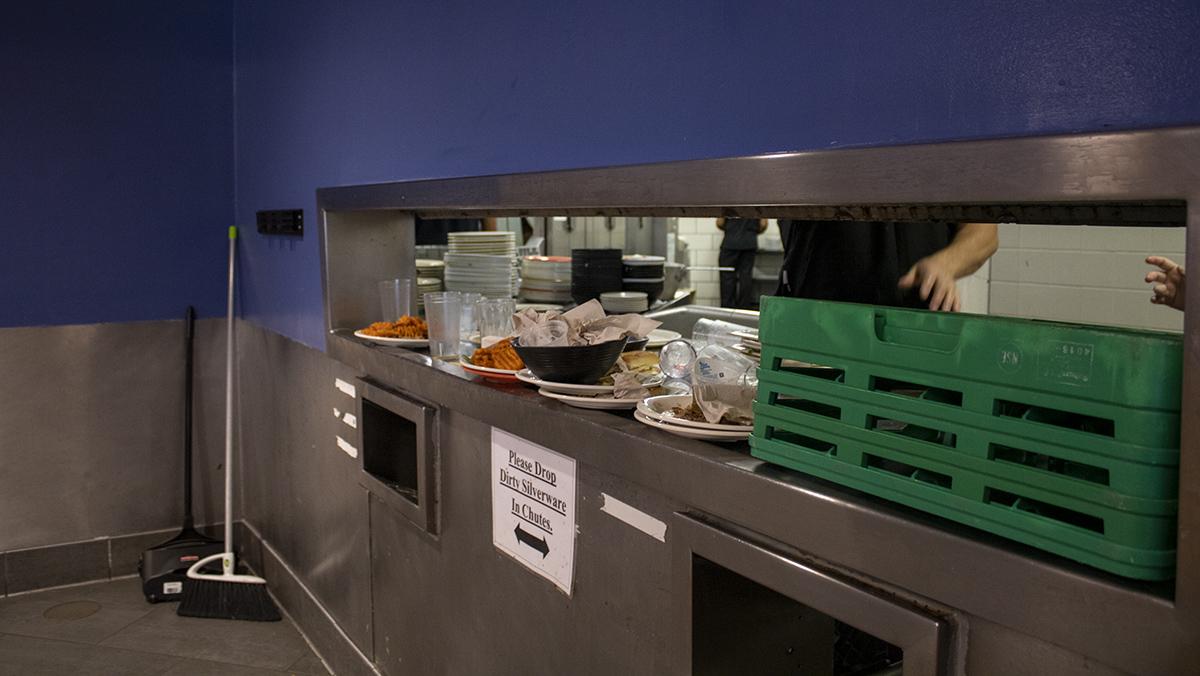 Ithaca College’s Dining Services are working to solve its understaffing issue in preparation for a new dining model budgeted to launch in Fall 2023.

Dining Services is piloting the Referral Bonus Program and reevaluating the pay scales of dining employees in an effort to fill the vacant staff positions before the end of the 2022–23 academic year. Then, once the full number of needed employees are hired, the college plans to implement a new dining model to de-densify Campus Center Dining Hall (CCDH) and expand dining options for students. This model will allow students to use their meal swipes at all retail locations on campus, similar to how the Express Cafe works on the second floor of Campus Center.

As of Oct. 25 there are 40 vacant positions in Dining Services and 17 of the positions are cooks. The most noticeable impact of understaffing is that Towers Marketplace has been closed until more staffing can be secured. All dining hall staff have been moved to either Terrace Dining Hall (TDH) or CCDH, but there continue to be staffing shortages in the kitchen, serving stations and the dishroom.

Justin Fenner, executive sous chef in CCDH, said the lack of staff is reducing the quality of service for students. If there is not enough staff to work the different stations, stations have been closed temporarily, which Fenner said is one of the modifications made to adapt to the number of staff available. The CCDH has also resorted to using disposable plates and utensils during shifts when the dish room cannot be filled.

“[More] student employment would help out because they serve the food a lot,” Fenner said. “There’s more stations that could be opened if we had more staff, so that [students] would be able to go to more stations and the lines wouldn’t be as big.”

While some limited services impact students’ dining experience, Fenner said the current staff are not under too much strain.

“We all work very well as a team,” Fenner said, “If somebody’s not here, somebody else will step in and help out. … It just sucks for [students], not so much for the cooks back here, because we want to see [students] more happy and be able to serve you guys better.”

Reginald Briggs, associate director of Dining Services Administrative, said the limited hours and services because of understaffing is just as frustrating for Dining Services as it is for students, but there is only so much that he can do to bring in more staff.

“It’s unfortunate, like we didn’t want to [close Towers Marketplace],” Briggs said. “We got a bunch of flack from everybody. … We were like, ‘We literally don’t have enough people in order to be able to pull this off.’”

The pilot version of the new Referral Bonus Program is an incentive for benefits–eligible employees to recruit dining staff. Benefits–eligible employees include employees that work at least 1,000 hours each fiscal year, faculty who teach at least 14 credit hours each academic year and salaried staff. In the current model of this program, students are not eligible to receive this bonus. If an employee makes a referral and that new staff member is hired, the employee who referred them will receive a $200 bonus after 30 days of the new employee working and $300 after 180 days of working.

As of Oct. 25, 15.6% of the annual dining budget allocated for paying student employees has been used, which Tim Downs, vice president for Finance and Administration and chief financial officer, said is essentially half of what should have been spent at this point in the year. Downs also said he needs to find the right amount of incentive that does not make dining benefits imbalanced with other campus jobs.

Downs said another area Dining Services is focusing on is reviewing the pay scales for employees. He said this review is an attempt to be proactive as the minimum wage in New York is increasing from $13.20 to $14.20 an hour starting Dec. 31 and will raise up to $15 an hour Dec. 30, 2023. Currently, payment for student employees starts at $13.20 an hour. Downs said Dining Services is assessing if there will be any compression issues to make sure student wages are not too close to the full-time staff pay levels.

Downs said that depending on how the new minimum wage impacts student labor, Dining Services will assess the need for a Bomber Bucks incentive. This would entail students receiving their hourly pay in addition to an undecided ratio of Bomber Bucks per hour worked.

Downs said in addition to staffing, the college also needs to wait to implement this model until they have the technology to operate with meal swipes and Bomber Bucks. He said there would also need to be changes to the meal plan options to limit the number of swipes used each day, but he said those details have not been worked out yet.

“We don’t want people worrying about food, but we don’t want to create a situation where people are swiping and they’re out of swipes by Wednesday,” Downs said. “We want to make sure we’re doing something that works for everybody.”