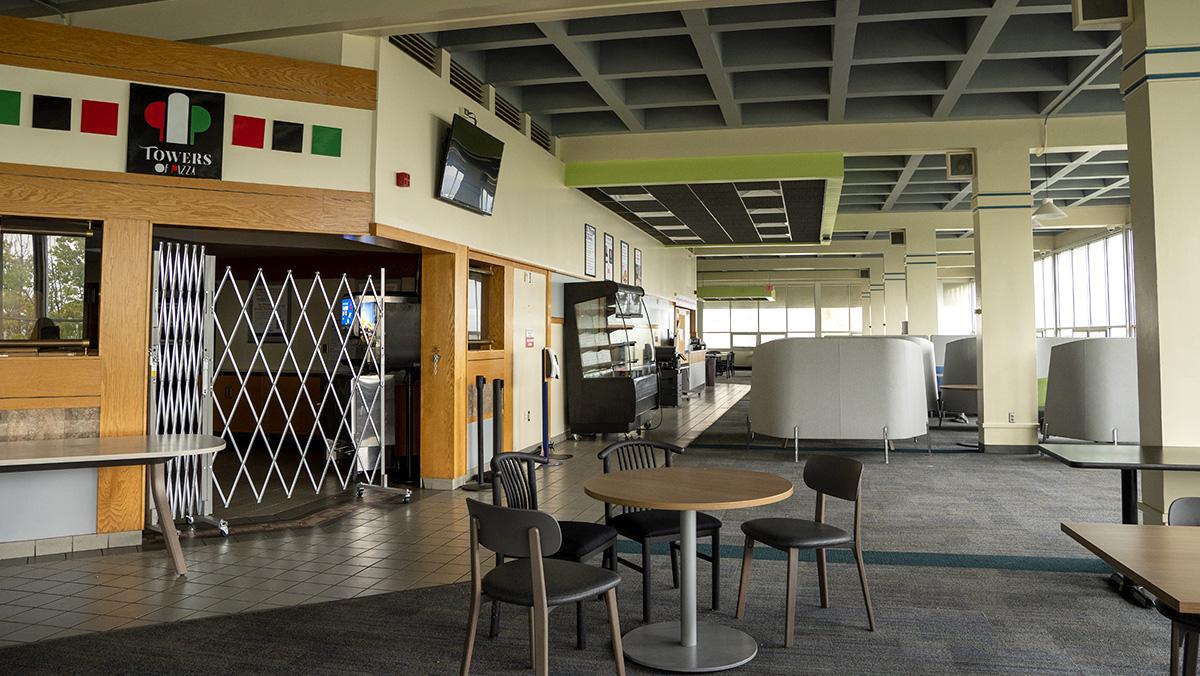 Towers Marketplace at Ithaca College has not opened for the fall semester, despite plans announced during summer 2022 to expand the location’s hours and food offerings.

At the virtual All-Student and Family Gathering on July 27, Scott McWilliams, director of Dining Services, said Towers Marketplace would be open for expanded hours in Fall 2022. This included opening Monday through Friday from 8 a.m. to 11 p.m. and Saturdays from 5 to 11 p.m., as compared to the hours for the 2021–22 academic year, when Towers Marketplace was only open from 5 to 11 p.m. Thursday through Sunday, as previously reported by The Ithacan. However, when students arrived on campus, Towers Marketplace was not open and the college community was not explicitly informed of the closing or given any further information.

Reginald Briggs, associate director of Dining Services, said the decision was made to temporarily close Towers Marketplace because of understaffing issues.

Johnson said she feels the closing of Towers Marketplace limits food options, particularly for people who have dietary restrictions and cannot eat everything at the dining halls. Johnson said she was vegetarian all of the 2021–22 academic year.

“I got sick pretty often because I was a vegetarian and couldn’t eat a lot of protein,” Johnson said. “[Other dining locations] had some options that accommodated [being vegetarian], but on the weekends [at Towers Marketplace] I would have an impossible burger or a salad or I would have their sandwiches that have veggies on it, and I got to eat more for, like, the same meal swipe as the dining hall, and it will provide me with more nutrients and just fill me altogether.”

Johnson said she feels her shifts at Terraces Dining Hall are at inconvenient times and she is less useful than at Towers Marketplace. According to the email from Hebbard, while Johnson and other staff members were at Towers Marketplace, they were able to pick their shifts, but in the move to Terraces Dining Hall, new shifts were assigned to the employees.

“I can kind of tell that I’m not really needed there, because I walk around in circles most of my shifts, like, waiting for things to happen,” Johnson said. “That time can be easily spent working at Towers or keeping Towers open.”

Johnson said the atmosphere at Terraces Dining Hall is also less desirable to work in. She said the management treats staff with less respect and she feels that Towers Marketplace was a more enjoyable place to work.

“I think that from what I’ve seen, a lot of people really blame Towers or even the college for the issue, and it’s really, you know, students who don’t want to work at Towers,” McKelvey said.

Sophomore Sandra Ramos said she was disappointed to see that Towers Marketplace was not open and had looked forward to eating at the dining hall during the semester. Ramos said she feels that without Towers Marketplace, the food options are extremely limited at the college, especially on the weekends when the Terrace and Campus Center Dining Halls offer brunch for much of the day.

“The price that we pay for the meal plan, you don’t see it reflected inside of the options that they have as dining,” Ramos said. “I know we get Bomber Bucks, but unless you live off–campus, you get more value in Bomber Bucks than you do if you live on–campus. So it really doesn’t make a difference.”

Grubhub to come to Towers Marketplace