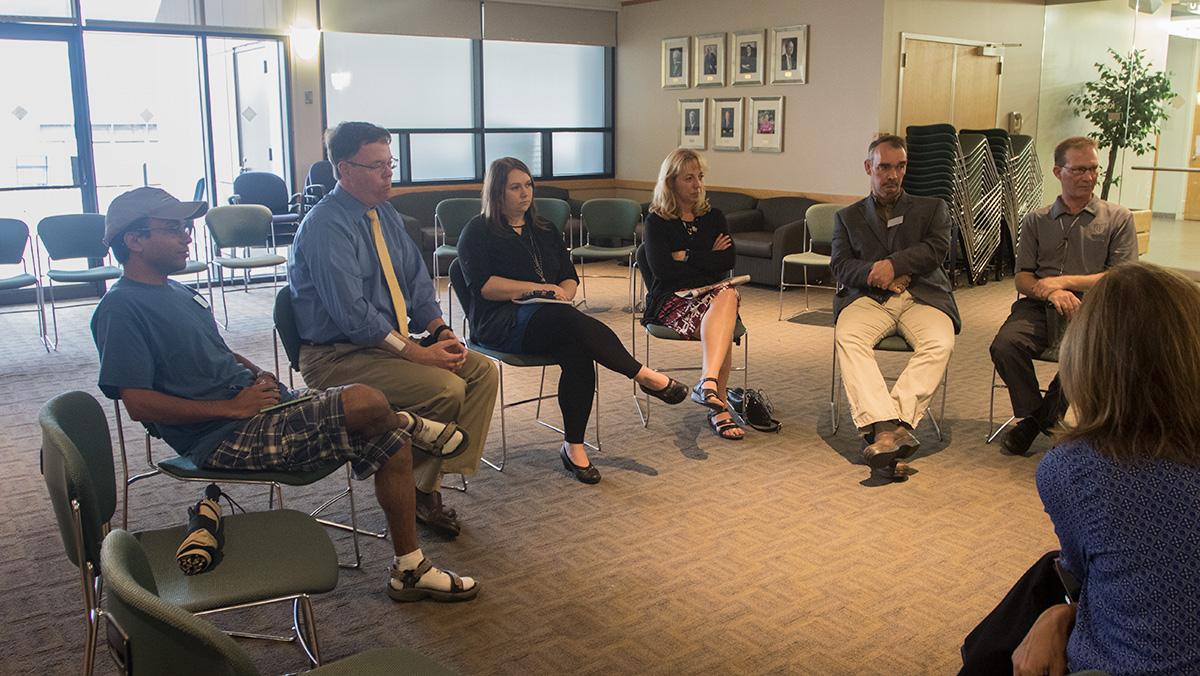 Averi Parece/The Ithacan
Although the Diversity and Inclusion Discussion Circles were created last fall in response to student criticism that diversity and inclusion was not prioritized at the college, students rarely show up to the meetings. As shown above, mainly faculty and staff participate in the discussions.
By Rachel Kreidburg — Contributing writer
Published: September 19, 2016

A group of representatives at the college organized the first of these Diversity and Inclusion Circles in November — led by Gerald Hector, previously the Vice President for Finance and Administration. The goal was to create a space for individuals from different backgrounds at the college to come together and discuss issues of race and inclusion.

Jaimie Voorhees, assistant to the vice president for finance and administration, took over as the lead facilitator of the group earlier this academic year.

“This group cares about making the college better,” Voorhees said. “I think one of the more important ways it is doing that is taking the taboo out of talking about race.”

However, a lack of participation from the student body has disappointed those involved. Virgilio Pinto, Interlibrary Loan lending coordinator, is a more recent regular attendee of these meetings and said he has also noticed the absence of students.

“The group is open to students, faculty and staff,” said Pinto. “But unfortunately, we haven’t seen many students at these meetings.”

At the Sept. 4 meeting, out of approximately 30 participants, none were students. The following week at the Sept. 11 meeting, there were fewer members present and still no students.

Many students said they were unaware that Diversity and Inclusion Circles existed at the college. However, many who said they had not heard of the group still believed it served an important purpose in bringing to prominence issues of diversity on campus.

“There’s an ongoing issue going on with this campus,” sophomore Jackie Scheiner said. “It’s not going to improve unless people are made aware.”

Junior Sarah Vengen said she thinks there’s a general interest on campus across the faculty, the staff and students to participate in groups such as these. However, she said there needs to more awareness that groups like these exist.

“It’s so important to keep programming like this present on a campus that definitely has some work to do,” Vengen said. “I’ve never heard one of my teachers or friends complain about diversity programming. I think they’d be interested if they knew what was going on.”

Vengen said she thinks the group needs to improve its outreach. Since its inception, the group has used Intercom to communicate meetings.

Marieme Foote, Student Government Association president, said there has not yet been any effort from the group to reach out to student organizations to garner student interest.

“We haven’t really been reached out to about getting more students involved,” Foote said. “I’ve just heard from word–of–mouth that the group exists.”

Foote said she was disappointed by the lack of outreach from the Diversity and Inclusion Circles to student groups on campus.

“What I’m seeing right now is a high level of engagement,” Foote said. “Students are really curious, and they want to do something. They just don’t know how or where they can go.”

However, Mary Knapp, senior applications developer for the Department of Engagement and Implementation, who is also involved in the group, said they have been looking for ways to get more students involved through social media.

“Every time you ask someone how they’re notified about events, the answer is different,” Knapp said. “We definitely need to work at communicating across social–media platforms.”

Pinto said the group has started a Sakai page and has continued posting announcements in Intercom to acquire more student interest.

“It is a space for learning and sharing and growing, for whoever attends,” Pinto said. “There is a rewarding frankness that comes out in such spaces where people can be open about their learning journeys.”