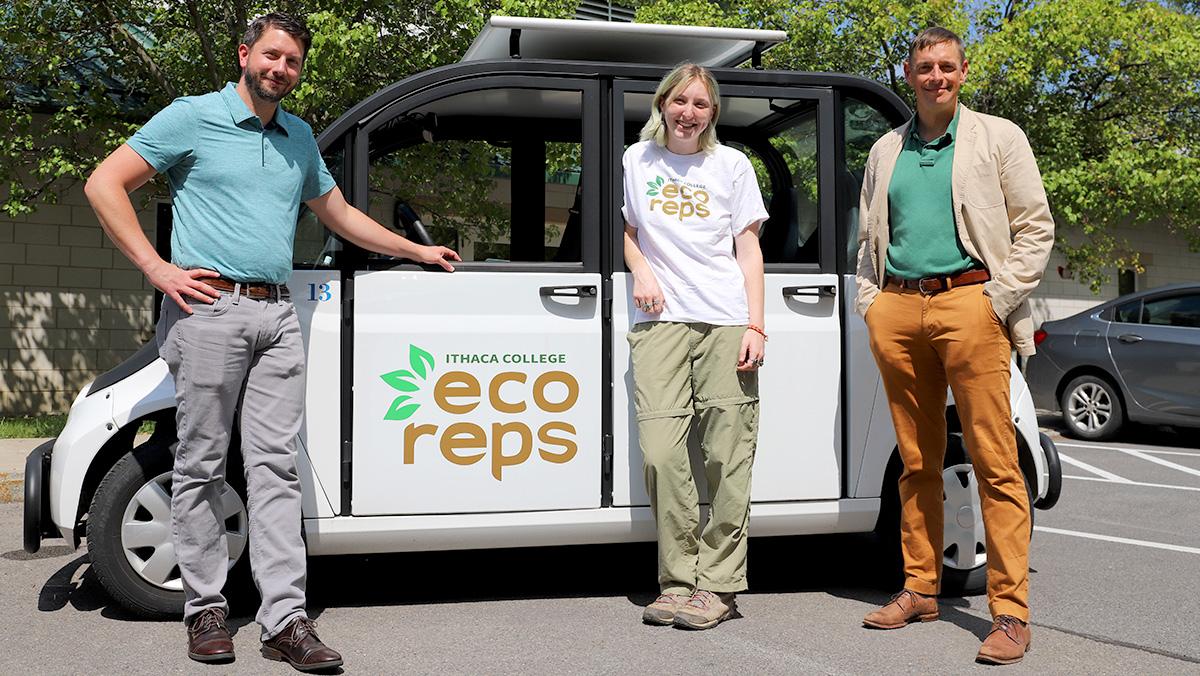 Aidan Charde/The Ithacan
From left to right, David Harker, director of the Center for Civic Engagement, senior Kelly Warren and Scott Doyle, director for the Office of Energy Management and Sustainability, plan to increase Eco-Reps' involvement with the campus and broader Ithaca community in 2022.
By Noa Ran-Ressler — Staff Writer
Published: August 31, 2022

Ithaca College Eco-Reps has been a campus program for decades, according to The Ithacan, but in recent years, the program was forced to scale back on projects and events, as reduced funding and staff cutbacks, noticed by students, left the program without staff to advocate for the students.

Eco-Reps is a team of students led by the Center for Civic Engagement —  formerly led by the Office of Energy Management and Sustainability (OEMS) — to promote sustainability on campus through programs, events and campus-wide communication, including installments in campus restrooms. The team of paid Eco-Reps — a group of project coordinators led by a program manager — makes up only a small portion of a much larger group of volunteers.

Eco-Reps was run by Gregory Lischke, the former director for Energy Management and Sustainability, until he stepped down in November 2021. This followed the removal of Rebecca Evans’s role as campus sustainability coordinator, leaving significant gaps in administrative leadership for the organization, according to senior Katharine Downey, the former program manager from Fall 2021.

This forced many of the responsibilities onto student leadership, according to Downey. She said she had to take on Evans’s role while the club went through a transitional period. As a student athlete on the women’s track and field team, she said picking up the work of Evans’s full-time job was too much to put on one student.

Senior Kelly Warren, the current program manager, echoed many of the issues that Downey faced. As one of several project coordinators in Fall 2021 and Spring 2022, Warren said the change in leadership created some uncertainties for the club.

“We were kind of left in the dark for a little bit,” Warren said. “We were having issues with our budget, so we couldn’t really hold a lot of events like we would normally like to, to get students engaged.”

To address staffing changes and leadership instability, the Eco-Reps program was moved from being under the jurisdiction of OEMS to being managed by the Center for Civic Engagement in Spring 2022. The club is now under the direction of David Harker, the director of the Center for Civic Engagement. Harker said his goal is to support the club as it rebuilds in the coming semesters.

“As we’re stabilized quite a bit, as we’re able to be a lot more proactive than reactive, … my goal as an adviser is to empower the students and to be an advocate for Eco-Reps,” Harker said.

Harker said he plans to reestablish the club as a campus partner, as its presence has diminished on campus in recent years. According to Warren, there have been fewer events and participants in the program. Once the campus has been strengthened as a partner, the program can extend into the Ithaca community, according to Harker.

Specifically, Harker said he plans on working with individual community organizations, adapting to the interests of the group’s members. The ReUse Center, for example, partnered with the college for a pre-orientation program in Fall 2022, according to Harker, and he said he hopes to extend that partnership to Eco-Reps. Harker said the City of Ithaca’s Green New Deal is another opportunity for club members to get involved with the community from a policy perspective.

Scott Doyle, the new director of OEMS, hopes to see more collaboration beyond the campus and with the Ithaca community. Similar to Harker’s goals for the program, Doyle said he sees potential for the club to broaden its influence beyond South Hill.

“There’s efforts that absolutely connect to the community,” Doyle said. “There’s a lot of meaningful pieces that students — while here just for a short time — have really meaningful impacts on those that come after them, but also the community.”

Harker said facilitating partnerships would be his responsibility, in collaboration with other campus leadership like Doyle, but the students are responsible for spearheading these efforts and maintaining them.

With leadership restored, Warren said she plans on expanding current programs like composting and Take It Or Leave It (TIOLI) in the coming semesters to bring more attention to the Eco-Reps’ efforts on campus. This involves expanding the Circle Apartments composting program throughout campus and bringing more students into TIOLI,  the on-campus thrift store in the Clarke Hall basement, according to Warren.

Warren said part of recruitment will involve getting more students involved in Eco-Rep activities. Last year, Eco-Reps led a trash pick-up event. This year, Warren said she plans to host similar projects for campus and community members to get involved with the organization.

There are plans to increase awareness outside of events, even adding a social media coordinator role to create infographics and increase the club’s online presence, according to Warren. Installments in bathroom stalls around campus — highlighting everyday activities that harm and help our planet — have brought awareness to the club in the past, Warren said, but the project needs to be revived.

The biggest issue that Warren and Downey agreed on — after budget issues could be resolved — was a lack of volunteers. With new efforts planned on being made to recruit new members, Warren hopes involvement and commitment will increase.

“The more people the better,” Warren said. “Sustainability is a great thing and Eco-Reps is a great way to teach yourself.”

Doyle suggested that the club diversify its membership, expanding into disciplines that are less associated with sustainability than the environmental studies fields.

“The reality is, for something as significant as issues related to climate change, we really need a variety of different approaches and perspectives to help make meaningful change,” Doyle said.