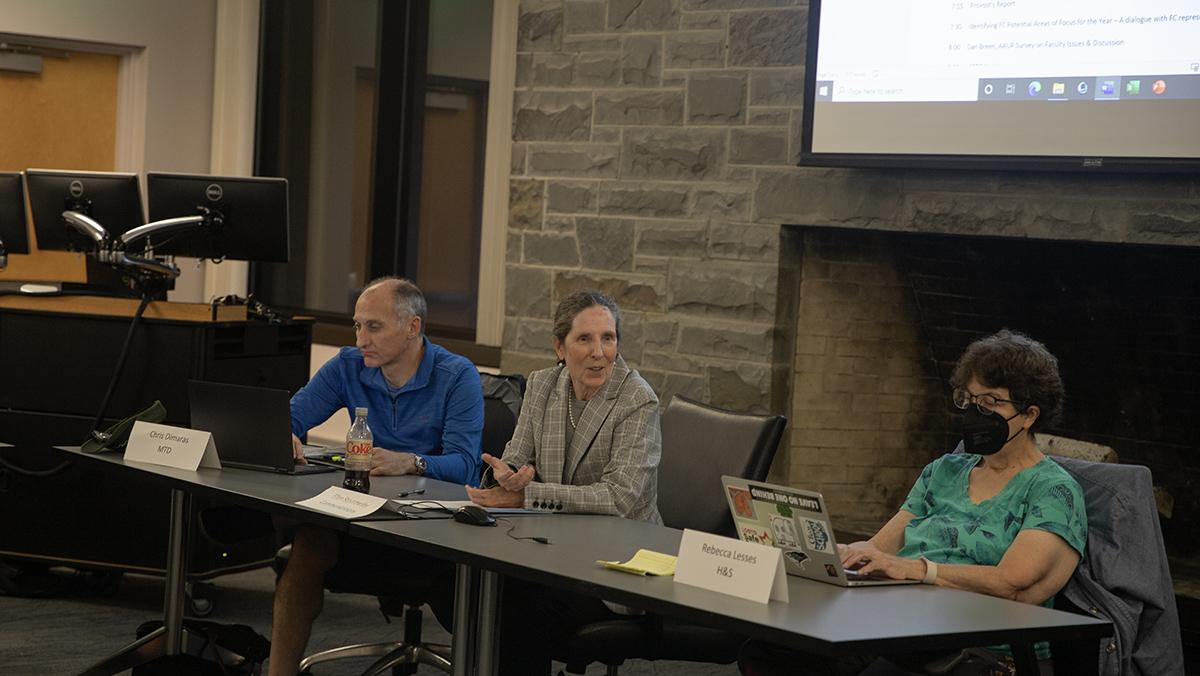 At the Nov. 15 Ithaca College Faculty Council meeting, the college’s Office of Admission announced that it is using social media data to place targeted advertisements for the college. In addition, the council also discussed ongoing scheduling grid changes.

Nicole Eversley Bradwell, executive director of the Office of Admission, spoke to the council about the Student Recruitment Pathway, which shows how a student goes through the process of choosing the college. The pathway begins when a student discovers the college and ends when the student officially commits.

“This is how we build our strategy and engagement — around these points of discovery,” Eversley Bradwell said. “We’re using this … to meet students where they are. Students are in all different phases of their search at different times in their high school career.”

“The strategy behind paid advertising is using the resources we have to hit markets that we are known in and to go deeper,” Marchese said.

Marchese said the college has paid for ads that appear when a high school student in a given area Google searches “best colleges.” Marchese also said the college is using data to change the college’s website relative to the interests of the people that visit the website, which helps personalize their experience.

“If they visit our site, they get an overlay of open house visits, [and how to] apply for the next open house,” Marchese said. “Then we can track [their data].”

In addition to using data, the college has also hired a recruiter for the Washington, D.C., metro area and is considering hiring recruiters for Pennsylvania and New Jersey. These areas are where many of the college’s students come from. Eversley Bradwell said this strategy creates early connections between high schools and the college community that then increases yield.

“If we’re not in those regions, that makes it a little more difficult,” Eversley Bradwell said. “We’re continuing to develop those relationships. … We’re focusing and building territory management.”

After the presentation from the Office of Admission, Melanie Stein, provost and senior vice president, then led a discussion on changes to the college’s scheduling grid. Stein said for many years, departments had trouble accommodating four-credit classes into schedules.

Stein said that before the pandemic, the college had been working on revising the grid schedule, but the changes were delayed because of the pandemic. Stein said those planning the schedule currently do not have the necessary data they need to figure out the best way forward with the grid schedule. So, for the next semester, the college is continuing with its current scheduling grid.

“This is something that’s been long overdue,” Stein said. “I feel confident that with the data that we’ll collect next year, that by this time next year, we’ll be in a much better place.”

The council discussed proposals to create a committee to help resolve scheduling grid issues. However, many argued that cooperation between the senate chairs of respective schools would be the best way to proceed with the issue.

Jonathan Ablard, professor in the Department of History, said faculty were not represented during the development of the recently proposed scheduling grid.

“Many of us felt that faculty had been bypassed,” Ablard said. “I’m sure there are better solutions than a committee, but on the other hand, the committee could be the clearinghouse for information from chairs of all the departments.”

Stein pushed back what Ablard said, arguing that there was a committee for the scheduling grid purpose. Stein said the quality of the input and the amount of feedback that was received was not substantial.

“I don’t think it’s really accurate to say that there wasn’t faculty participation,” Stein said. “There was, you know, this committee that met for an entire semester.”

Tom Pfaff, professor and chair in the Department of Mathematics, responded by saying there was little communication during the grid proposal between the chairs and the schedule that was received was the result of last–minute decisions. Pfaff also showed the council a proposed grid schedule, which he said would minimize inter-class conflicts.

“There really was very little back and forth,” Pfaff said. “This is something that requires lots of back and forth. It’s my understanding that the final grid that was put forward in October was not even one of the ones that committee had on the table, but some combination of those. So there was some sort of really kind of last–minute decision making that cut most of the committee out of the decision making.”