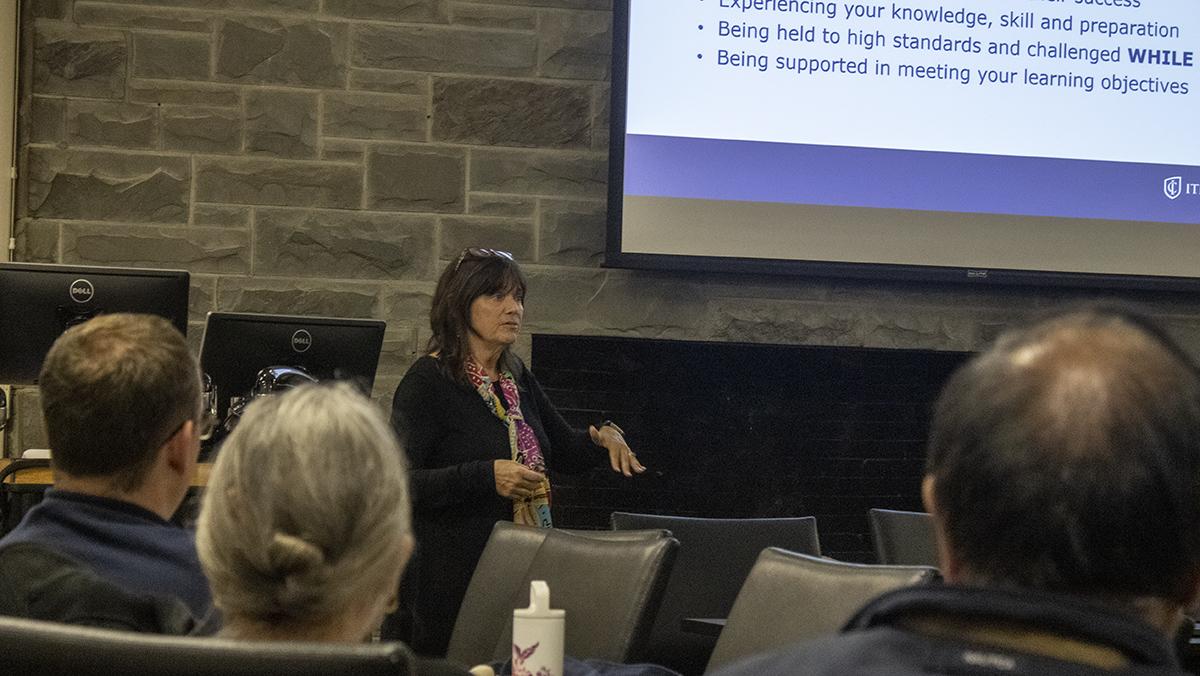 A mixture of positive and negative emotions were expressed at the Oct. 11 Ithaca College Faculty Council meeting where several substantial changes relevant to students and faculty were announced and discussed.

Criticisms were raised at a proposed change to the structure of the college’s class schedules for Fall 2023, which was announced at the beginning of the semester. However, the council praised the administration’s announcement of a new ombudsperson for administration-faculty relations. The council also expressed relief at the college’s decision to partially roll back a plan that would have weakened faculty benefits.

The meeting began with the council formulating a statement in response to the discovery of a swastika scratched onto the door of the college’s Kosher Kitchen, which is being investigated as a possible hate crime. The college said in its email announcement that the swastika had been there since August 2021. On Oct. 12 — one day after the Faculty Council meeting — another swastika was discovered in the Baker Walkway elevator on campus.

Teresa Moore, professor in the Department of Mathematics, asked why it had taken so long for the swastika to be reported to the Office of Public Safety.

“They said that this [swastika] existed since August of 2021,” Moore said. “Is there an investigation going on into why it wasn’t reported sooner? It’s bringing so much pain with so many people. I just don’t understand why this existed for so long without being worth it [to report].”

Ellen Staurowsky, chair of the council and professor in the Department of Media Arts, Sciences and Studies, said she had contacted the Office of Public Safety to try to find out why the swastika had not been reported earlier. Staurowsky said an investigation by public safety is underway.

Aside from the statement, the council did not lay out long-term plans to address antisemitism as a body going forward, however the college held a campus-wide gathering Oct. 12 following the most recent swastika.

During the pandemic, the retention rates at two and four year colleges dropped significantly. At the college, the size of the student body fell dramatically, from 6,266 students in Fall 2019 to 5,239 students in Fall 2021. In addition to trying to increase the number of new students, the college has also put up a concerted effort to improve its retention rates, primarily by encouraging faculty and departments to strengthen their relationships with students.

Bleicher announced a slew of new initiatives in order to increase student retention. These include an enhanced academic concerns system, a student success dashboard and new exit surveys for when students leave the college. Bleicher pointed out that most students who leave the college after their first year are not underperforming, but have a 3.5–4.0 GPA.

“We are looking big picture to try and solve problems systematically as opposed to barriers for individual students,” Bleicher said. “We are really trying to research solutions to the larger problems. Our goal is student success, the outcome is retention.”

Provost Melanie Stein announced that the college will be hiring a new ombudsperson in order to improve relations between the faculty and the administration. An ombudsperson is usually a person responsible for investigating and resolving complaints in a corporate or non-profit setting.

The previous ombudsperson for the college was Sue-Je Gage, associate professor in the Department of Anthropology, who died in May 2020. Stein said this left the community in a difficult place. However, the need for an ombudsperson remained. Stein announced that she has created a draft surrounding what the role of a new ombudsperson would be.

In the beginning of the Fall 2022 semester, the administration unveiled a proposed new structure for the Fall 2023 schedule, which faculty members criticized at the meeting. The provisional structure would try to accommodate a new four-credit model that many of the college’s departments have adopted.

Many members said the current schedule for the college works well for them, so making changes to the schedule is unnecessary.

Jonathan Ablard, professor in the Department of History, expressed frustration with the proposed schedule changes.

“​​I’ve spoken to people in a bunch of different departments in [School of Humanities and Sciences] and I’ll just say that people are spending a lot of time trying to figure it all out,” Ablard said. “It seems like a big waste of time.”

Since the beginning of the Spring 2022 semester, faculty at the college have voiced criticisms of a proposed change to their benefits. This includes a change to their prescription drugs benefit and out of network health expenses no longer being reimbursed.

At the meeting, Stein announced that the changes to the benefits would be rolled back until January 2023, giving the faculty more time. Stein also discussed the role of the Faculty and Staff Benefits Committee, which oversees current benefits and proposed benefit changes.