IC presidential search finalists will no longer be public 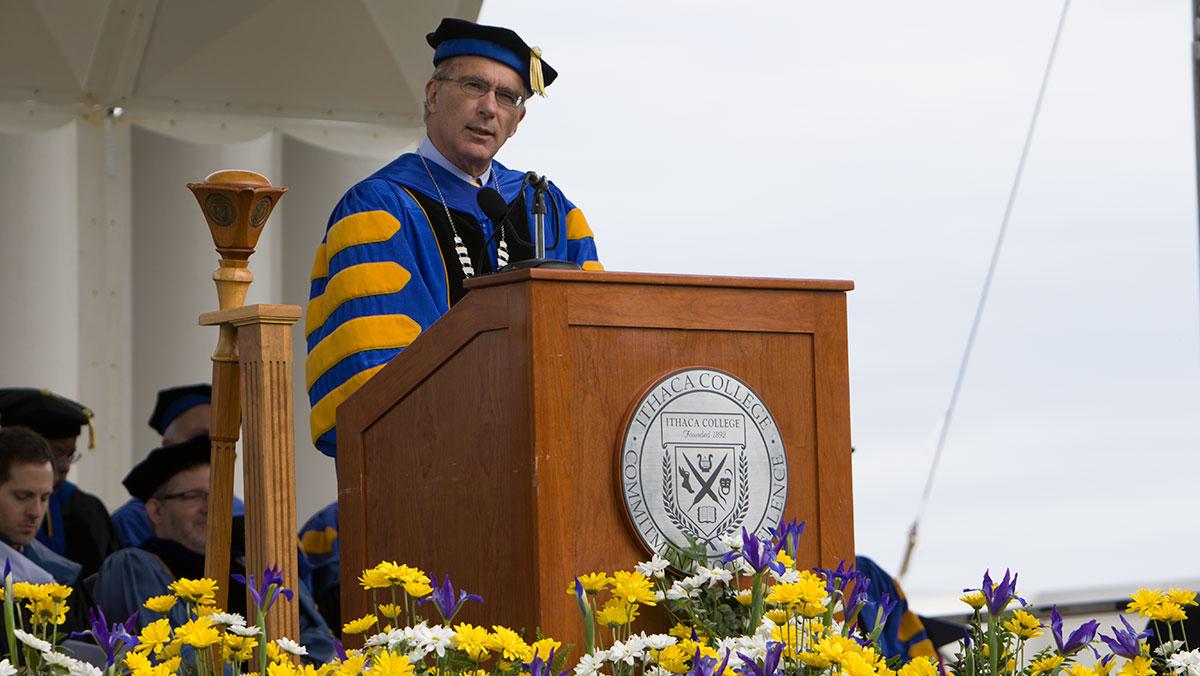 Samantha Fuller/The Ithacan
Pictured above, Tom Rochon, president of Ithaca College, will be stepping down from his position Spring 2017. However, after initial promises that the Board of Trustees would have picked a president by Fall 2016, the search has been moved back and the president will be announced in the Spring.
By Grace Elletson — Assistant News Editor
Published: December 2, 2016

The Ithaca College Presidential Search Committee has announced it will no longer be bringing final candidates to campus for public meetings. Instead, the committee will name the college’s ninth president in the spring.

In an email sent out to the campus community late Dec. 2, James Nolan ’77, chair of the committee, stated in an email the decision to make the process confidential was made based on feedback from the candidates and the search firm. The original plan, as announced by the committee in August, was to bring finalists to campus in the fall.

“We understand that some people on campus will disagree with this decision,” Nolan stated in the email. “The committee did not make this decision lightly and worked throughout the summer and fall in an  attempt to stay true to our original goal of hosting public interactions with candidates.”

The Student Government Association in May published an open letter urging the search committee to employ an open search after many groups on campus had expressed their dissatisfaction with the administration’s leadership. This followed campus protests criticizing the college’s stance on diversity, which lead to the early resignation of President Tom Rochon. A group of faculty members also published an open letter through The Ithacan to ask the search committee for more transparency on when details about the final candidates would be released to the public.

Nolan stated the reason for the change is that many finalists are involved in other searches at different institutions and they are aware that the public knowledge that they are looking for another job could affect their current career.

“The decision to move to a more confidential process does not mean that candidates do not understand or respect the concerns of our community; simply, it is based on reasonable, professional considerations reflected in the higher education marketplace,” Nolan stated.

The search committee will now be responsible for identifying finalists, and the Ithaca College Board of Trustees will make the final decision on who will be chosen for the position, Nolan said. The search committee will hold a public forum from 4 p.m. to 5 p.m. Dec. 6 in Clark Lounge in the Campus Center to answer questions about the process of the search.