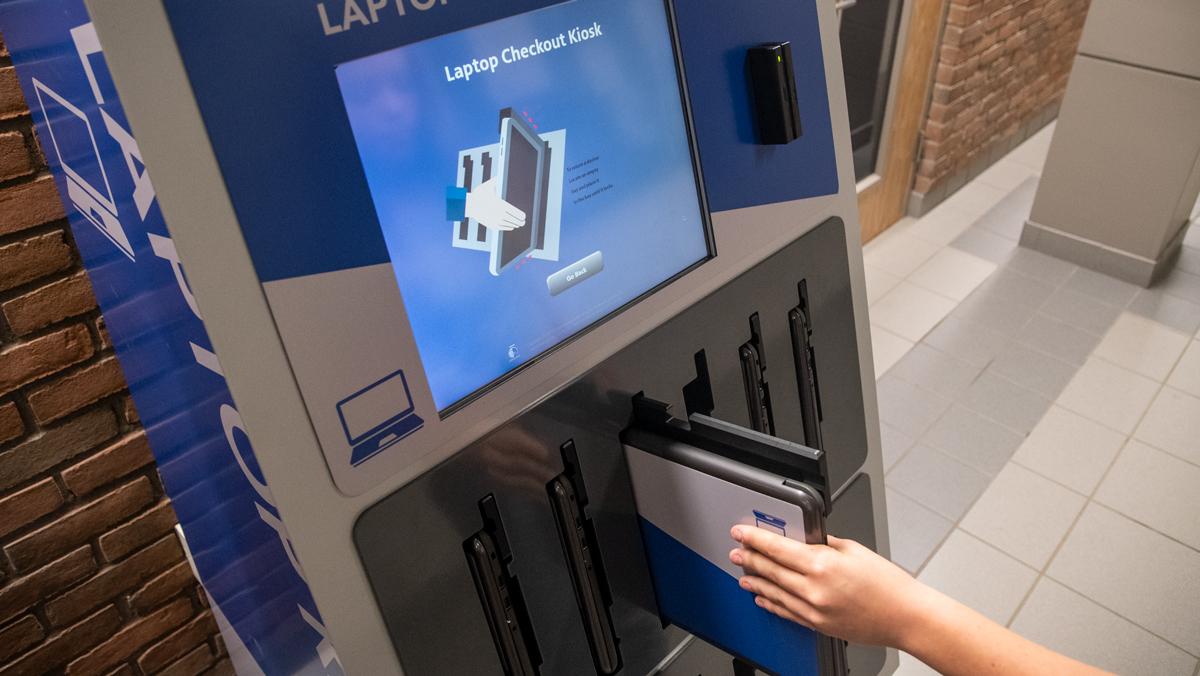 Kristen Harrison/The Ithacan
Students can check laptops out with their student ID from the kiosk, which is located in Friends Hall outside Room 110C.
By Sam Haut — Senior Writer
Published: September 25, 2019

In Fall 2019, Ithaca College installed a laptop kiosk on the first floor of Friends Hall to give students without laptops access to the resource.

The kiosk currently has 12 Windows laptops that students can check out for up to four hours using their student identification cards. David Weil, associate vice president of Information Technology, said the kiosk is run through IT and is placed in Friends Hall because many students have classes there and because it is close to the IT offices.

Weil said that in the first two weeks of classes, the laptops have been checked out over 60 times and that he is happy with the number of people that have checked out laptops so far.

“It’s been extremely well received,” Weil said. “I think it’s pretty good, considering not everybody knows about it and people are still getting used to it.”

Terry Ruger, associate director of engagement and client technologies for IT, said he was also surprised at the number of people that used the program considering the lack of advertising the office used. Weil said they plan on doing more advertising later in the semester. The kiosk was placed in Friends on Aug. 27, and the department sent out an announcement on Intercom that day.

“No, I really didn’t [expect 60 laptops being loaned] because we put out the announcement on Intercom, and how many people pay attention to Intercom?” Ruger said. “In my mind, if we’ve checked out 60 laptops over that short period of time, I think that the numbers will continue to increase as time goes on.”

Ruger said he discovered the idea at an EduCause conference, a nonprofit that showcases technology that can help the higher education IT community, in 2017. Ruger saw a kiosk on display there and since then talked to other schools that had the same program to find out how the college could implement a similar program.

Ruger said that IT can add different kinds of devices into the kiosk, like portable chargers, but that it started with $500 Windows computers because it was cheaper than Macbooks. Weil said the money for the laptops came from the budget for IT.

Ruger said the IT staff will wait until later in the semester to decide if it should add more kiosks or more devices, like MacBooks or iPads, based on the success of the first kiosk.

Weil said the IT staff plans on surveying those that rented the laptops, using the student ID that is required to check out a laptop, later in the year to determine what kinds of improvements they can make to the program.

“I would say we’ll do a preliminary assessment of the kiosk as we plan next year’s budget [in October] to see if demand looks initially like, wow, there’s really a need,” Weil said. “We’ll do an initial assessment there and probably do a more formal follow up … sometime later in the semester once people get to know about this.”

Weil said there is also a separate program for students to take out laptops for longer periods of time that is being done through each of the five schools at the college. Laptops are distributed from IT through the dean’s offices of every school. Weil said IT was gifted 18 laptops from one of its vendors and uses them, along with other computers that IT has, to lend to students.

Weil said the kiosk can help students who would not normally have access to a laptop because of the cost and can help them with school work.

“What I really like about it is it really ties into this whole thing of trying to improve services for students, especially students who may have either a financial need or just a need for something so that it improves their opportunity to study and succeed here at the college,” Weil said.

Senior Margaret Mowrer said using the kiosk has been useful in cases where she has not wanted to bring her laptop to class.

“It’s nice because I live off campus, so sometimes I just don’t want to bring my computer because it is heavy in my backpack and I walk here,” Mowrer said. “So it’s less weight, and it’s really convenient because I have most of my classes in Friends, so I can just check one out, go to class, then check it back in when I’m done.”

Mowrer said she has had difficulty with her laptop before the kiosk was installed and she wishes she could have used it then.

“Last year, I’ve had my computer break twice,” Mowrer said. “Both of those times I didn’t have my computer for a whole week, and it was super inconvenient because I take notes on my computer, so I really wish that it had existed when it happened.”

David Weil, director of engagement and implementation for Digital Instruction and Information Services, has been named interim associate vice president of DIIS and chief information officer at Ithaca College.