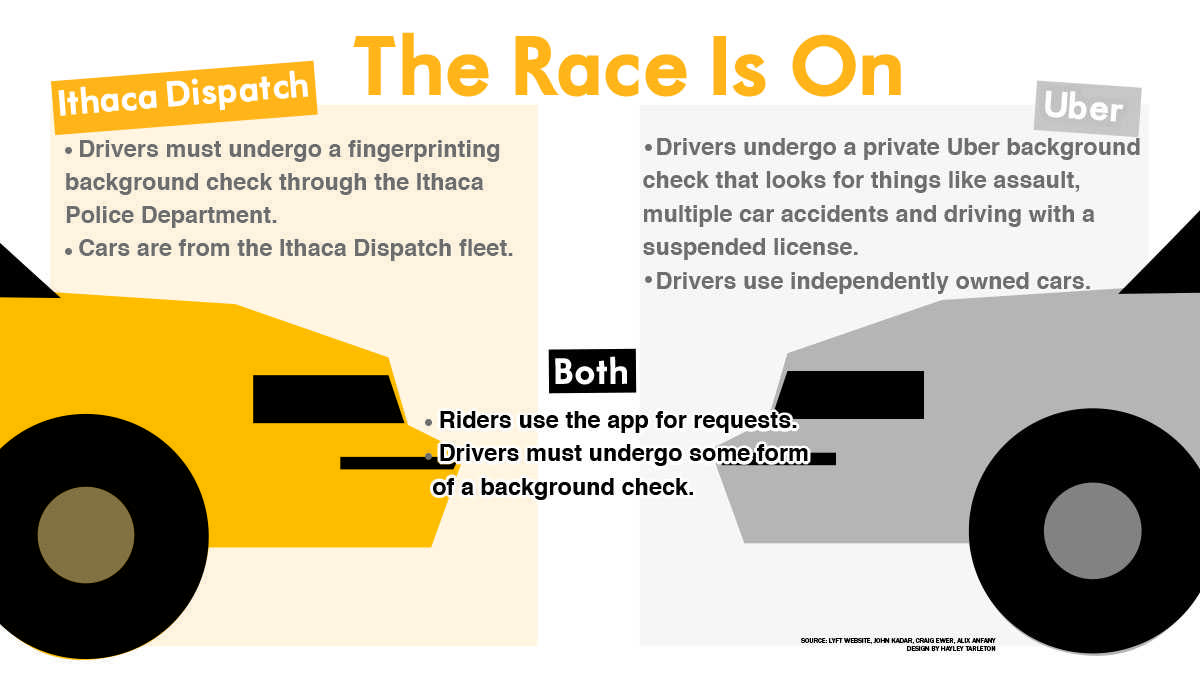 Hayley Tarleton/The Ithacan
Ithaca Dispatch and other local cab companies show little worry about the likely arrival of Uber and Lyft because of preparations they have made.
By Falyn Stempler — Staff Writer
Published: February 1, 2017

Some Ithaca taxi services express little worry at the prospect of potential legislation that would allow ride-hailing services like Uber and Lyft to operate in upstate New York, which has previously been restricted because of New York state insurance law.

Senate Bill No. S04108 was passed in June 2016, and Assembly Bill No. A08195 is still pending. Both bills must pass in order for Uber and Lyft to operate in upstate New York.

John Kadar, president and co-owner of Ithaca Dispatch, which owns University Taxi and Cayuga Taxi, said he is not worried about the potential arrival of Uber and Lyft because of pre-emptive measures his company has taken, such as developing the RedRoute app and enlarging cab sizes. RedRoute is social media app made by a Cornell student in collaboration with Ithaca Dispatch that allows the Ithaca Dispatch office to see the exact location of a customer, similar to the Uber app.

RedRoute has helped improve Ithaca Dispatch’s services, Kadar said. Despite this, some Ithaca College students said they are unaware of it.

“This is the first time I am hearing about it,” freshman Johnny Wikiera said.

Abraham Mulugetta, Dana professor in the Department of Finance and International Business, said that without proper preparation, Ithaca taxis will struggle to compete with Uber and Lyft, businesses with convenient, app-centered services.

“Uber will take over,” Mulugetta said.

He said prices could change to the detriment of Ithaca taxis as they have to compete for service.

Bill No. S04108 has no mention of requiring Uber drivers to conduct fingerprinting or background checks, but Uber’s company policy requires all driver applicants to undergo background checks. Kadar said he finds it problematic that Uber is not required to fingerprint it’s drivers.

He said all drivers of Ithaca taxi services are required to undergo a fingerprinting process, and therefore, a worldwide company should not have a problem to follow suit.

“Certainly a billion-dollar company can do a $63 background check if my small company can,” Kadar said.

Uber spokesperson Alix Anfang said Uber does not like the fingerprinting process, which searches through the FBI database, because it prevents people who may have been arrested but never convicted from getting a job, which would disproportionately affect minority communities.

“It is a new low for the taxi industry to shamelessly mislead New Yorkers as their voices demanding better transportation options in their communities continue to get louder and louder,” Anfang said.

Uber does its background check through Checkr, a popular background screening source for global enterprises and startups, as an alternative to the fingerprint background check. It checks for criminal sexual contact, assault, possession of a controlled substance, domestic battery, sale of alcohol to a minor, driving with fictitious plates, driving with a suspended license, excessive moving violations and multiple car crashes, Anfang said.

Uber spokesperson Craig Ewer said Uber New Jersey has been able to catch criminals through their private background check that were not caught through the fingerprinting check, which is how New Jersey commercial cab companies authorize drivers.

He said a new study based on an audit done with internal Uber data found that 62 drivers who were fingerprinted and licensed by the state of New Jersey failed Uber’s private background check. These drivers make up approximately 8 percent of all commercial and limo drivers in New Jersey who applied to be Uber drivers and passed the state fingerprinting check.

Lyft spokesperson Adrian Durbin said she is pleased that Gov. Andrew Cuomo is pushing for this legislation.

“Having Lyft will improve their quality of life, earn them more money and keep New York state competitive,” Durbin said.

Lyft uses a third party to check every applicant’s driving record through the DMV and also does criminal background checks, according to the Lyft website.

There are online petitions on Change.org to get Uber in upstate New York, and there is an online campaign through Uber urging people to call their legislators, along with other lobbying efforts.

Many students said they would use ride-hailing services such as Uber and Lyft before Ithaca taxi services because of repeated bad experiences.

“Given my experiences with Ithaca cab services, I think it would be good for those services to come to Ithaca,” Wikiera said.

He said these bad experiences include cabs being stolen by other students, having uncomfortable conversations with phone operators and waiting for a long time in the cold, especially during the weekends. Other students said they had similar experiences.

A main reason cabs are stolen is Ithaca taxi services do not usually take the name of the person calling, freshman Jack Gaffney said.

“People can steal cabs whereas with Uber, they have your name and size of your party,” Gaffney said.

Freshman Ali Curcio said she would also use Uber before Ithaca taxi services due to the technological benefits provided by Uber.

“Uber is better just because the likelihood of it not showing up or being stolen is so slim,” Curcio said.

Tompkins Consolidated Area Transit could soon lose $200,000 of federal funding per year, based on a bill recently passed by the U.S.