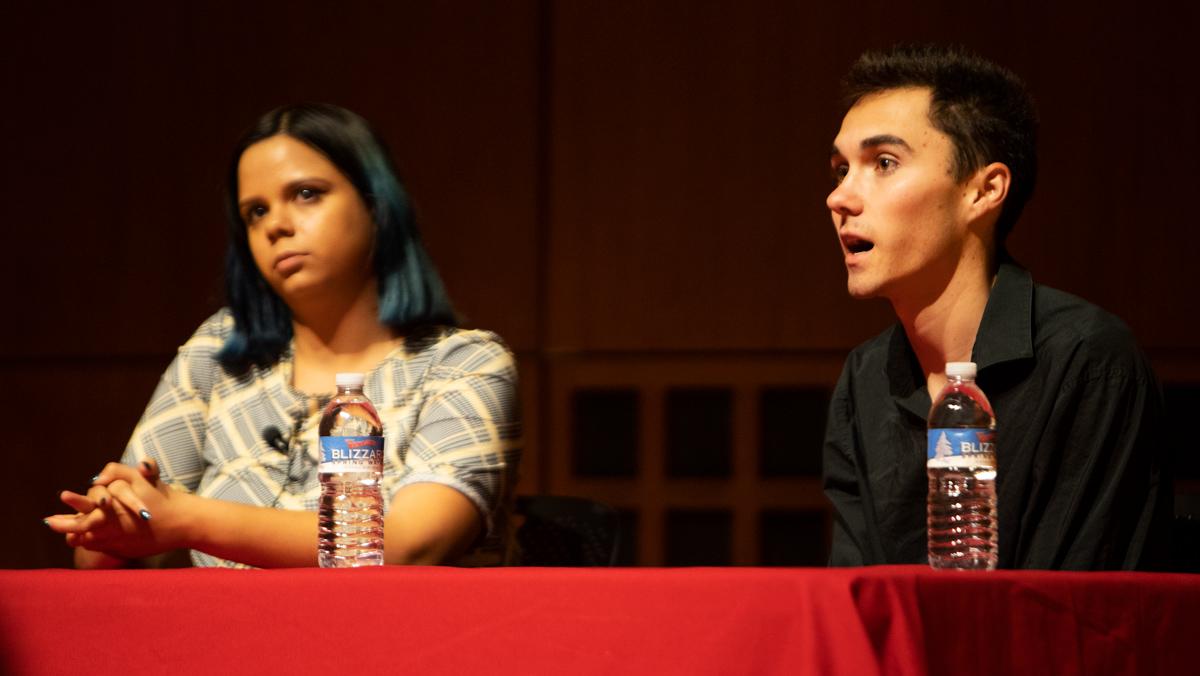 Reed Freeman/The Ithacan
From left, student activists Samantha Fuentes and David Hogg speak on the importance of engaging young adults in voting Sept. 29 at Cornell University's Kennedy Hall. Student voting rates doubled from 2014 to 2018, according to a report released by the Tufts University Institute for Democracy and Higher Education with the National Study of Learning, Voting and Engagement (NSLVE).
By Olivia King — Staff Writer
Published: October 3, 2019

Voting among college students has surged over the past four years. In order to gear up for the election season, efforts are being made at the local and national levels to continue the momentum of student voter registration and civic engagement.

Student voting rates doubled from 2014 to 2018, according to a report released by the Tufts University Institute for Democracy and Higher Education with the National Study of Learning, Voting and Engagement (NSLVE). The national student voting rate raised approximately 21 percentage points, now reaching around 40%. The average turnout for a private four-year institution in the NSLVE grew from 18.2% to 39.4%, according to the study.

Sarah Mitchell, Virginia state coordinator for the Campus Vote Project, said the surge in student voting may be due to students wanting to play active roles in issues that matter to them, from health care to climate change.

“I think the biggest thing in the work we do is finding areas in campus life that touch every student,” she said.

Mitchell said another component might be that, in the past, colleges have shied away from playing active roles in student voting to not come across as partisan. She said that now, schools are taking on more  active roles and promoting civic engagement on campuses.

David Harker, director of the Center for Civic Engagement, said there have been scattered efforts on the college’s part to encourage student voting. He said that last year for the midterm elections, the college tried to coordinate voting efforts by offering free shuttles to polling locations and by working with The Andrew Goodman Foundation.

The college has student political organizations, like the IC Democrats and the IC Republicans. Sophomore Hunter Simmons, president of IC Democrats, said the organization currently only has an executive board of six people as it is undergoing changes. He said IC Democrats aims to emphasize voter registration and to have discussions to encourage student involvement.

Simmons said that outside of the Department of Politics, there is not a lot of political engagement on campus.

Senior Elaina White, president of IC Republicans, said students on campus do not participate in politics as much as they should. However, she said, she can understand why more conservative students would be hesitant to get involved in politics. She said there are approximately 30 students in IC Republicans.

“[The club has] given them more courage, I think, to speak up because there are people in our meetings who say they don’t even feel comfortable talking about politics on campus,” she said.

Sophomore Sebastian Chavez is a member of Political Ambassadors, an organization for politics majors or minors that promotes political discussions on campus so students can have voices in the political world. He said the organization has 15 members.

“Coming from a person of color’s perspective, when it comes to politics, politics is survival,” Chavez said. “It’s very serious. … A lot of people don’t understand or realize that politics is an opportunity for anyone.”

Chavez said it is important for students to get involved in politics no matter their party affiliations.

“This is our future, no one else’s,” Chavez said. “This is a game-changing moment for our generation to think about what we want for our lives and for our children’s lives. It’s time for students to take initiative. … It’s the key to making this place better for them and their children.”

Initiatives to further promote student voting at the regional level have also been held. The Andrew Goodman Vote Everywhere Regional Coalition Summit took place Sept. 28 at Cornell University. The summit aimed to develop a framework for a regional coalition that will act as a team to increase the number of college students who are voting. The Andrew Goodman Foundation was created to honor Andrew Goodman, a civil rights movement activist who was murdered by members of the Ku Klux Klan. Approximately 40 people attended the seminar, and approximately 150 people attended the event featuring March for Our Lives cofounders David Hogg and Samantha Fuentes.

Representatives from Cornell University, Hobart and William Smith Colleges, Wells College, Colgate University, Corning Community College, University of Rochester, Binghamton University and St. Lawrence University gave brief presentations on what their schools are doing to promote student registration and voting. Many schools talked about using TurboVote, a tool from Democracy Works that acts as an application to make voting easier by sending reminders about important dates, tabling and providing transportation to voting locations.

Ithaca College was invited, but no representatives or students attended. Harker said the registered attendees could not attend for personal reasons. He said the college could have done a better job at advertising and planning for students to attend the event.

Stephen Dewitt, Tompkins County Board of Elections Democratic commissioner, presented on changes that have been made regarding voting.

Regionally, Governor Cuomo signed a bill Sept. 26 allowing voters to change their party enrollment up to Feb. 14, as opposed to the former Oct. 11 deadline. This allows new voters, as well as people who have moved to new communities, to have more time to choose their party affiliations.

On campus, the Student Governance Council passed a bill in Spring 2019 to provide free postage stamps to students requiring absentee ballots. In 2018, 35% of students voters at the college voted by absentee ballot, compared to 4.2% voting in person on Election Day, according to the NSLVE report.

Following a discussion among the schools at the summit, Hogg and Fuentes talked about their experiences with gun violence and activism.

Hogg emphasized the importance of voting and students’ impacts to create change. He said approximately 70% of March for Our Lives’ efforts focus on getting young people to vote to change legislation regarding gun rights.

Fuentes said the biggest portion of stopping gun violence is education and leadership.

“I feel that change can only really be enacted when we have voices to represent the changes we want,” she said. “I know for a very long time I was a bystander. I was uneducated. I was uninterested. And more than anything, I was numb. That’s not an attitude to have because worst-case scenario, you get shot. And that’s the truth. If you don’t do something, no one else is going to.”

Sophomore Mark Scaglione said it was important for Hogg and Fuentes to speak somewhere they could reach students and encourage them to register to vote. Scaglione said there is a lot of political talk but no action at the college. He said the school could do more with student organizations to encourage student registration and voting because civic engagement is important.

“Civic engagement teaches students to take the initiative,” he said. “They have to get their voices out there in order to be heard.”

Binghamton University senior Sophia Geringswand said she hoped to brainstorm with other schools on how to reach out to student populations that might not typically get involved with politics.

“Emerging young adults are unaware of the power that we have when we turn 18,” she said. “We are able to have our voices heard. We are able to be a part of the system. We are able to make change, and a lot of students don’t realize that ability and don’t utilize it until they’re older and have already been hurt by government.”

Wells College sophomore Rebekah Edwards said that the summit was productive and that she was looking forward to working with other schools.

“We are the future,” she said. “I personally believe this generation is very politically involved already and we’re very passionate people, but to actually get out and vote just takes it one step further to actually make the impact that we see, to have control over our democracy as much as we can and the direction of this country because we will be the ones running it.”