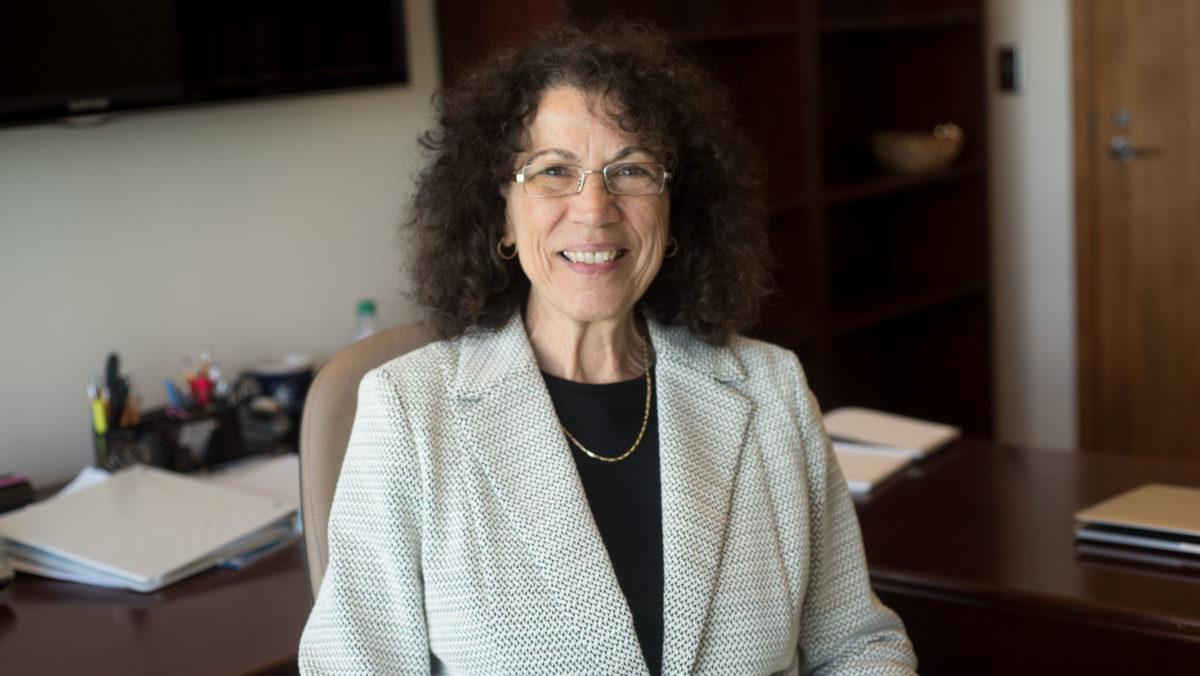 Jade Cardichon/The Ithacan
Linda Petrosino, provost and vice president for educational affairs at Ithaca College, is a member of the reaccreditation executive committee and helps oversee the process of reaccreditation at the college. Committees are currently putting together the first drafts of a report that analyzes how the college is meeting certain standards set by the Middle States Commission on Higher Education.
By Sierra Guardiola — Contributing Writer
Published: September 27, 2016

Ithaca College is taking the first major step toward reaccreditation by putting together the first drafts of a report that analyzes how the college is meeting certain standards set by the Middle States Commission on Higher Education.

Reaccreditation is a process that determines if a college is meeting seven set standards of higher education, which are created by Middle States. These seven standards for evaluation are mission and goals; ethics and integrity; design and delivery of student learning experience; support of the student experience; educational effectiveness and assessment; planning, resource allocation and institutional improvement; and governance, leadership and administration.

Reaccreditation ensures that the college can keep receiving financial aid as well as have the ability to give degrees to students.

The process began last fall, and now, work groups composed of students, staff and faculty are compiling a self-study report — a document that shows how the college is meeting the seven standards. The final version of this document is due in Fall 2017, and a site visit by Middle States and a full review of the finished report will take place in Spring 2018.

The last reaccreditation process took place in June 2008. The Ithacan reported in 2012 that the college was assigned a monitoring report, due in April 2010, to address the lack of an assessment program for student learning and a general education system.

In the Fall 2015 semester, seven working groups were created, one for each of the seven standards assessed. Luke Keller, co-chair of the self-study steering committee and Dana professor in the Department of Physics and Astronomy, then created a self-study design that determined how the college would create the report.

On May 5, Tito Guerrero, Middle States liaison to the college, visited the campus to give feedback on the design to the committee members.

“Ithaca College has a long, positive history with Middle States Commission on Higher Education, and they are very attentive to the issues that need to be addressed,” he said.

“It is a unique opportunity for all members of the campus community to come together as people of goodwill to identify ways in which Ithaca College can be made better, stronger, more vibrant than it already is,” Guerrero said.

Keller said that since last fall, each of the working groups has been collecting documentation and evidence that show the seven standards required by Middle States are being met.

“We now have this huge repository of documentation,” Keller said.

The seven groups are now in the writing phase and are beginning to draft 10- to 15-page reports. Each report will detail how the college is adhering to each standard.

For example, Keller said one standard the college could show is that it has a mission and vision statement. Documentation evidence would then prove that the college meets this standard.

The first drafts of these reports are due by February 2017, according to the original timeline, but Danette Johnson, vice provost for educational affairs, said the groups are ahead of schedule and will have their first drafts done by the end of the fall semester.

Keller said that once these reports are finalized in late spring or early summer, they will be sent to Jaime Warburton, assistant professor in the Department of Writing. She will look over and edit all seven of the working groups’ reports to make the collection easy to read and flow as if one person had written it, Keller said.

According to the original timeline, by Fall 2017 the first draft of the electronic report will be released to the campus community for comments and feedback. The committee will then incorporate this feedback into the final version, which will go to the team of Middle States representatives who will visit in Spring 2018.

Keller said in Spring 2017, the committee will be doing outreach to raise awareness about the process, including talking about it in classes, on Intercom and in meetings.

However, the first awareness event this year will be an informal discussion about the reaccreditation process, taking place Oct. 6. From noon to 1 p.m. in Klingenstein Lounge, the committee will meet with the campus community. Claudine Keenan from Stockton University, an advisor of the self-study steering committee, will be talking about the process. Keenan has been a part of many site visit teams for reaccreditation processes and will try to address issues or concerns that the campus community may have, according to an Intercom announcement.

Linda Petrosino, provost and vice president for educational affairs, is a member of the executive committee and helps oversee the process. She agreed that it is important for the campus to be aware that reaccreditation is taking place.

“It is a responsibility as a campus to be knowledgeable that we are engaged in this process,” she said.

As the reaccreditation process continues, Johnson said, the working groups are making progress that lines up with their projected timeline and have been showing proof of evaluation and adaptation — two things that she believes are important to Middle States.

Petrosino said she sees no issue meeting the deadline for the reaccreditation process.

“We have phenomenal committees in place that … work consistently and regularly, and we are on track and on time to meet our entire timeline,” Petrosino said.