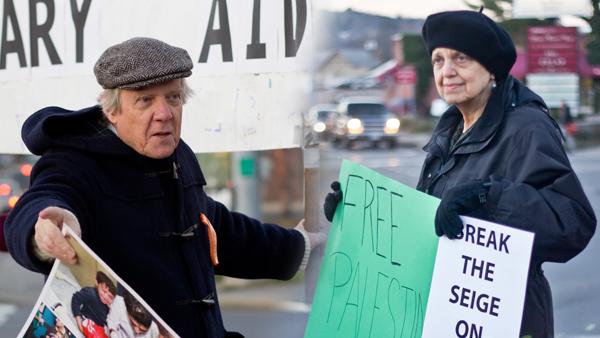 Beth Harris, associate professor of politics, stands in front of her Political Justice class describing the conflict between Israel and Palestine, holding up a packet with maps and articles inside of it. What many students don’t know is that after class Harris would be holding up posters at a Gaza protest on the side of Route 13.

For professors like Harris, protesting is how they do their part to enact change in both the college community and elsewhere. They have chosen to not only weave their passions into their teachings but also to go out and advocate for the issues they believe in.

Harris said she has felt strongly about human rights issues since she was in college and is now focusing her energy on the situation in Palestine and the Gaza Strip.

“At this point, Israelis have a government that can protect them, and the Palestinians don’t,” Harris said. “It’s a big concern of mine. Since 1948 the Palestinians have been in the position of refugees.”

Harris was not the only faculty member to attend the Gaza protest Nov. 16. More than 20 college students, locals and professors participated in a demonstration in Ithaca to oppose U.S. aid to the Israeli military. Fred Wilcox, associate professor of writing, who was also at the protest, said Israel’s weapons used to attack innocent people on the Gaza Strip are paid for by U.S. citizens’ tax dollars.

“The more you know about it, the sadder you’ll get and wish that everybody there would step back from the violence,” Wilcox said.

The history of violence in the Gaza Strip dates back to 1948, when Israelis drove Palestinians from their land. The latest round of hostilities began in November when Israel launched an air campaign against Hamas in retaliation for Hamas rockets fired into Israeli civilian areas. After eight days of escalating hostilities, Palestinian militant groups ordered a cease-fire in the Gaza Strip. On Nov. 29 the U.N. accepted Palestine as a nonmember observer state.

Wilcox said he remembers his own professors who went out and demonstrated with students during the Vietnam War protests and said it was inspiring. However, he also said some academics fear their job security if they are too outspoken, but he believes it is important to act because “talking is cheap.”

“If more professors would come out at Ithaca College, Cornell, the students would follow,” he said. “They’d come out and see the example and say OK, it’s good and you can stand up for what you believe in.”

Patricia Rodriguez, assistant professor in the department of politics, often shares her experiences with students about attending rallies and peaceful protests for issues, including drone warfare and Colombia social movements.

“It’s important to raise awareness about policies that are usually not put out to the people in the correct way or the way that informs them of everything that happens,” Rodriguez said.

Rodriguez, who is Chilean-American, became aware of political issues in Latin America when she was younger because of her family’s struggles under the regime of Augusto Pinochet in Chile. Her activism began after her family was forced into exile from Chile, which caused them to move to Mexico and Brazil.

“I was protesting a lot in Brazil during the time of the transition to democracy,” Rodriguez said. “I just didn’t want to sit in class and be listening to some other history. I wanted to be participating.”

In 2008 and 2009, Rodriguez joined a group of students who drove down to Fort Benning, Ga., to attend a large protest against the School of the Americas, a U.S.-based school designed to train Latin American soldiers for combat against their own people, Rodriguez said.

Some students, like senior Ren Ostry, say they appreciate when professors advocate for their beliefs because it creates a better learning environment, she said.

Ostry is an activist who often sees professors and familiar community faces at events like the anti-fracking ones held over the past summer.

“Participating in actions with my professors and advisers is a really incredible space for me and others to build relationships and really practice what we learn,” Ostry said. “I feel very lucky that the professors … really encourage community participation, hands-on practice and experience and to really seek empowerment from voices and actions.”

Sophomore Nicole Nader, who took the Political Justice course with Harris, said she likes when professors choose to protest because it means they’re going out and doing what they discuss in class.

“I feel like I respect Professor Harris, specifically more after I found out that she protests and stands up for causes,” Nader said. “She’s not just telling us what’s happening, she actually believes in something.”

Rodriguez said while she will encourage students to attend protests that she’s interested in, she also keeps in mind the dangers that come with protesting.

“I want to do more, but you get arrested, and you have to pay fees, and you probably have to go to jail,” Rodriguez said. “So as a scholar and as an activist, I can’t do too much.”

Other professors like Harris and Wilcox have both dealt with the police in some capacity during past protests.

In 1971, Wilcox went to Washington, D.C., to “close down the capital” in an anti-war protest, where he experienced severe police brutality.

“The police attacked us,“ Wilcox said. “They broke arms, legs, heads and they broke my leg and shattered my kneecap to pieces and threatened to kill me.”

Since becoming a professor at the college, he has returned to Washington, D.C., many times to protest U.S. involvement in El Salvador, death squads in Guatemala and others.

“If we think the government is committing war crimes anywhere in the world, we should stand up and say, ‘No, you aren’t doing this in my name,’” Wilcox said.

Involvement is something that rings true for many professors on campus who think that voicing opinions and participating in nonviolent protests can really create change, Wilcox said.

Student organizations on and off campus can find ways to link social injustices in areas that we may have never realized, Rodriguez said. By joining a group working toward policy change, students can build a movement, she said.

“Being integrated in talks in the community, in workshops, getting to know these people, would be an amazing way to be more aware,” Rodriguez said.

Nothing should hold anyone back from standing up for what they believe in, Wilcox said.

“I think a lot of people are waiting for the next Martin Luther King, the next John Kennedy or Malcolm X,” Wilcox said. “But we don’t need to wait for leaders, we just need to take action and do something that we feel strongly about.”