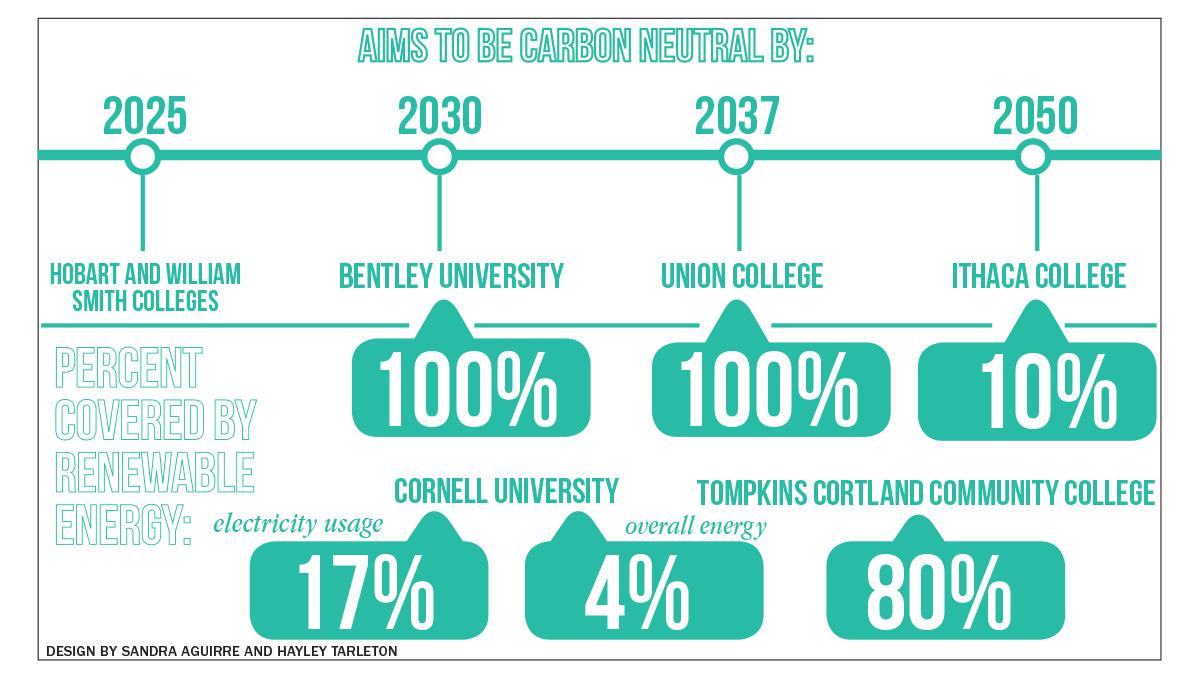 Design by Hayley Tarleton
Some colleges and universities are covering all of their energy needs by renewable sources. Despite the progress made with Ithaca College's recent solar project, when comparing the college’s 10 percent to numerous other colleges' and universities', the college does not measure up.
By Sophie Johnson — Contributing Writer
Published: March 22, 2016

Ithaca College is still behind on using renewable energy compared to other colleges and universities nationally, despite its recent adoption of solar energy to cover 10 percent of the college’s energy needs.

In 2007, then-President Peggy Ryan Williams signed the American College & University Presidents’ Climate Commitment. With the agreement, the college developed the Climate Action Plan, pledging to be carbon neutral by 2050. The college has fallen short on many aspects of the plan.

On Feb. 19, the college announced an off-campus solar electric project in which it would purchase all of the energy produced in a power purchase agreement with Borrego Solar Systems Inc. The solar project is the only form of renewable energy used on campus, aside from a geothermal heating system that solely provides for the Peggy Ryan Williams Center.

Despite the progress made with this solar project, when comparing the college’s 10 percent to numerous other colleges‘ and universities‘, the college does not measure up.

The Environmental Protection Agency released a list of 30 colleges and universities in the U.S. that have the highest green power usage. Among these 30 schools was Union, located in Schenectady, New York,  which covers 100 percent of its energy needs with renewable energy.

According to Meghan Haley-Quigley, sustainability coordinator at Union, the campus has four solar arrays; three vertical–access wind turbines, a turbine with blades arranged vertically that turns via wind to generate power; a solar–thermal hot water system, a system that uses the sun’s energy to heat water; and two geothermal heating and cooling systems, which use the natural heat in the earth to create energy to heat and cool buildings. Although Union has invested a great deal in these on-campus renewable energy sites, this only accounts for less than 1 percent of the total energy consumed by the college, Haley-Quigley said.

Haley-Quigley said that while all forms of renewable energy go into the calculator the same way, some are preferable to others.

“There’s a hierarchy of what’s environmentally preferable,” Haley-Quigley said. “Number one would be on–site production. Number two would be an off–site solar farm via ppa or a lease. Number three would be the purchase of RECs.”

Additionally, Bentley University, located in Waltham, Massachusetts, covers 100 percent of its energy needs with renewable sources. This energy also comes from the purchase of renewable energy certificates from wind–power sites in Texas and Nebraska, said Amanda King, the director of sustainability and special adviser to the president at Bentley. With the purchase of these energy certificates and reductions on campus, King said, Bentley has reduced its carbon net emissions by 50 percent.

Outside the EPA’s list, Quinnipiac University, a member of the New American Colleges and Universities group — a peer group of colleges comparable to Ithaca College — produces green energy on–site, like Ithaca College. Keith Woodward, associate vice president for facilities operations at Quinnipiac, said via email the university began using renewable energy in 2007 and produces 30 million kilowatt hours of renewable energy a year from 721 solar panels and 40 geothermal wells on campus.

Jerone Gagliano, director of energy management and sustainability at Ithaca College, said via email the current goal of the college is to complete a sustainability strategic plan this year. Gagliano said he believes the college is on track to be carbon neutral by 2050, given “strategies and technologies that exist today.”

Paula Turkon, assistant professor of environmental studies and science at Ithaca College, said the solar array project is a great way to begin. Turkon said she believes the college used to be more invested in sustainability, but things are picking up again.

“I think things are ramping up,” Turkon said. “For the first time in a couple of years, I’m much more optimistic.”