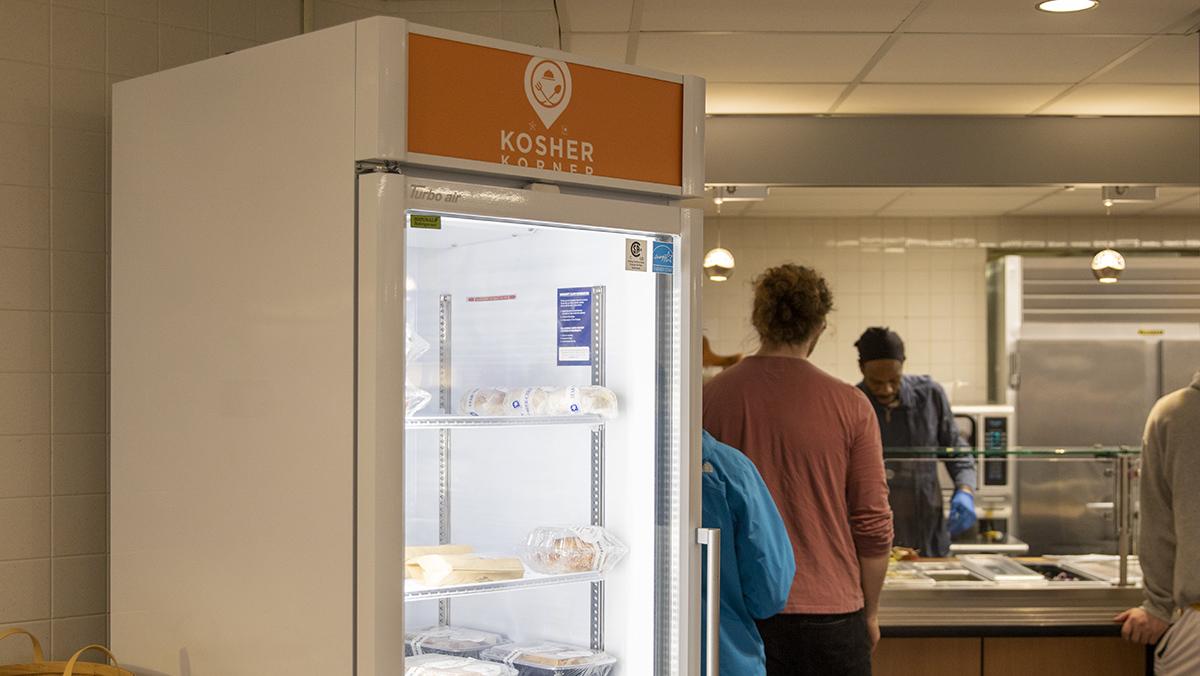 Kalysta Donaghy-Robinson/The Ithacan
Kosher and halal food is made and served out of the kitchen in Terrace Dining Hall. Food from the kitchen is also labeled and put into retail locations and in the fridge in Campus Center Dining Hall.
By Lorien Tyne — Assistant News Editor
Published: April 6, 2022

Muslim students at Ithaca College who practice Islamic law and eat halal now have access to halal-certified food after years of having to make do with whatever campus dining served.

Halal is an Arabic word that translates to “permissible” in Islam. In terms of food, halal is the dietary standard outlined in the Shari’ah, or Islamic law. When a menu item is labeled as halal in a campus dining hall, the dish meets the requirements of Islamic law, meaning it will not contain non-halal meats, balsamic or wine vinegar, gelatin, deep-fried foods or products with traces of alcohol. Having certified halal food on campus has been a multi-year process and a collaborative effort between students, Dining Services and the Office of Religious and Spiritual Life, as well as some exterior organizations like Star K, the college’s kosher provider, and Etimad Halal, which is the agency that certified the Kosher Korner.

The halal certification ensures that the food will be made strictly in one designated kitchen. Everything from the kitchen will be also labeled halal and can be guaranteed that it follows the dietary restrictions associated with Islamic law. Kosher and halal food is made and served out of the kitchen in Terrace Dining Hall. Food from the kitchen is also labeled and put into retail locations and in the fridge in Campus Center Dining Hall.

Senior Kinza Ceesay is the president of the Muslim Student Association (MSA) and had a hand in the final preparations of the halal certification. She said the certification is a milestone for Muslim students on campus.

“We are a small population, but we are getting the representation and accommodations that we need on campus,” Ceesay said. “It just shows how much they care and how much they’re putting in the work to make sure that every single student on campus counts. And that personally meant a lot to me. … Dining took it upon themselves to educate themselves about Muslim students and halal meals … and then eventually they were able to implement it without any type of pressure coming from MSA or Muslim students.”

Samah Choudhury, assistant professor in the Department of Philosophy and Religion, is the new adviser for MSA. She said she commends the students in MSA for making this change happen so that all Muslim students at the college now and in the future will be able to access halal certified food.

“For Muslim students at Ithaca College, this is particularly meaningful because for so long these types of accommodations just weren’t there,” Choudhury said. “Accommodations in general are something I think is harder to ask for if the institution isn’t offering it. People who are already minoritized frequently don’t feel they can ask for things on top of what is already available to them. And so in this case, I think students have had to just kind of make do with what they have.”

As part of the certification and improvements to dining, the college has invested in boneless, skinless, halal-certified chicken that can be found on campus in locations like Terrace Dining Hall, Campus Center Dining Hall, Towers Marketplace, Ithaca Bakery and the Food Court. Certain beef products at the allergen-free stations will also be halal, but all halal food will be identified with signage.

Lauren Goldberg, interim director for the Office of Religious and Spiritual Life, said her predecessor Hierald Osorto was a big part of starting this initiative, but it took years and the COVID-19 pandemic pushed the timeline even more. She said her appointment as interim director meant that she had the enjoyment of watching this improvement come to fruition.

“One of the pillars of the strategic plan that we’re in the middle of implementing is a real focus on diversity, equity and inclusion initiatives,” Goldberg said. “And this is a perfect example of what we would call living into those values through these structural changes and through investments that the campus is making. It’s been very impactful to see that this needle moved in a positive direction for Muslim students.”

Chaim Goldgrab, Star K affiliate for Terrace Dining Hall’s Kosher Korner, said he was hired by Star K to move to Ithaca and revamp the kosher kitchen in Terrace Dining Hall based on international standards for Star K. He said that while there have been some people that eat halal and have been comfortable eating kosher, it was an important change to support different faiths on campus.

“For any of those people, especially the ones that really needed it, it is a feeling that the school is hearing their voice,” Goldgrab said. “With halal, this is a good first step to whatever might come in the future. … I’d like to see kosher get bigger across campus along with halal.”

Goldgrab said the process of adding halal was not very difficult because there was already a separate kitchen for making kosher food and it purchases all its own products that are significant to the kosher and halal community. He said the kitchen took out any recipes where kosher and halal ingredients contradicted each other. While there are some overlaps, kosher follows Jewish law and halal follows Islamic law. Kosher food prohibits some specific food combinations and only certain animal products can be eaten. He also said the Kosher Korner tries to copy the main dining room’s menu as much as possible so everyone is eating something similar.

“I’ve gone to hotels for conferences or I’m on an airline and … the kosher meal is double wrapped, hard to open, a hollow roll with frozen corned beef or frozen salami, while people are eating prime rib and baked potato,” Goldgrab said. “I’m a chef and I’ve also been a caterer. So I’ve always tried to make it similar so that people sitting down together, you know, don’t feel slighted.”

Junior Klarholz Jobe works alongside Ceesay as the vice president of MSA. As an international student and a Muslim student, she said being able to come together as a community — however small in number they may be — and eat halal food together is special.

“It’s very hard to maneuver the whole dietary issues of religious ideology,” Jobe said. “Especially when there’s such a little community, it means a lot for us to be considered and be accommodated. So I would say yes, we’re very happy about it. … Our meals are very intimate things, so being able to celebrate and share with other communities, it’s a really good thing.”