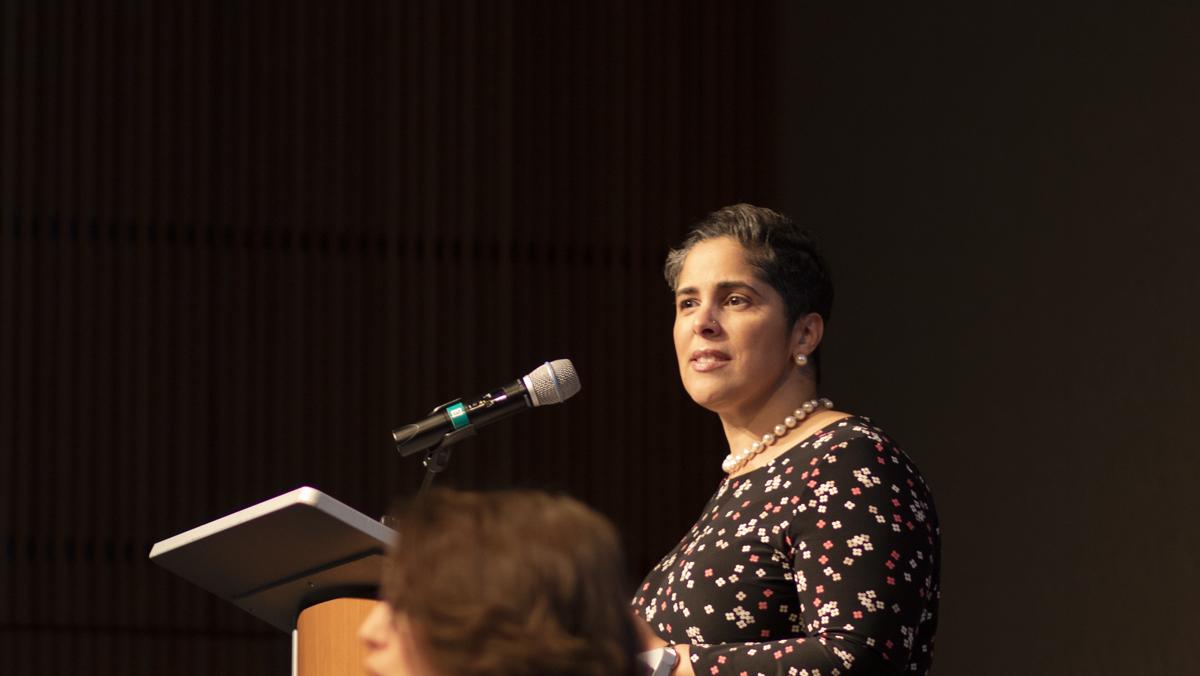 Kristen Harrison/The Ithacan
Ithaca College President Shirley M. Collado speaks at the All-College Gathering held earlier in the semester. Collado said the incoming freshman class will be smaller but the financial health of the college is still strong due to the college's strategic plan.
By Madison Fernandez — News Editor
Published: May 12, 2019

Ithaca College President Shirley M. Collado announced that the budget for the 2019–20 fiscal year will need to be changed to account for the college not meeting its projected enrollment of incoming freshmen for the 2019–20 academic year.

Collado said the college is expecting the incoming freshman class to be approximately 1,450 students in an email sent to faculty and staff May 8. This number comes after the May 1 deadline, which is the deadline for when students can commit to the college. In Fall 2018, the college projected this number would be between 1,619 and 1,630 students. Collado stated in the email that with the lower enrollment of incoming freshmen, there is a projected revenue decrease of $4.6 million.

Collado said in the email that although the incoming class is smaller, the financial health of the college is still strong due to the college’s strategic plan, which will help align the budget. The Strategic Planning Steering Committee will submit the goals of the strategic plan to the Ithaca College Board of Trustees during the board’s meeting May 17 and 18. After the discussion, the steering committee and senior leadership team will refine the plan to prepare for the board’s retreat in June, which is when the board may formally endorse the plan.

“Balancing next year’s budget will require lean operations, but by recognizing the urgency to make strategic changes now, we can work together to create a roadmap for the college’s continued future success,” Collado said in the email.

Diane Gayeski, dean of the Roy H. Park School of Communications, said the deans will know if budget cuts are necessary and how they will be done after the budget is presented to the board. She said a few sections of courses in the Park School may be canceled, but the overall impact is minimal.

Collado stated in the email that the lower enrollment coincides with trends in higher education for private, residential and tuition-driven institutions. Colleges in the Northeast are struggling to adapt to the changing conditions of who is enrolling in higher–education institutions. According to the Western Interstate Commission on Higher Education, the number of high school students graduating in the Northeast is projected to decrease over the next 10 years. Collado also stated the college was expecting a lower overall enrollment due to a large senior class graduating in the 2018–19 academic year.