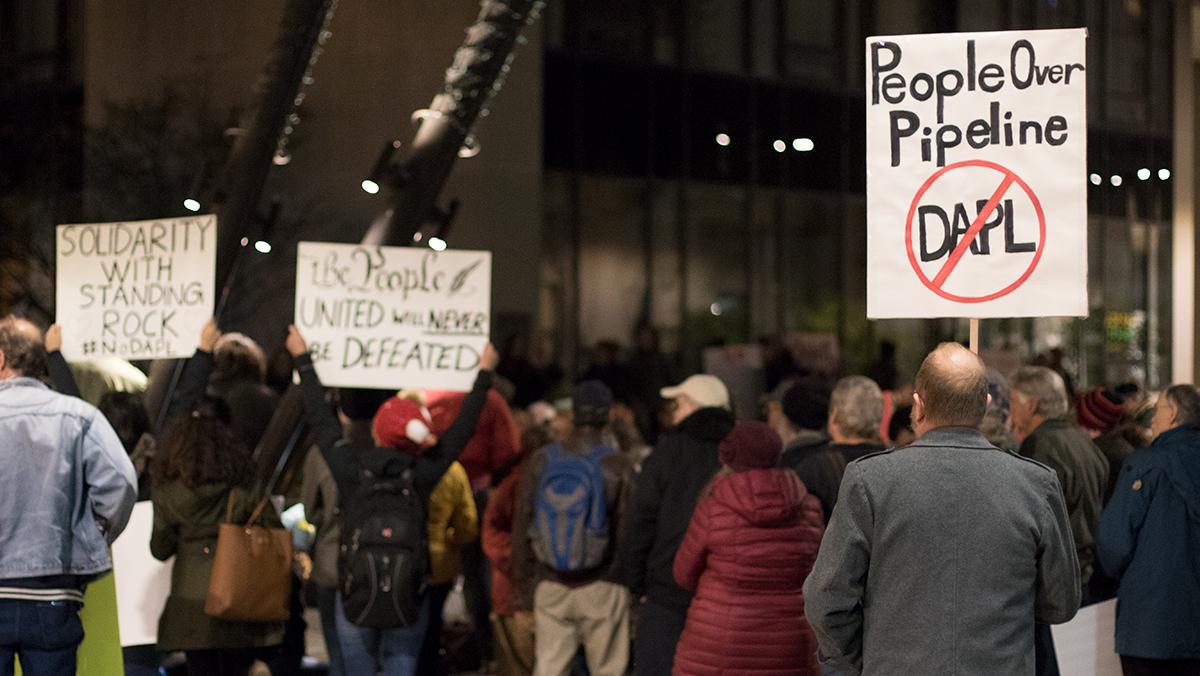 Fernando Ferraz/The Ithacan
About 100 people gathered on The Commons to hold a vigil in support of the Standing Rock tribe defending their land from a pipeline project.
By Grace Elletson, Kayla Dwyer — Assistant News Editor, Editor in Chief
Published: November 16, 2016

Facing the newly completed Bernie Milton Pavilion on The Commons, Ithaca community members gathered the evening of Nov. 15 to rally and pray for those protesting the Dakota Access Pipeline at the Standing Rock Native American reservation in North Dakota.

Marking the National Day of Action in Solidarity with Standing Rock, more than 100 people, including Ithaca College students, listened as members of Cayuga Lake Water Protectors led a prayer vigil following the rally, focusing on the water–related issues both in North Dakota and in Ithaca. Audrey Cooper, a Native American elder, said the group formed in September to bring attention to issues that affect Native Americans nationwide and in the Ithaca community and is led by members of the Cayuga Nation.

Since April, the Standing Rock Sioux tribe has been protesting the creation of the Dakota Access Pipeline because its construction is on sacred burial grounds and risks possible contamination of local water sources.

“When you’re defending water … you’re defending life itself,” said Sandra Steingraber, distinguished scholar in residence in the Department of Environmental Studies and Science, onstage during the rally. “We all must be now like rocks and stand up in our community.”

Some attendees carried signs reading “People Over Pipeline,” “Water is life” and “You Can’t Drink Oil,” then lowered their heads as Joe Soto, a member of the Cayuga Lake Water Protectors, sang a traditional water prayer song to commence the vigil.

After the prayer, Mauricio Medina, a member of the group, spoke to the crowd about the importance of caring for the earth and related this responsibility to the recent election of Donald Trump as president-elect of the United States.

“I don’t see this as being a bad thing with Mr. Trump, who is going to become president, because I think many of us needed a wake-up call and realize that this struggle is going to continue no matter what,” Medina said.

Another member of the group, Alexis Esposito, announced that the group plans to make a trip to visit the Standing Rock Water Protectors in December to show support and bring donations.

Esposito said that while the group wants to bring attention to the Standing Rock protests, the point of the vigil was to bring attention to tribal rights for Native Americans everywhere. She said both the Standing Rock tribe and Ithaca residents protesting a natural gas storage facility at Seneca Lake, along with all indigenous peoples, have a unifying humanitarian right to water.

“The water is the main issue here,” Esposito said. “From an indigenous viewpoint, it’s a way of life around water. Water is life. It’s pervades all life.”

At the end of the vigil, Ithaca local Mia Allee Jumbo — who organized the rally — encouraged attendees to fill a wooden box with their prayers for the Standing Rock tribe.

This article has been updated to clarify the fact that the rally was organized by Mia Allee Jumbo, and the Cayuga Lake Water Protectors organized the vigil. Some language has also been adjusted to reflect more inclusivity in descriptions of water issues.