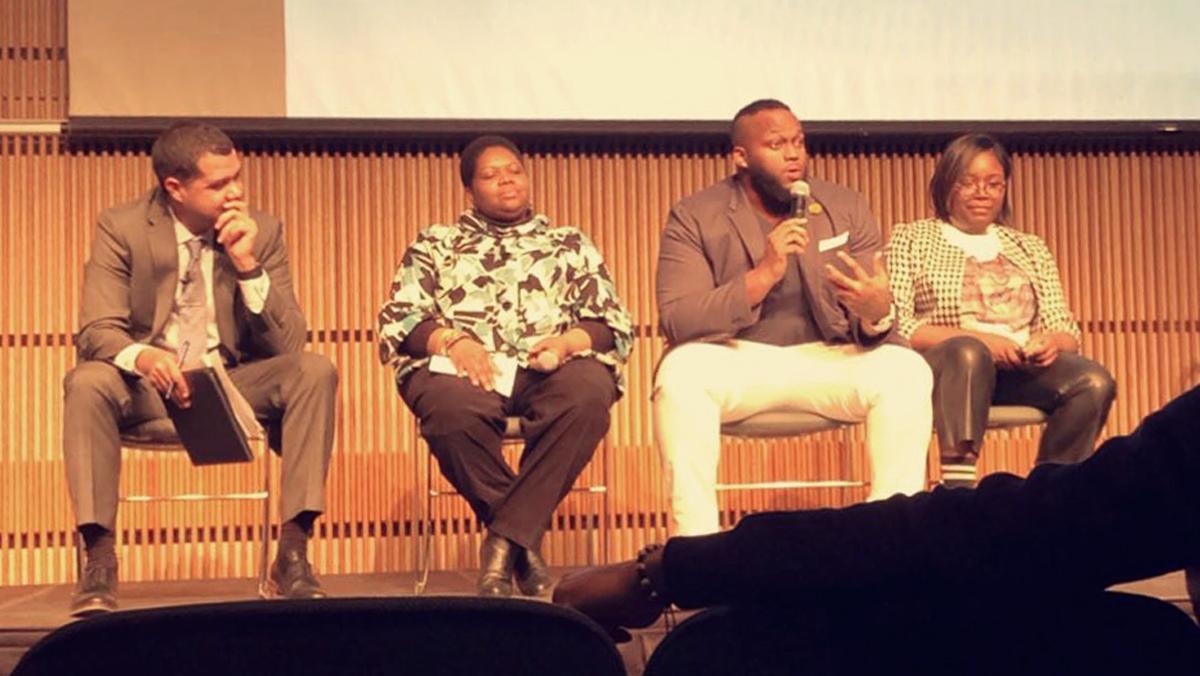 Sean Eversley Bradwell, director of the Center for Inclusion Diversity Equity and Social Change (IDEAS), presented a program on the origins, ownership and usage of the “N-word,” which included a lecture from Bradwell and a panel discussion.

Approximately 70 people attended the program Jan. 30 in Emerson Suites. Bradwell’s lecture detailed the history of the N-word from possible etymologies to the transition from “n—er” to “n—a” as a result of its colloquial use among black comedians and hip–hop artists. The panel included sophomore Yetunde Smalls, student member of the Ithaca College Board of Trustees; RahK Lash, associate director of the Center for IDEAS; and Leslyn McBean-Clairborne, Tompkins County Legislator and deputy director of the Greater Ithaca Activity Center.

The program was held because of a video posted last semester in which sophomore Khush Khemlani used the N-word inappropriately in a social media post. Khemlani did not respond to repeated requests for comment to confirm if she was at the event. Khemlani previously told The Ithacan that she planned to attend the event.

Bradwell explained that the first recorded usage of the N-word was in 1786, but etymologists can trace usage of the word back to the 1570s. There are several competing etymologies to explain the creation of the N-word, but Bradwell said that regardless of the origin, the word has always had a negative connotation.

“It’s a way to rob folks of their humanity,” Bradwell said.

Bradwell said one potential origin is a corruption of the word “negar” that colonists such as John Rolfe and John Smith used when they described the arrival of African people in North America. Another possibility is that slave traders referred to the Africans as “necros” after they saw the respect the Africans had for their dead through monuments like pyramids and practices of mummification.

As more slaves were brought to North America, usage of the N-word increased exponentially. It was prevalent in media — like songs and theater — advertisements, census occupational descriptions, and even in town and street names across the continent, Bradwell said.

“All the way up to now, even though we’re having different types of conversations in 2019 and the 21st century, I still feel like it is a gadget on the utility belt of the most radical racist and the most well-intentioned inherently racist person,” Lash said. “It’s intentional.”

The panel mainly discussed in what situations it is acceptable to use the N-word and who could use it, as well as the difference between “n—er” and “n—a.”

McBean-Clairborne said she does not think it is appropriate for anyone to use the word and that there are better ways to take ownership of the African-American identity rather than using a racial slur.

“Of course you have the right,” McBean-Clairborne said. “Yeah, sure you have a right. Should you? No. Don’t. I don’t care for that word, but there’s something about reclaiming. I think they can be reclaiming without constantly putting it out there in your face.”

La Jerne Cornish, provost and vice president of academic affairs, added from the audience that she hoped nobody would use the word, even affectionately among friends.

Cornish added that the word does not have a place in an educational institution like the college.

“That word is so loaded, and when I hear it, it brings me pain,” Cornish said.

Smalls said that because people don’t understand the history of the word, they accept using it without question.

“I think that it has to do with having a colonized consciousness,” Smalls said. “If you’re accustomed to seeing things and not questioning why they are as they are, it’s normal, you’re conditioned. … It keeps us divided as people.”

Bradwell said usage depends on context and what group of people are using the word. Using the N-word can give some people ownership of their history and identity.

“When you have been bought and sold for centuries and you have had prices put on your soul, the only thing you control is language,” Bradwell said. “It’s an intent by some folks to take control over the one thing they can own.”

Freshman Sarah Moon said the lecture changed the way she thought about who uses the N-word and how she would react.

“I think it was a very powerful experience, and more people should have been here,” Moon said. “When I hear it in a song and when I hear people use it — I’ve heard some white people use it in very insulting ways — I think I’d be more likely to say, ‘That’s not cool.’”

Editorial: College should react to racist video with nuance