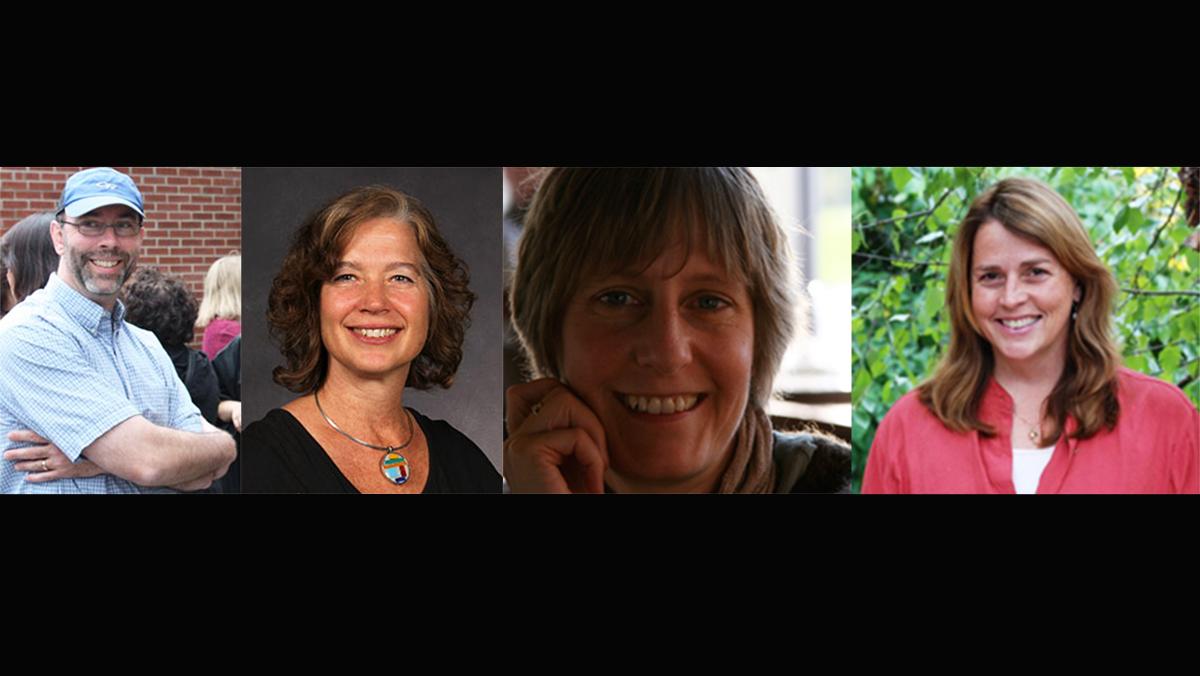 Photos from Ithaca College website
From left, faculty members Jason Hamilton, Kathryn Caldwell, Julia Lapp and Mary Bentley held a forum for faculty on how they can incorporate sustainability into their curriculums.
By Madeline Veneziano — Staff Writer
Published: December 2, 2016

Faculty and students gathered at the Center for Faculty Excellence on Nov. 30 to discuss ways to incorporate sustainability into their course curricula.

Four faculty members led the majority of the conversation about teaching tools other professors can use to include sustainability in their classes. Kathryn Caldwell, assistant professor in the Department of Psychology, led the forum, saying the purpose was also to inspire cross–collaboration among different schools and courses.

Jason Hamilton, professor and chair of the Department of Environmental Studies and Sciences, said he is interested in the broken relationship between humans and their natural environments. One exercise Hamilton said he teaches to address this issue is called the sit-spot exercise. He sends a student into a natural area to sit for a given amount of time without moving at all. The students are sometimes given instructions, like to count how many trees they see or different bird calls they hear, but other times, they are sent without instruction. The exercise ends with an open discussion and a reflective essay.

He said some students, especially ones who have not had much exposure to nature in the past, find this exercise incredibly difficult. In the end, he said, students learn from this experience, which is new to most of them, and he said that it helps them start to connect to a specific place in the environment.

“What I’ve found from doing this is that for most people, most of the time, it is a profoundly moving experience just to go sit in the woods for 20 minutes because very few people have done it before,” Hamilton said.

Mary Bentley, associate professor in the Department of Health Promotion and Physical Education, said she agreed with Hamilton that people have become disconnected from their environments.

One part of her class’s curriculum, she said, is bringing in an acupuncturist. She said they discuss the theory of acupuncture, how it was developed, what a diagnosis is and how it relates to personal sustainability.

Discussing food and sustainability is something Julia Lapp, associate professor in the Department of Health Promotion and Physical Education, does in her classroom. She said one of her goals in classes is to try to get students to rethink their relationship with food. One relationship she said has changed over generations is the ability to prepare food and the knowledge of food. Lapp said that in some of her classes, she has encountered students who have never cooked before and grew up in families that did not cook, either.

Hamilton said he sees this disconnect with the fundamental skills of living. In some of his classes, he said, he has to teach students how to strike matches, build fires and chop wood.

“It goes back to this astounding disconnect between what it means to be alive,” he said.

The forum ended with Caldwell’s showing some proposals and projects about sustainability that have come from her students. For example, this past spring, she said, her Conservation Psychology class started a composting pilot program in the Terrace Dining Hall.

Rasoul Rezvanian, associate dean of the School of Business, said he attended this event because he is interested in the topic and assessment of sustainability. He said that by attending this event, he has learned there are differences in the definition of sustainability, depending on what background and field you come from.

“This gathering gave me a different perspective on what sustainability is in different discipline,” Rezvanian said.

Caldwell said that right now, because many top-tier administrative positions are open, she sees an opportunity to change the way the college focuses on sustainability.

“We have an interim provost,” Caldwell said. “We don’t have a new president yet, so now’s a time to find the people who represent our values.”

The United Nations Climate Summit took place Sept. 23 in New York City, where world leaders came together to draft a framework for their fight against human-induced climate change. Upon analyzing the meeting’s outcome, some people in the Ithaca College community felt the draft could have been more comprehensive.