Regulations on laptop use in college classrooms differ among professors 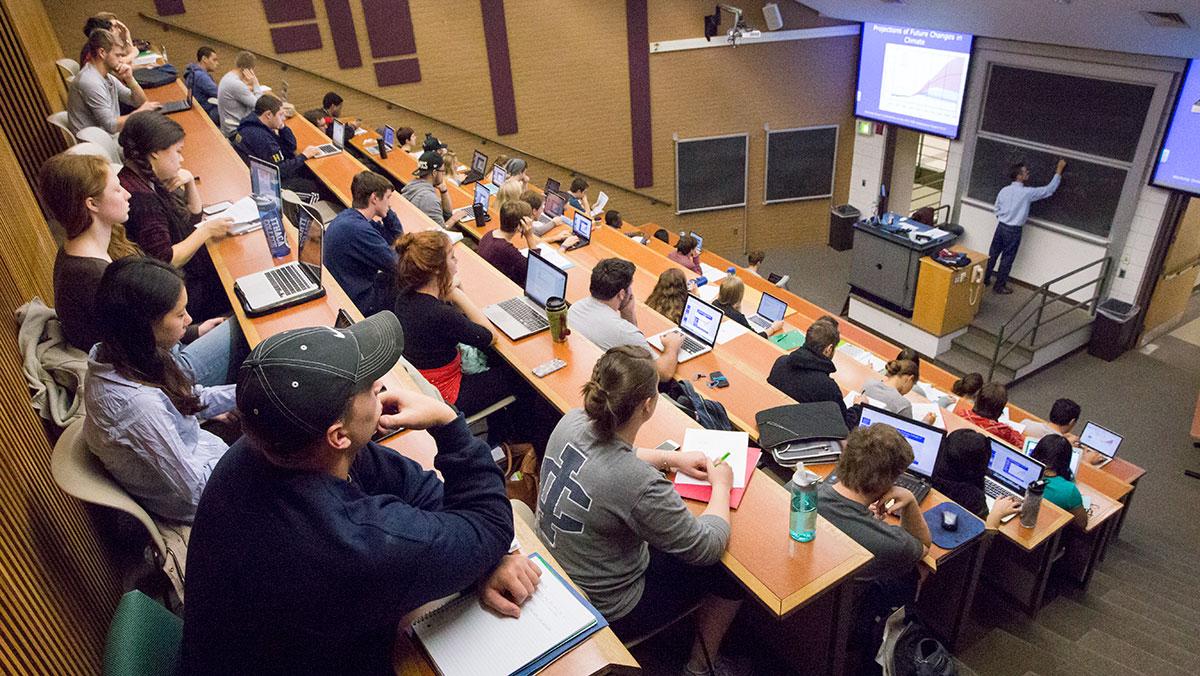 Corey Hess/The Ithacan
Students take notes on their laptops and by hand as John Hopple, a lecturer for the Department of Biology, teaches his Environmental Biology course in Williams 323.
By Maura Aleardi — Staff Writer
Published: October 8, 2014

Without a school-wide policy on using laptops during class, Ithaca College professors are left to create their own rules.

Laptop use in the classroom invariably leads to concerns of distractions and debate over technological etiquette. But it’s also a common practice — the Center for Research on Learning and Teaching found that among 1,415 students at the University of Michigan, more than 50 percent bring their laptops to class at least once a week.

One approach some professors at Ithaca College have taken holds students accountable for note-taking by checking their work. Nate Prestopnik, assistant professor in the Department of Computer Science, said he grants permission to students who ask to use laptops for note-taking. Throughout the semester, he said, the teaching assistant for his classes checks the students’ notes for completion.

Prestopnik said this allows him to authorize laptop use without needing to deal with distractions.

“[This policy] gives me the flexibility to let there be laptops in class for students who really, genuinely want to take notes on them, but it kind of gets rid of the Facebook’s and the YouTube’s and all the other stuff that’s happening on screens,” he said. “It does have a pretty good effect — students pay attention, take notes. So it works.”

Rebecca Plante, associate professor in the Department of Sociology, does not allow any electronics in her upper-level sociology classes. She said class without laptops encourages more positive ways of focusing and learning.

“In general, the overall learning environment without electronics is more engaged, productive and relaxing for all students,” she said. “That outweighs the benefit to one or two students, who may otherwise wish to multitask online during class or use a laptop to type notes.”

Plante said she has heard feedback from other professors who said students thanked them for banning electronics because they appreciated a break from the distraction.

The CERT study found that three quarters of 600 student respondents said laptop use in class increased the amount of time they spent on tasks not related to course material, and about 35 percent spent more than ten minutes on social media or email during class.

Having a rule against laptop use would strongly benefit students’ education, Matt Holtmeier, postdoctoral teaching fellow of media arts, sciences and studies, said.

“Peers would not be distracted by them,” he said. “Students would not be negatively impacting their own education. I’m not personally invested in making rules, though. I suggest students look up the research on learning habits and think critically about their own use of technology.”

Barbara Howard, associate dean and director of the master of business administration programs in the School of Business, said she has heard from students who do not favor the use of laptops in class. She said students get distracted by others who are using laptops.

While some professors are against the use of laptops, Diane Gayeski, dean of the Roy H. Park School of Communications, said she remains supportive of in-class laptop usage. Some classes, such as S’Park: Igniting Your Future in Communications, require the use of laptops, she said. Though it is up to the professor to decide what the policy should be, she said it would be unreasonable to completely ban the use.

“Professors need to manage this like they manage other aspects of behavior in classes,” she said. “It would clearly be inappropriate to ban laptops, especially since they are required for Park students, and many in-class exercises depend on the use of laptops.”

Howard said there are some benefits for using laptops in class. She said they would be helpful in a finance class as a tool for looking up current data instead of using an outdated textbook.

As a TA, senior Andrew Sowers is able to see from his back-row seat what students do on their laptops. Often, students stray from note-taking to social media but eventually switch back, he said.

“A lot of people are on laptops, and they’re on social media, but they also take notes,” he said. “I noticed a lot of people. What they do is they go back and forth.”

While this may be a common practice among students, it is not actually possible, Prestopnik said. He said when people try to multitask, they only become distracted by one of the tasks and forget the other.

“We don’t multitask. We switch tasks,” he said. “Very often, people get focused on that task and stop switching to the thing they’re actually meant to be doing.”

Both Sowers and Will Gelder, fellow senior TA, said they use laptops in most of their classes, but try to remain responsible in doing so. Gelder said he is sure to focus on class and not be disrespectful to the professor.

“I make it a point to myself and those around me to only take notes during class sessions,” he said. “I feel that it’s rude and disrespectful to the professor and anyone sitting around me if I aimlessly search the Web during a class session. Many of us pay a vast amount of money for an education like this, and it seems like a waste of time and purpose to be doing anything else but learning during the short times we have in class.”