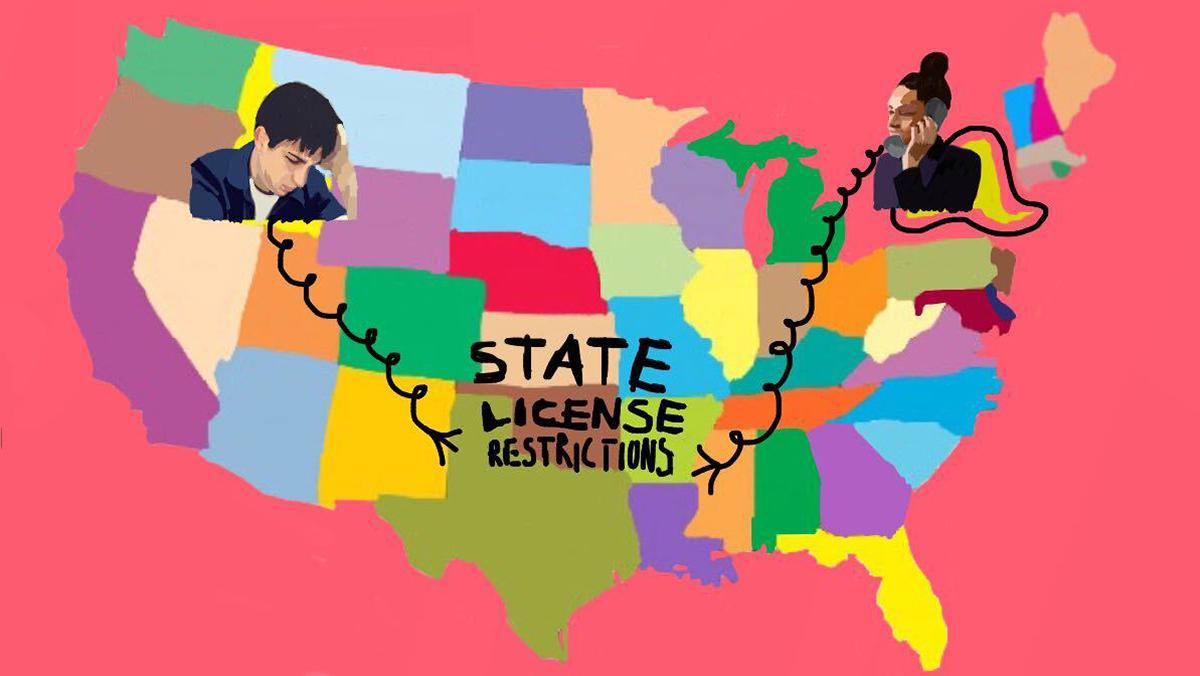 With Ithaca College facing at least a whole semester of remote learning, the Center for Counseling and Psychological Services (CAPS) is navigating barriers in providing clinical services to students outside New York state.

CAPS counselors are limited to providing clinical resources to those residing in the state of New York because certification requirements vary among states. A psychological license only allows the holder to practice in the state they are certified for, according to the American Psychological Association (APA). When colleges suddenly transitioned to remote learning in Spring 2020 because of the COVID-19 pandemic, clinical providers switched to telehealth care without facing legal restrictions. Some state licensing laws allowed for exceptions to the normal state-to-state restrictions during an emergency, like the COVID-19 pandemic. Brian Petersen, director of CAPS, said that counselors took telehealth training in Spring 2020 to become certified to offer virtual services to New York state residents throughout the fall semester.

Clinical counseling includes long-term mental health care from a licensed therapist. In New York state, a psychologist is a health care professional who diagnoses and treats mental, nervous, emotional and behavioral ailments, according to the New York State Department of Labor.

Approximately 250 students are utilizing telehealth for clinical appointments, both individual and group, Petersen said. Petersen said that this is a 27% reduction from last year at this time, a trend that is consistent with other college counseling centers nationally. He said this reduction is likely because of students seeing clinicians at home and a decrease in freshmen.

Petersen said that he expects the numbers to increase in the spring if students are on campus, even though CAPS plans to continue using telehealth appointments until there is a COVID-19 vaccine.

Many have faced mental health challenges during the pandemic. In June, 40% of adults in the United States reported struggling with mental health or substance abuse, according to the Centers for Disease Control and Prevention. Social isolation, anxiety, fear of contagion, uncertainty, chronic stress and economic difficulties may lead to the development of stress-related disorders or increased suicidality, according to the QJM: An International Journal of Medicine.

Petersen said that despite the licensing restrictions, CAPS can still offer nonclinical services, including workshops, crisis intervention and consultation, to students outside New York state. The 24-hour hotline that CAPS added in Fall 2019 is also still available.

“I really want students to think that CAPS is available to them, because we are,” Petersen said.

If CAPS is unable to offer services to a student because they reside outside New York state, they are helping students to find local providers.

CAPS services are at no cost to students. In the U.S., the average cost of a therapy session is between $65 and $250 or more, but most areas of the country charge between $100 and $200 according to Good Therapy, an organization that compiles mental health resources. Dean of Students Bonnie Prunty said students who may not have the financial means to cover the cost of a local provider can apply for the Student Emergency Relief Fund.

For senior Nicole Charland, telehealth was the best option. Charland said that in July she signed up for BetterHelp, an organization that matches the client with a therapist best suited for their mental health needs.

At first, Charland was looking for local providers in Rochester, New York, who would take her insurance but did not find anything. BetterHelp is approximately $65 per session, and once she notified BetterHelp that she was a student, they offered her a reduced price.

Charland said she has done a couple sessions with CAPS, but felt like she did not have enough time in one-hour sessions to discuss everything. With BetterHelp, she is able to video chat her therapist as well as provide daily journal entries that her therapist can read. This keeps her therapist updated daily on her mental health so she does not have to explain everything she experienced in just one session.

“I’ve done both and I really liked the telehealth version more because you’re in your own bedroom and you’re in a safe place,” Charland said. “Sometimes it can feel kind of daunting to go to a therapist office and sit in a therapist’s chair and talk to them straight to their face.”

BetterHelp also offers live chat sessions as a form of communication between client and therapist. The organization also connects counselors and clients across state lines. Charland said her therapist is based in Idaho.

In 2018, the college’s health care provider, Keeling and Associates, criticized CAPS for its inability to meet student demand. Since then, CAPS has hired new staff and created the Let’s Talk program that allows students to talk to counselors outside the counseling center.

There are currently 11 members on CAPS’ clinical staff. Petersen said five or six counselors have become temporarily certified in some states, including Ohio, Colorado, Rhode Island, Massachusetts, North Carolina, New Jersey, California and Maine, so they could continue to provide counseling to students the counselor had previously formed a relationship with. One counselor has a license pending in Oregon, Petersen said.

However, the duration of such licenses varies, with some only available for 30 days and others for up to a year. Petersen said the duration of these temporary licenses depends on state licensing boards. CAPS has kept up to date by utilizing a spreadsheet on state requirements created by The University of Texas at Austin’s Counseling and Mental Health Center. Some states continue to act under a state of emergency, which allows for out-of-state clinical providers to provide services to residents, according to the APA,

The majority of students who attend Ithaca College are from the Northeast, according to the Office of Analytics and Institutional Research. Out of the 5,070 students in Fall 2020 who reside in the U.S., 2,408 of them are from New York state.

United States psychologists are unable to administer clinical services to students in other countries. There are 96 international students enrolled at the college for Fall 2020, many of whom are in their home countries.

Guibunda had been using CAPS before she studied in Spain in Spring 2020. Now, she uses resources in Brazil, her home country. In Brazil, Guibunda said that she used online therapy services provided by the Brazil Ministry of Health at no cost. The services were in her native language, Portuguese.

Dimitrova said she has heard from students who are pursuing psychological services in their home country.

“So one of the things that folks have said is, on the plus side, ‘I’m back home, and I can have therapy at home in my native language,’ which is kind of neat,” Dimitrova said.

However, therapy in one’s home country is not always welcoming. Sophomore Armani Sampat is currently living in her home country, India, and cannot continue with her CAPS counselor who she has built a relationship with since her freshman year.

She said she has struggled with finding a therapist in India because the societal norms are different than in America. Sampat said the most affordable therapists tend to be judgmental because women in India face restrictive societal expectations. Therapists who do not follow the norms tend to be more expensive, Sampat said. Because therapy is stigmatized, Sampat said that her family is not receptive to paying for a therapist in India.

Sampat said that she relocated to Texas when the college transitioned to remote learning in the spring. In August, she moved back to India.

“Every single time I move around, going to a new therapist or new psychiatrist can get extremely hard because you’re starting all over again,” Sampat said. “The point of therapy is to start on a path and continue. But with these constant breaks in therapy, it’s really hard to sort of get clarity on what you’re trying to figure out with your mental health.”

Because Sampat has an international number, she said, it is an added cost to call the college’s crisis line. She said she worked with CAPS to create a list of crisis lines available in India, but she only found therapists who are less understanding of differing beliefs, specifically beliefs surrounding women’s rights.

The Ithaca Ambassadors Program, a student organization that pairs upperclassmen with freshmen to help them adjust to college, is offering guidance to students who may be working to improve their mental health. Junior Kaitlyn Katz, vice president of the organization, said it is not directly affiliated with CAPS and cannot be a substitution for clinical psychology.

“We’re hoping to kind of just be a medium between seeing a counselor and just seeing nobody,” Katz said.

Pei said Active Minds is focusing on reaching out to freshmen to talk through the feelings of disappointment that might come with the semester being remote.

Pei said she would like to see texting services in addition to current telehealth resources through CAPS. This would allow students a more private avenue of therapy. With shared spaces and other extenuating circumstances, talking over the phone or on Zoom are not always viable options for students.

Petersen said he is following the progress of the Temporary Reciprocity to Ensure Access to Treatment Act, or the TREAT Act. The act would allow clinicians to offer services outside the state they are currently licensed in. This would apply during a national emergency or public health emergency. The bill was introduced to the U.S. Senate on Aug. 4.

“COVID aside, it makes sense to open up across state laws so that more providers can see more people,” Petersen said.

He said the APA and other professional governing bodies are also working to create uniform standards so all licensed psychologists will be required to go through the same amount of training regardless of location.

Stewart Cooper, director of counseling services and professor of psychology for Valparaiso University, wrote a study on the impacts of telepsychology in 2019 before telepsychology became a necessity for most.

In the study, Cooper argues that the expansion of telepsychology could help psychologists to bring services to underserved populations, promote social justice and better incorporate cultural factors in their work.

To accommodate students learning remotely, Cooper said colleges can increase their electronic efforts and reach out to help other colleges.

“There’s a very strong national will among college counseling centers to help each other,” Cooper said.