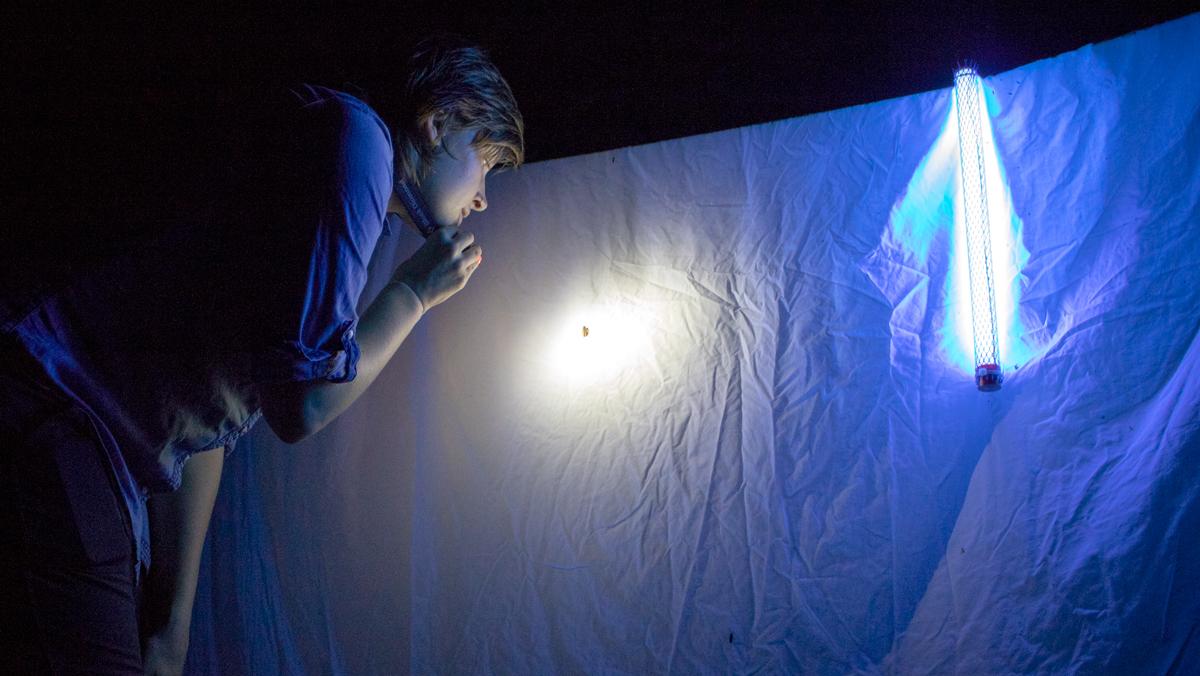 Caroline Brophy/The Ithacan
Senior Allison Brunner performs research for her field guide to moths in the Ithaca College Natural Lands. The completed guide will be available as a resource for the college and wider Ithaca community.
By Mary Rand — Staff Writer
Published: October 23, 2018

While hiking in the Ithaca College Natural Lands on a warm night this fall, a person with keen eyes might have seen a pale blue light between two trees on a path. It would not have been a supernatural encounter — instead, they would have found senior Allison Brunner performing her field research on area moths.

Brunner is working to create a field guide, a reference book of animals or plants meant for outdoor use, of the moths native to the Natural Lands by identifying them, species by species, in the field. She spent nights in Fall 2018 attracting and photographing moths and will later identify them in a lab over the winter and next summer.

Pre-existing field guides, such as the Peterson Field Guide to Moths of Northeastern North America, are often written about the animals of large geographic regions and are therefore not useful for quick reference in a limited area, such as the Natural Lands, said Jason Hamilton, professor in the Department of Environmental Studies and Sciences and adviser for Brunner’s research.

Brunner’s field guide will include entries on local moths as well as entries describing techniques for searching for moths and why the reader should be interested in them.

Moths are not as widely studied as other animals, Brunner said, so she wanted to pursue this project to document and study unknown species. She was inspired by the Venezuelan Poodle Moth, a relatively unknown type of moth discovered in 2009 that has yet to be totally verified as a new species due to limited physical evidence.

There is more beauty to moths than a person may think beyond the image of a dull, gray, common clothes moth that may be seen as more of a pest, Brunner said. She described some species of moths that are so large they sound like birds flapping their wings.

“I think they’re really elegant,” Brunner said. “Ones like the rosy maple moth or the clearwing hummingbird moth — they seem regal in a way. They’ve got their puffy little collars.”

Moths have additional value to the ecosystem, Brunner said. Moths pollinate plants and are food sources for bats.

“If they weren’t here, then the world would be completely different,” Brunner said.

For Brunner, her field guide is a way to contribute to the college and the community’s knowledge of the animals that can be found in the Natural Lands.

“I really like field guides, and I like the idea of one that’s so localized to Ithaca College,” Brunner said. “I want to give back to the ICNL.”

Brunner’s field guide is intended as a resource for both the college community and the larger Ithaca community, Hamilton said.

Jake Brenner, associate professor in the Department of Environmental Studies and Sciences and faculty manager of the Natural Lands, said local projects like Brunner’s are often the first step in building knowledge about a natural area.

“Local natural history, often created by local people in small projects like this, is critically important,” Brenner said. “Often it is the best, and sometimes it is the only, such information available about a particular locale.”

Brunner said the opportunity to work with Brenner was another motivator to do research in the Natural Lands. Brenner was the first professor she met at the college before applying, and he has been a means of support for her since then, Brenner said.

The project is part of a senior–year research requirement for the environmental studies major. Students may pursue an independent study or internship or perform their own research, Hamilton said. Brunner conceived the project in Spring 2018 and began her fieldwork earlier in Fall 2018.

Time in the field for Brunner meant spending a few hours a night in the Natural Lands monitoring the moth-attracting setup — a lamp that gave off a blue light set against a sheet — and ready with a camera to photograph the moths that landed on her sheet. On a good night, Brunner said, she could photograph 20 individual moths.

With fall setting in, Brunner said, she is going to move to the lab portion of the project because moths are not active in the cold. She plans to spend time in the lab reviewing her photographs, classifying the moths she found in the field and writing the informational portions of her guide.

Over summer 2019, Brunner will be back in the field, working into the fall. She will be spending Spring 2019 in California and Oregon as part of the Outdoor Adventure Leadership Program, interrupting her ability to research, she said.

Cultural trends are supporting moths in their own unique way with moth memes, a viral image of a moth at a window that pokes fun at the attraction moths have for light sources.

“People keep tagging me in them and sending them to me,” Brunner said. “I think they’re really funny.”

Brunner also said searching for moths is a way to tap into her childhood memories.

For a time, Brunner said, that went away. She originally attended the University of New Haven to study music industry, but a period of unhappiness there prompted her to rediscover herself and her childhood appreciation for the outdoors through environmental studies. The college’s program and the Natural Lands encouraged Brunner to transfer in Fall 2017.

Hamilton said he hopes Brunner’s project will spread a simple appreciation for the natural world in the community and especially the nature found in the Natural Lands.“These creatures out there are just as much our community as the person in the building next door,” Hamilton said. “I would hope people would say, ‘Wow, I didn’t even know,’ and go spend some time out there.”