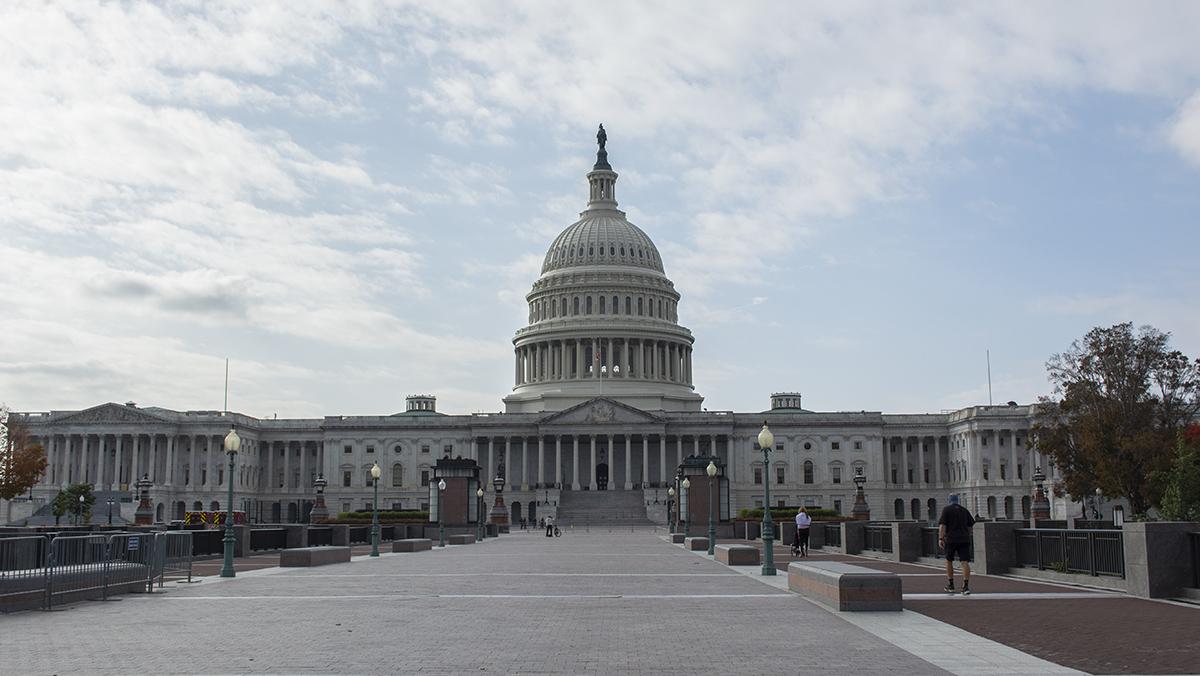 Eleanor Kay/The Ithacan
The Ithaca College Republicans posted a now-deleted tweet, saying, “Whatever goes around comes back around,” at 3:35 p.m. Jan. 6, in reference to the rioters orchestrating a violent insurrection against the federal government and storming the U.S. Capitol Building, forcing it to go into lockdown.
By Alexis Manore — News Editor
Published: January 7, 2021

Ithaca College Republicans are receiving backlash from the Student Governance Council (SGC) and some members of the campus community after the organization’s Twitter account voiced its support for pro-President Donald Trump rioters who mobbed the U.S. Capitol Building on Jan. 6.

IC Republicans posted a now-deleted tweet, saying, “Whatever goes around comes back around,” at 3:35 p.m. Jan. 6, in reference to the rioters orchestrating a violent insurrection against the federal government and storming the U.S. Capitol Building, forcing it to go into lockdown. Many of the rioters were armed, and two pipe bombs and a cooler of Molotov cocktails were found near the Capitol Building, according to the Metropolitan Police Department of the District of Columbia. One person was shot inside the Capitol Building and died, and there were three other deaths due to medical emergencies.

IC Republicans then retweeted a statement from the College Republicans National Committee that condemned the violence and voiced its support for the law enforcement, first responders, elected officials and staff who were caught up in the riots.

“Violence, in any form and in the name of any political or policy preference, has no place in America,” the statement said. “Any individual engaging in violence today or in the name of the Republican Party or Conservative Movement is hurting the very cause they espouse to support — they are not welcome in the College Republican organization or the Party at large.”

The SGC denounced IC Republicans’ original message in a series of tweets.

“SGC condemns the tweet made by IC Republicans,” the SGC wrote in one of the tweets. “Our organization respects transitions of power and the founding documents of our nation. SGC strives to foster a campus community that is inclusive and safe for all members of IC, this tweet actively disregards that idea.”

The riot was an attempt to stop Congress from certifying President-elect Joe Biden as president of the United States. Trump had called for Vice President Mike Pence to refuse to certify the election results — which he refused to do — and to allow states to decertify their electoral votes. Trump and his supporters have been attempting to undermine the results of the election and have made allegations of widespread voter fraud since before the election took place. There is no proof of widespread voter fraud interfering with the election, yet Trump keeps pushing the rhetoric that the election was fraudulent.

Trump at first did not tell rioters to stop their actions but rather to “stay peaceful.” In a now-removed video posted to Trump’s social media accounts, Trump asked his supporters to stop their siege on the Capitol.

The SGC said in a tweet that it will further address the situation at an upcoming Senate meeting.

“To our community members alarmed by the remark made by IC Republicans, we stand in solidarity with you and will continue to denounce dangerous language and acts that put our community at risk,” the SGC wrote in the tweet.

“I hope whoever tweeted this gets expelled from IC,” user @somebassoonist tweeted. “I don’t want to be on the same campus as someone who responds to an attempted coup with ‘but the libs started it.’ Disgusting.”

Some students have contacted members of the college’s administration and called for it to conduct an investigation into the tweet and revoke IC Republicans’ affiliation with the college.

Ithaca College President Shirley M. Collado said in a statement that she was shocked by the display of violence and destruction in the Capitol.

“It is very clear that the purpose of this attack on our democracy is to disrupt the process of a peaceful transfer of power and to foment fear, intimidation and terror,” she said in the statement. “Not only must we decry this activity — and the individuals who participate in it or condone it — but we must use this moment to affirm our collective responsibility, as a nation, to engage across difference with respect and grace.”

The statement was shared on the college’s social media accounts, where some members of the campus community further expressed their frustration with IC Republicans’ tweet.

“If this statement truly reflects our values what actions will the college take to condemn the statement made by IC Republicans today?” user @kayleigh.arnold wrote on Instagram. “The actions of this group in recent weeks really doesn’t seem to go with the college’s statements on equity and inclusion.”

“Good statement,” user @randomerey wrote on Twitter. “Now stand by it and strip the IC Republicans of any recognition they get from the college.”

“President Collado’s statement decrying individuals who participate in or condone what took place today in Washington, D.C., applies to all, including anyone who might be a member of the IC community,” Maley said via email.

IC Republicans has recently faced backlash for making unsubstantiated claims about widespread voter fraud in a commentary for The Ithacan, which has since been removed. The commentary, written by senior Michael Deviney, president of IC Republicans, was reposted with the untrue claims addressed.

Deviney has not responded to requests for comment at the time of publication.

The organization tweeted Jan. 7, “The Ithaca College Republican Club in no way supports mob violence by any group!”

The organization then released a statement Jan. 7 that denounced the violence that occurred in Washington D.C. The statement did not reference the original Jan. 6 tweet.

“As a strong believer of our nation’s values and of our great Republic, we espouse the right to peacefully protest, and in no circumstances do the IC Republicans endorse or condone actions that brutally tear down or destroy the sacred essence of our history that takes place at the Capitol,” the statement said. “The violence done in Washington D.C. is utterly disrespectful to our Congress and should be condemned.”

In a Nov. 5, 2020 interview with The Ithacan — before Biden’s victory was announced — Deviney said he thought that Republicans would not hold riots if Biden were to win.

“If Joe Biden wins, as a Republican, all my Republican friends, we are not going to loot the streets and violently protest,” Deviney said.

IC Republicans also faced backlash from the college community in recent years about racial insensitivity and cultural appropriation, and for politicizing the death of a woman who was allegedly murdered by an immigrant who entered the country illegally, after her family asked for people to stop politicizing her death. IC Republicans did apologize for this.