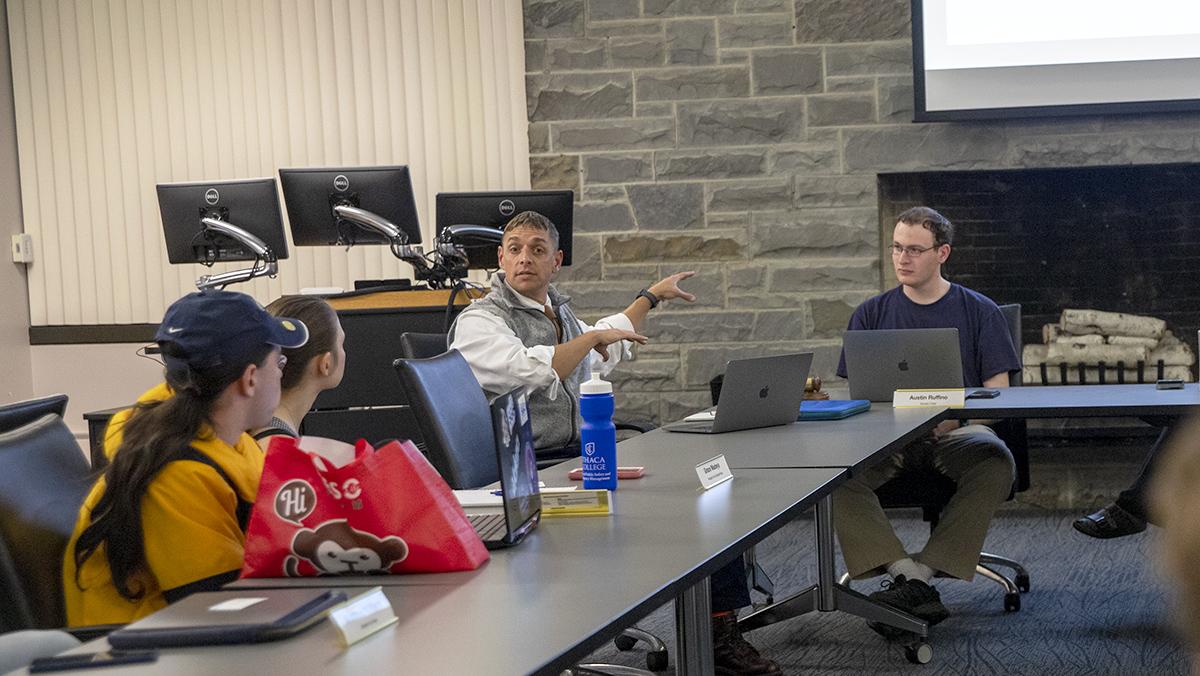 Doyle studied biology at the college and taught environmental classes at the college as an adjunct professor. After serving as the associate planner for the Tompkins County Department of Planning and Sustainability for the past 15 years, Doyle said he was inspired to return to campus after the SGC passed the Green New Deal during Spring 2021. He has now been working at the college for four months.

“I really appreciated how [the senate] took some of the attention that was in town with the Green New Deal and then made it here on campus,” Doyle said. “There’s a lot of things there that I’m really interested in advancing.”

When he entered the directorial position at the college, Doyle said he looked into past records of sustainability to see where the college is and how it can improve in the future. He said he referred to the Sustainability Tracking, Assessment & Rating System (STARS) rating for the college, last reviewed in 2019. STARS is a program for higher education institutions to self-report their sustainability through categories like academics, engagement, operations and administration. In 2019, the college received a gold rating, the second highest award offered.

Doyle said he wants to create a more unified promotion of sustainability by involving students, faculty and staff from all the schools on campus. He said that engaging the campus would give an opportunity to inform the students on what the college is doing to be sustainable and to receive a wider range of suggestions for improvement.

Doyle said he has been to a few first-year student seminars to meet with students and introduce himself and the Office of Energy Management and Sustainability (OEMS). He said he has also met prospective students at the college’s open house events.

“I’m really hopeful for a strong incoming class to help support all of you moving forward too,” Doyle said. “I think it’s a really positive thing.”

Following his presentation, Doyle asked the senate for any questions or suggestions they may have on sustainability at the college. Senior Senate Chair Austin Ruffino made a suggestion about the recycling process in the residence halls, especially in Garden Apartments and Circles Apartments.

“I know when I got there, I just by default started recycling the way that it works in my hometown,” Ruffino said. “I think everyone just makes it up a little bit. I was wondering if there was any thought to promoting how recycling works on campus to make sure everyone who is going through the steps to recycle is doing it right.”

Doyle responded to Ruffino by sharing that the college processes its own recycling and garbage. Doyle said the county has been successful in promoting what can and cannot be recycled, so he believes that it could be better promoted on the college’s website.

During senator reports, senior senator-at-large Maya Scriven said she is working on implementing braille books at the campus library.

First-year students Asata Rothblatt, Class of 2026 senator, and senator-at-large Dante Conde said they are working on two bills to plant trees and hold stargazing events during sustainability week — an event held by the college the week of Earth Day, which will start April 22, 2023. Junior Utkarsh Maini, School of Business senator, said the School of Business café is now open and that the Dean’s Student Council will meet for the first time this semester Oct. 27.

Senior Grace Madeya, president of the student body, said she is meeting with President La Jerne Cornish on Oct. 26 and asked the senate for anything they want brought up at the meeting. Madeya said she plans to bring up issues in dining, following up on Tompkins Consolidated Area Transit bus services, sidewalks from Circle Apartments to Terraces and the lack of trash cans on campus.

Madeya said she will also be meeting with the Office of Residential Life and the Residence Hall Association on Oct. 27 and again asked the senate if they had anything they wanted mentioned at the meeting. Scriven brought up being more specific on when the fire marshal would be coming to each cluster rather than giving a window of several days for when they were checking the whole campus. She also said issues stated in room condition reports at the beginning of the year have not been followed up. Lastly, Scriven asked that Residential Life look into the Medical Amnesty Policy (MAP) for Resident Assistants (RAs) as there have been occasions where an RA tried to use MAP when calling the Office of Public Safety but was still penalized.

Madeya said she is drafting a bill to create two new senate seats, one for the Students of Color Coalition and a first–generation seat as she said she feels they are large populations on campus that should be represented. Madeya is also drafting an SGC code of conduct.

“One of the reasons I’m really passionate about this is because I believe in laying down a foundation that will impact future people who are part of SGC and I hope that this will help people maintain respect and kindness on SGC even 10 years from now when we’re all gone,” Madeya said.