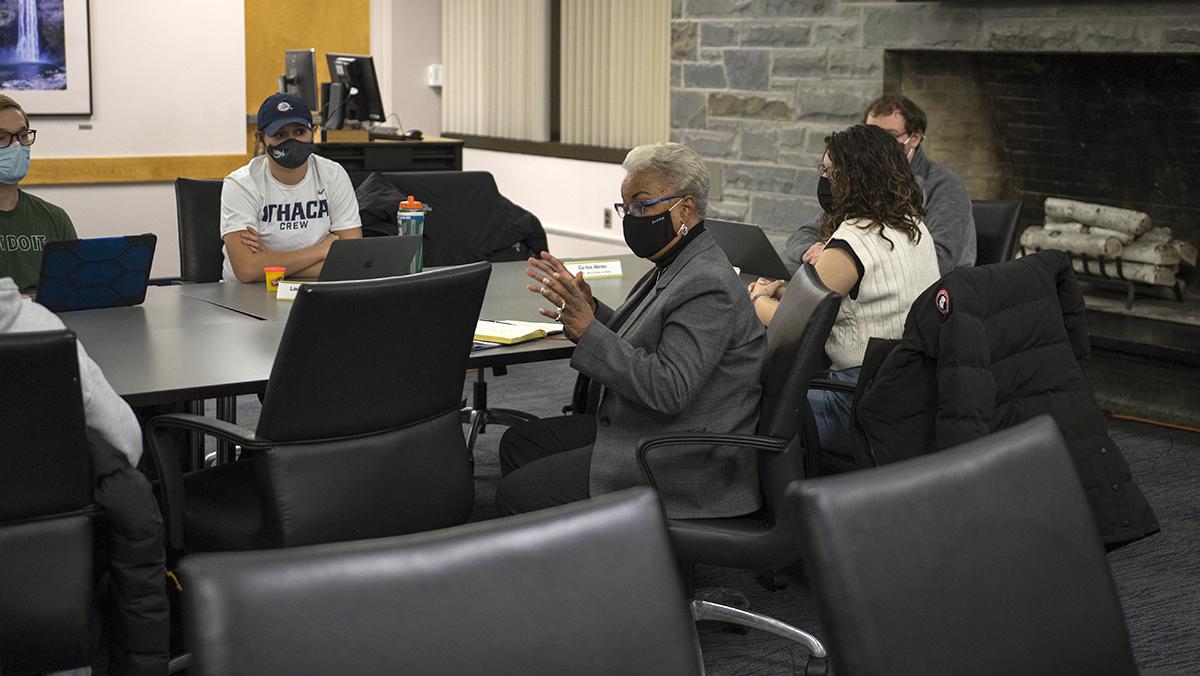 Malik Clement/The Ithacan
La Jerne Cornish, interim president of Ithaca College, said she wanted to focus on three words for the 2021–22 academic year: intentionality, connection and care. She also said she wanted to hear what members of the SGC had to say and what they wanted to discuss.
By Mel Andia — Staff Writer
Published: November 17, 2021

“Let’s be intentional about what we do, what we say, what we think,” Cornish said. “Let us connect with one another. There are too many people walking around who don’t feel connected. … If we can be intentional, if we can connect and we can care, we can be a better institution.”

Junior Connor Watson, student-at-large and former SGC chief of staff, wanted to draw Cornish’s attention to the fact that the fall semester has been difficult for many students.

“I feel like mental health is at an all–time low right now,” Watson said. “I think this transition to all in person, as idealistic as it sounded, has been very challenging on many people for many different reasons, mentally, emotionally, physically.”

Cornish said that if students find they need a break, to let their professors know in order to focus on their well-being.

“Not only can we acknowledge [students struggling], but we also need our students, our faculty and staff to acknowledge it,” Cornish said. “When you need a timeout, raise your hand and say ‘I need a minute, I need a break.’ Let somebody know, and we are willing to listen because we care, but we can’t help if we don’t know.”

According to reports from the National Alliance on Mental Illness, one in four young adults between the ages of 18 and 24 have a diagnosable mental illness and more than 25% of college students have been diagnosed or treated by a mental health professional for a mental health condition within the past year.

Freshman Paloma La Valley, Class of 2025 senator, reiterated the issue of mental health, specifically in terms of the effect the transition to college has had on the Class of 2025.

“I’ve spoken with my constituents, I’ve heard a lot of very unfortunate stories regarding the lack of support from teachers in regards to students’ physical and mental health,” La Valley said. “A lot of [teachers] have not been very accommodating.”

Cornish said the majority of professors are accommodating and are able to help when students reach out to them.

Sophomore James Zampetti, vice president of communication, said he wanted to know if there was a way for clearer communication between the Cornell University Police Department and the Ithaca College Office of Public Safety in the wake of the bomb threat at Cornell and active shooter in Cayuga Heights during the week of Nov. 8.

Cornish said that because there are Ithaca College students and faculty who live in Cayuga Heights, the day of the active shooter, the college sent out an emergency notification.

“I’m going to use the phrase ‘need to know,’” Cornish said. “And when we need to know, we make sure that we notify our students because it’s important for everybody to know what’s going on.”

La Valley asked Cornish if the college was open to working toward creating a hybrid model for education. Cornish said the college made a decision to be fully in person and plans to maintain that position for the foreseeable future.

In Spring 2021, the college operated in a hybrid manner, holding classes both online and in person with 1,143 hybrid classes that semester.

La Valley said she is currently working on a hybrid education model bill to introduce both in-person and virtual education into classrooms to allow students who are sick to maintain their attendance to class.

Junior Tessa Kurtz, School of Health Sciences and Human Performance senator, said some of her constituents have been interested in greater interconnectedness between all the individual schools with each other, and that it is difficult to interact with people from different schools.

Cornish said one of the college’s strategic planning goals is to increase curriculum flexibility and to come up with a college-wide schedule grid to make it easier for students to take classes across schools. Cornish said the college is currently in the third year of the strategic plan. The college is now in the second phase of the APP, which is focused on academic restructuring.

Junior Lila Weiser, senator–at–large, asked Cornish why the college is merging the Department of Theatre Arts with the School of Music and what the timeline for the merger is. The theater department is currently a part of the School of Humanities and Sciences.

Cornish said the college should have a clearer idea of the timeline for the merger by the spring.

Freshman Vincent Tavernese, School of Music senator, said some of the graduate music programs were suspended as part of the APP and wanted to know if any of them would come back.

Cornish said Christina Moylan, associate provost for graduate and professional studies, is working with the music department to think about ways to restart some of the graduate programs in the music school.

“The beautiful thing about suspending is that when you suspend something, you have a chance to evaluate it, and then you can bring back something new or better, stronger, that’s affordable and sustainable,” Cornish said.