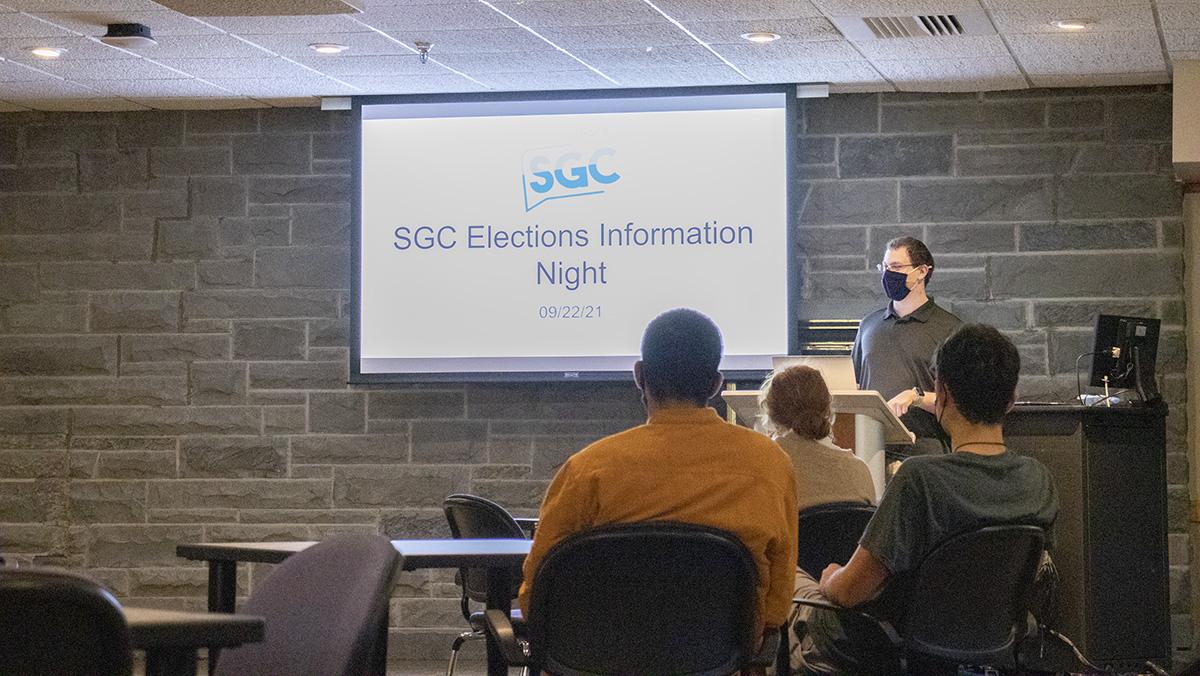 The Ithaca College Student Governance Council (SGC) held platform presentations over Zoom on Sept. 23 for the prospective SGC senate seats for Fall 2021, with many candidates focusing on mental health initiatives.

Tavernese said his main goal is working towards helping music students to achieve a better balance between classes and personal lives.

“Personally, I’m taking 11 [classes] this semester… so it’s more difficult to balance time,” he said. “For a two–hour class we are assigned to do four hours of work outside of class. … That’s a lot.”

He also said he would like to work towards putting a cafe in the James J. Whalen Center for Music, similar to the cafe in the Park School of Communications and the library cafe. The Dorothy D. and Roy H. Park Center for Business and Sustainable Enterprise and the Dillingham Center also have cafes, but both are currently closed, however they may open later this fall.

Hitesman said her main goal was to extend dining hall hours and to put healthier options in the dining halls.

“One of the biggest things I noticed my freshman year was that … I’ll get back to campus around 6:30, 7 at night, and there’d be all the activities that … I wanted to do,” Hitesman said. “But every time that I wanted to participate in one of these activities, I would have to stop and say to myself, ‘Okay, do I want to partake in this activity or do I want to eat dinner?’”

Harman said he wants to increase representation and transparency between the administration and student population. He says that transparency is especially important while the college searches for a new president to replace former president Shirley M. Collado.

“We are the people who put the money into this campus and I feel as though we need to have a bigger word in everything that goes on around here,” Harman said.

La Valley said she wants to work on negotiating a hybrid model for all classes for attendance purposes. She also said she wanted professors to record all classes and post them on Canvas so students who may not be able to attend in-person classes do not miss class. The fall semester is supposed to be all in–person classes, but some professors have made the decision to offer hybrid options or go completely virtual.

“I was sick for a week, and even though I had a doctor’s note after leaving the emergency room, that still served to my detriment for attendance purposes,” La Valley said. “And I feel like no students should be put through that, having to jeopardize their physical health, for the sake of their grades. So I really want to fight for that hybrid model.”

She also said she wants to focus on improving the dining options and wait times, as well as improving academic and social resources, specifically for networking and outreach.

Richardson said he wants to focus on easing the transition of the freshman class into college life, specifically in the transition from online high school to in-person college classes because of the COVID-19 pandemic.

He also said that he wants to work toward improving the Center for Counseling and Psychiatric Services (CAPS) response time.

“I know a lot of students are struggling mentally with this adjustment and are either doubtful that CAPS will respond to them, or … impatient enough to [not] wait the two weeks to find an appointment, and I think there’s something [that] needs to be done about that because mental health is important,” Richardson said.

Voting for SGC senate positions will open for members of the student body on Engage starting at 8 a.m. Sept. 30 and closing at 11:59 p.m. Oct. 1. Election results will be released Oct. 2.