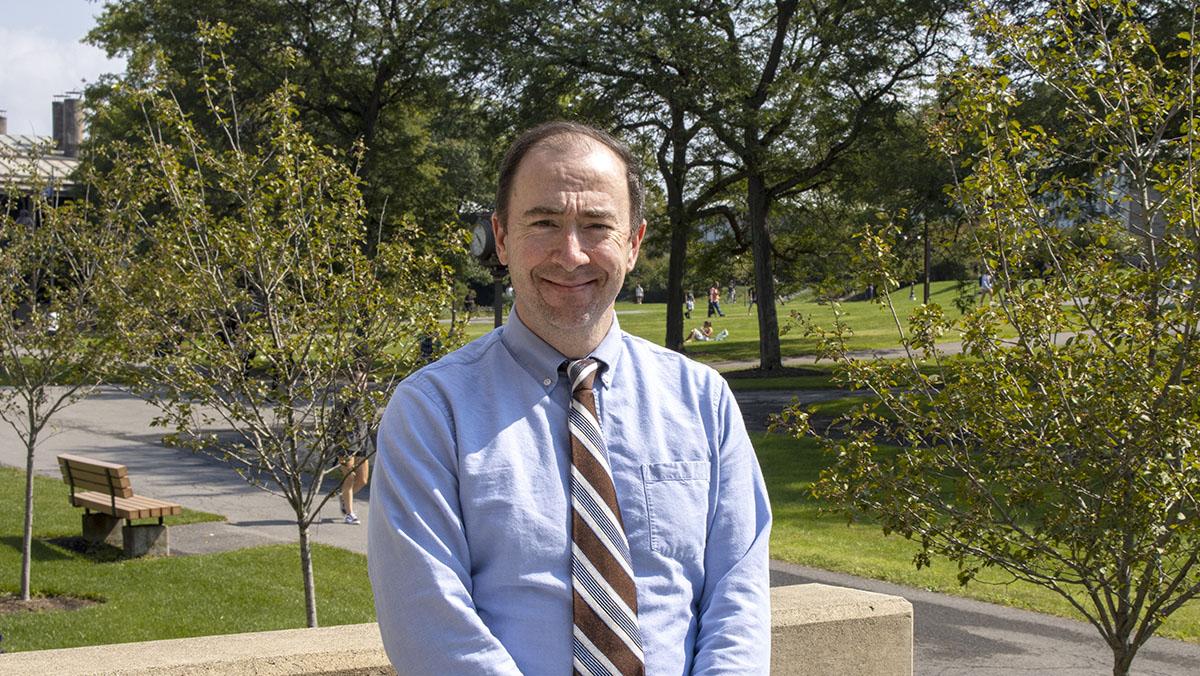 Alyssa Beebe/The Ithacan
Dan Breen, associate professor in the Department of English and president of the college’s AAUP chapter, said the AAUP has a few topics it is focusing on this semester.
By Caitlin Holtzman — News Editor
Published: September 22, 2021

The Ithaca College chapter of the American Association of University Professors (AAUP) is calling for transparency and shared governance during the search for the tenth president of the college.

Dave Lissy ’87, chair of the Ithaca College Board of Trustees, and Jim Nolan ’77, vice chair of the board of trustees, announced in a Sept. 17 email to the college community that the board has assembled a search committee to begin looking at candidates for the tenth president. However, the board did not announce whether the search will be open or closed. The search for former president Shirley M. Collado began as an open search, in which candidates would have been made public and brought to campus for meetings, but was later closed by the presidential search committee. Some members of the campus community have said they want this search to be open.

The AAUP works to advance academic freedom and shared governance in higher education. The college’s AAUP chapter was created in January 2021 in response to the 116 full-time equivalent faculty and 26 majors, departments and programs that have been and will continue to be cut as part of the Academic Program Prioritization (APP) process. The AAUP also created a petition in February 2021 calling for the Senior Leadership Team (SLT) and the board of trustees to reject the faculty and program cuts.

Dan Breen, associate professor in the Department of English and president of the college’s AAUP chapter, said the AAUP has a few topics it is focusing on this semester, including the presidential search process. He said the AAUP is also looking into recruiting more faculty to be part of the AAUP chapter and boost the status of the group as a faculty advocacy group. He also said the group wants to create more shared governance between administrators and the wider campus community.

“It’s pretty easy for us — or for any organization — to look at what the institution’s doing and say ‘No not this way, no not that way,’ but I think the potentially interesting side of that is well, what should things actually look like?” he said.

The AAUP released a statement Sept. 20 listing three different principles that it wants the board to take into consideration while the search begins. The AAUP also called for the search to be open.

“By this, we mean that it should be made clear [at] the beginning of the search process that a short list of finalists will be made public; that the CVs and relevant application materials for each finalist will be made available to the campus community and that each will be invited to campus for conversations with faculty, staff, students, alumni and community members,” the statement said.

Breen said the AAUP wants the final candidates to be announced and brought to campus to meet with different members of the campus community. He said he understands that while the college might want to keep presidential searches closed, he thinks it is important for the college to keep the search open and involve members of the community at all stages.

Alexis Becker, assistant professor in the Department of English and a member-at-large of the AAUP executive committee, said members of the AAUP met to discuss concerns they had for the semester, including the presidential search. She said she hopes the board of trustees takes the statement from the AAUP seriously.

“I would like to see a completely open search and I would really like to see, ideally, IC not employ the use of a search firm or consultants but rather employ members of the community to do this search ourselves,” she said.

The statement also said members of the campus community should be able to provide feedback and give input to the board of trustees before a candidate is picked.

Additionally, the board of trustees announced that it will be looking for a search firm to aid in the process of finding the tenth president. In 2016, the search for the ninth president was conducted using the search firm Spencer Stuart. In past administrative searches, the college has used the firm Witt/Kieffer to look for candidates. The AAUP asked that the search be done without a firm and instead use resources and skills from alumni, faculty, staff and students. The AAUP statement also questioned why the college has used search firms for hiring administrators.

The statement said that if the board does use a search firm, it should release an explanation as to why working with a firm is necessary. The statement also said the Student Governance Council (SGC), Faculty Council and Staff Council should all be made aware of how much the college is paying a potential search firm. Becker said she feels like it is important for the committee to share how much a search firm is costing the college as a matter of transparency.

“At present, when there still is some concern about the college’s finances, it would be useful to think about whether this is an absolutely necessary step,” he said. “If the board and the committee decide that it is, then at the very least, the AAUP would prefer that the board and committee think about a different direction to go in terms of which search firm to use … how much does it cost is a question we would like answered.”

The final request in the AAUP statement was that the search committee should have elected members, rather than appointed members. Currently, the committee is made up of 15 different people including trustees, faculty and one student — junior Deontae Guy, president of the SGC.

Breen said that staff and students do not get to specifically elect people to the presidential search committee. He said there are some members of the committee who are involved in other governing boards at the college.

“It’s our view that all of the representatives to the committee should be elected specifically for the task of [the] search committee,” he said. “We feel strongly that that’s a small adjustment that could be made at this stage in the process because it is very early.”

Lastly, the AAUP statement said it is committed to shared governance and believes that each area of the college should be represented in the presidential search committee.

“We urge the board and the committee to adopt these principles, and we look forward to the search process,” the statement said.

Faculty Council discusses search for the next IC president