Some students experience issues at the dining halls 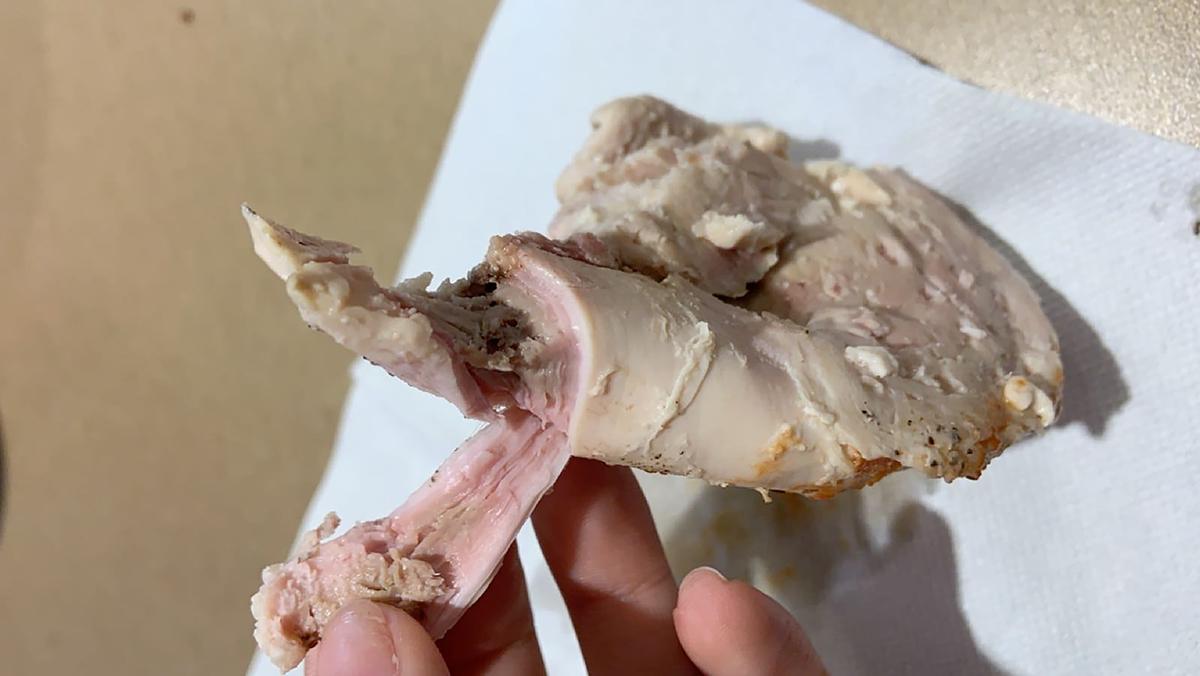 Courtesy of Alexis Quivey
Sophomore Alexis Quivey said she received undercooked chicken and other meat from the campus dining halls. She said she was sick with food poisoning twice during her freshman year.
By Caitlin Holtzman — Assistant News Editor
Published: May 6, 2021

Some Ithaca College students are experiencing issues related to food quality and dissatisfaction with the dining halls over one year after the college transitioned to in-house dining.

In 2019, the college decided not to renew its contract with its long term food provider, Sodexo, after complaints from students regarding the quality of the food, mislabeling and mishandling of food that led to allergic reactions and a knife found in a pot of soup. The college started its own dining program in 2019, brought in local food retailers, changed food providers and worked with Cornell University’s dining services to build a new program.

Quivey said she was disgusted by some of the food she ate in the dining halls.

“The meat that we were getting was never cooked ever all the way through,” she said. “Even stuff that wasn’t meat, some of it would have mold on it if it was something like bread.”

Quivey said the first time she was sick was the night before Cortaca, which was held at MetLife Stadium in 2019. She said she ate a hamburger from the Campus Center Dining Hall (CCDH) despite noticing it was pink on the inside and did not seem fully cooked. Quivey said she assumed it would be safe.

“I couldn’t eat anything for pretty much two days,” she said. “After that, I didn’t eat at the dining hall for a while. I totally refused.”

Instead, Quivey said she would take an Uber to Wegmans to buy her own food to eat. She said that, after a while of buying her own food, she decided to try the dining hall food again because the cost of food was too high to keep paying. She said that, despite not eating meat from the dining halls, she got food poisoning a second time from dining hall food. Quivey said she tried to talk to Dining Services after getting food poisoning for the first time and missing Cortaca. She said she tried to get her ticket refunded.

“They said there was nothing they could do since they couldn’t pinpoint exactly what food it was and how it was made,” she said. “I had no pictures to prove it, so they couldn’t refund me.”

Junior Andrew Becker said a few weeks ago he found a dead bug in his grab-and-go sandwich from the Express Meal Swipe in the Campus Center Lobby.

“I didn’t really know what kind of bug it was, but it was gross nonetheless,” he said. “I kind of just shrugged it off, honestly, I just took the bug off and ate the sandwich anyway.”

After finding a dead bug in his sandwich for a second time, Becker posted in the “Overheard at IC” Facebook group on April 28 to share his disgust.

“I was so grossed out but also so angry, because how does this happen more than once?” he said. “So I just threw the sandwich away.”

Becker said he sent an email to Dining Services to express how he was disgusted by the bugs, but he said he assumed if it had happened twice to him, it has probably happened to other students.

Scott McWilliams, director of Dining Services, said he is not made aware of every negative experience students may have with their food. He said he only knows if students email Dining Services, rather than post on social media.

McWilliams said he believes that dining has improved since the college cut ties with Sodexo. The college also created a food allergy and intolerance-friendly room in CC Dining Hall. The room enables students with food allergies and intolerances to access food that is safe for them. The college established the room in response to previous mishandling of food that caused allergic reactions.

This semester, the college issued students two carabiners to use to ensure that green to-go boxes are returned to the dining halls. All food is served in reusable to-go boxes and students are given a package of plastic utensils to use. Students must drop their carabiner in a box in the dining halls to receive a new to-go box. However, students have posted TikToks of them with chains of carabiners. McWilliams said he hopes the college will not continue using carabiners in the fall semester.

“If I had a clue that people were going to keep them and they were going to put them on TikTok, I wouldn’t have done it,” he said.

He said that he is not sure what dining services will do instead in the fall instead of a carabiner system as the college is still working out plans for Fall 2021.

Sophomore Alexis Zambrano said she has celiac disease, an autoimmune disease that causes the ingestion of gluten to damage the small intestine, and has not felt like the college has fulfilled her dining needs. She said she was hopeful that the college would accommodate her as she met with members of Dining Services prior to the beginning of Fall 2019.

However, she said that even with the accommodations, she has had a harder time with her dining hall experience than she thought she would.

“I have to be super super careful and even eating the gluten free food that [the dining halls] had still made my stomach hurt and made me sick,” Zambrano said.

She said she also ended up buying her own food and making it herself during her freshman year because it was easier for her. She said she was able to get an on-campus apartment for Spring 2021 and only has the commuter meal plan.

In October 2019, the college held a forum for students to discuss issues they have faced with the new dining program. Some students said they noticed undercooked meat from the dining halls, but not from retail dining options like Towers Marketplace. Students said the difference in food quality led them to use more Bomber Bucks at retail options, rather than using meal swipes at dining halls.

Senior Laura Koch said she was upset that it seemed like students tended to use up all of their Bomber Bucks early in the semester. She said it felt like she and her friends always barely had any Bomber Bucks left at the end of the semester or had none at all left. Koch said she wished students had more Bomber Bucks to use to get food from retail food options, like Ithaca Bakery, rather than the dining hall food.

Students who have Bomber Bucks remaining at the end of the fall semester can have them automatically rollover to the spring. However, the money does not rollover from spring to the next academic year.

Koch said she thinks the college should give students more Bomber Bucks rather than students having to refill them themselves.

“For whatever reason, it seems like at Ithaca people are always trying to scrape by and save or just run out all together,” she said.

McWilliams said that seeing students running out of Bomber Bucks can be a good thing because it means they are using them.

“It tells me they’re using them because they like [the retail food options],” he said.

Koch said she was at the college when Sodexo was the food provider, but she said she does not feel like the food has improved since the college switched providers.

“It kind of raises the question of, ‘Was the problem really Sodexo?’” she said. “I don’t know, maybe. It’s kind of murky waters.”