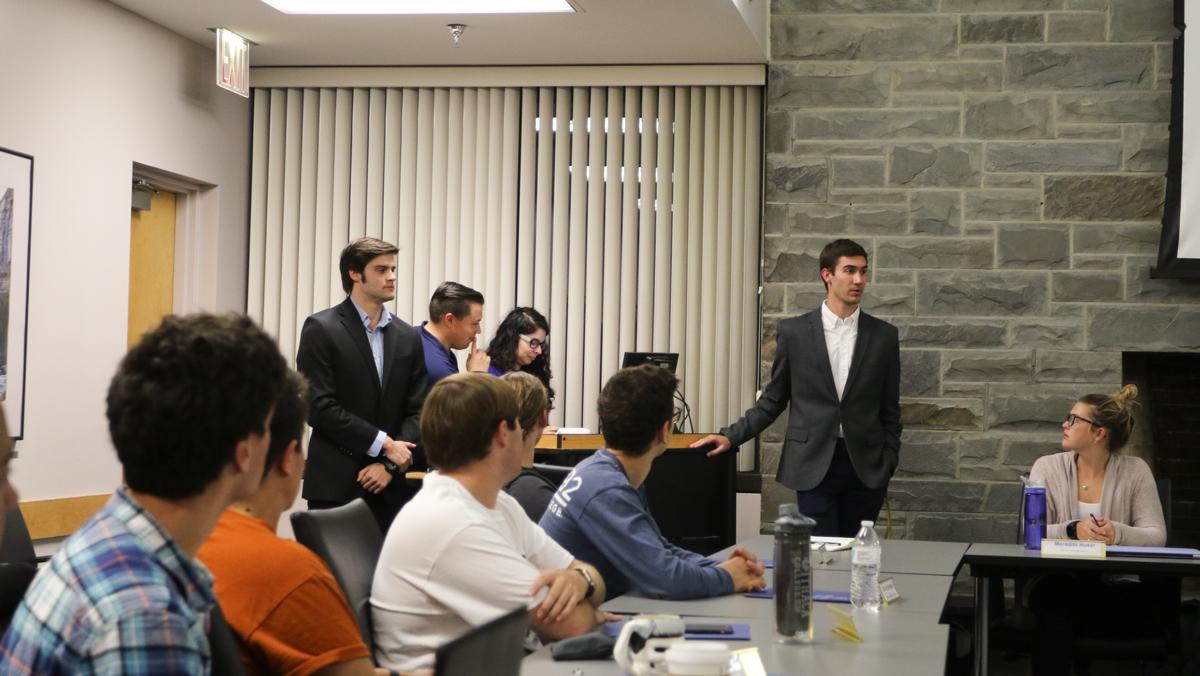 Ryan King/The Ithacan
Junior Charlie Kane address the Student Governance Council about the creation of a Health Professional Connection Program at the college. The bill for the program was passed.
By Ryan King — Staff Writer
Published: October 4, 2017

The Ithaca College Student Governance Council passed its first two bills of the semester during its Oct. 2 meeting.

The SGC passed the Removal and Review of Article XIII Bill 11 to three with one abstention. Senior Conor Friend, vice president of business and finance, sponsored the bill. It proposes to remove the Student Bill of Rights from the SGC Constitution until further review by the Campus Affairs Committee.

The bill directs the SGC Campus Affairs Committee to review the Student Bill of Rights and present its recommendations for improvements to the Senate by Nov. 6.

Friend attempted to remove the Student Bill of Rights during the SGC constitutional review last spring, but was unsuccessful because a majority of senators felt a committee needed to review the bill first.

He argued that the bill of rights includes many provisions that the SGC does not have the authority to guarantee to its students.

One example Friend presented was a clause that guarantees students the right to mental health counseling off-campus if on-campus services are full. It also states that the college would pay for an off-campus professional if students could not afford one. The college does not have a policy in place that fulfills this.

Friend said the SGC should only guarantee students’ rights that are within the jurisdiction of the SGC. He also said that he hopes the SGC can pass future bills to make as many of the provisions in the bill as possible become a reality for students.

“I hope that the Senate finds a way to make a lot of those rights come true, but I think it will require a lot more work than what was originally put into it to give students the rights that were laid out in that document,” he said.

Senator-at-Large Lucas Veca voted against the bill because he wanted to hear from Dominick Recckio — a former SGC president who campaigned for student rights and was heavily involved in writing the bill of student rights. He also said he believes student rights are important to have written out.

“I just had a really hard time seeing why the senate that represents the entire student body should remove the rights of students from our constitution,” he said. “How can we claim to defend the students if we strip them of their rights?”

The SGC also passed the Health Professional Connection Shadowing Program Bill 13 to one with one abstention. The bill proposed creating an ad hoc committee to develop a program that connects pre-med students at the college with local health professionals and clinics. The goal is to make it easier for pre-med students at the college to accumulate enough shadowing hours to apply to graduate school.

Two of the sponsors of the bill — Kane and Meunier — presented it to the SGC. They are both aspiring dentists. During the presentation of the bill, they talked at length about the difficulties of fulfilling graduate school shadow hour requirements.

Traditionally, students shadow their personal dentist or doctor to meet their shadow-hour requirements, but Kane said that not everyone knows a medical professional in the field they want to go into, especially if it’s a specialty field.

During the summer, Kane did research on Dictyostelium with Rebecca Brady, assistant professor in the Department of Biology, but was unable to accumulate shadow–hours because he did not have any connections in the Ithaca area.

Kane said he hopes to get into the School of Dental Medicine at SUNY University at Buffalo. It requires a minimum of 75 to 100 hours of shadowing a dental professional to get into the program. He is currently commuting between Ithaca and his home in Binghamton, New York, to complete those hours, he said.

Meunier said he hopes to get into Tufts University School of Dental Medicine, which requires 75 shadow–hours. He said that during the summer, he aggressively networked with friends and family to accumulate over 100 hours. He said that if the college supports this initiative, it will become much more competitive with pre-med students, noting that Cornell University also does not offer a shadow connection program for pre-med students.

“I am super excited that in the Ithaca area, we are the first to do this,” he said.