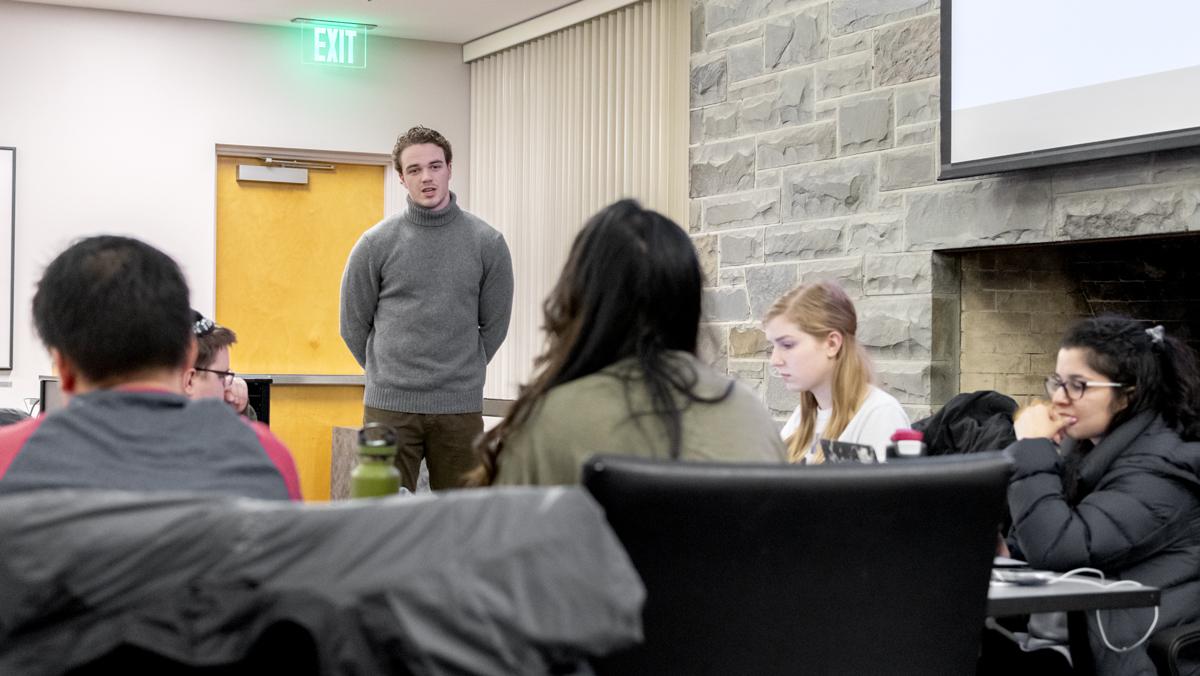 Freshman Henry Wade, Class of 2023 senator for the Ithaca College Student Governance Council (SGC), resigned from his position after a disagreement concerning racial tensions in the Roy H. Park School of Communications occurred during senate confirmations at the SGC meeting Feb. 17.

At the meeting, senators voted to confirm three different students as senators. Two of the students were confirmed while junior Brandon Galione was not confirmed as the Park School senator with a vote of 4–3. The discussion surrounding whether Galione should be allowed to run again as a senator caused Wade to resign.

During Galione’s confirmation, freshman Senator-At-Large Nikita Licudine asked him how he would deal with racial tensions among students, faculty and the administration in the Park School. Students in the Park School have claimed that faculty either perpetuate or tolerate microaggressions, as reported by The Ithacan.

Galione said he is unfamiliar with those issues but hopes to educate himself on whatever problems students are facing.

“I’d definitely want to help in any way that I can and find the majority of the student consensus to work on that to be able to address those issues,” Galione said.

Licudine said she would appreciate if Galione was willing to educate himself about issues of race in the Park School.

“This club isn’t really at liberty to be denying someone that has the potential, that has the discipline and the drive to work on things that he doesn’t really know about,” Licudine said. “I understand that it is a shocker, and, especially being a woman of color, it’s hard to hear that something like that.”

“I think it’s fair to say that maybe most of us who are not ready to have him as per what he presented today,” Shakeel said.

Junior Elijah Nishiura, vice president of campus affairs, said he thinks Galione should educate himself about the issues and come back to the SGC.

“I think he’s showing enthusiasm to do the Park School,” Nishiura said. “If he just needs to go back and bring some more photos and research and show that he has the care, I’m fine.”

In his resignation letter sent after the meeting, Wade said that he believes the SGC should not consider someone like Galione for a position if he is not familiar with the racial issues in the Park School.

“On the one hand, I have always been willing to work with people of differing opinions than I,” Wade said in the letter. “On the other hand, I believe that ignorance is the most dangerous thing that exists in our world. I am unable to reconcile these two philosophical beliefs. Tonight served as an example of this conflict. I won’t work with people that display ignorance and I uncomfortable (sic) working with people that tolerate it.”

Nishiura said the reason the SGC chose not to confirm Galione was that “It is the discretion of the senate, and the senate will make judgments on confirmations.” Wade said via email that he thinks Nishiura’s response “was inadequate and very insincere.”

Freshman Business School Senator Austin Ruffino said via email that he voted against confirming Galione because he appeared uninformed about the issues in the Park School. Ruffino said that he wants to see Galione come back in two weeks to present again and that he thinks Galione would “be a valuable addition to SGC.”

“I have heard various concerns about conditions in the Park School from my peers on campus,” Ruffino said via email. “But it seemed Brandon was not aware of these issues.”

Junior Eva Kirie, vice president of communications, said she thinks the discussion the SGC had about Galione related to what he did not say rather than what he did say.

Kirie said she thinks that Galione was given unfair treatment by the SGC senators after Galione had left the room and that she was disappointed in what the SGC did.

Kirie said that she suggested Galione runs for the school of communications senate position and that, in the four semesters Kirie has been on the SGC, Galione was the first person she had seen denied.

Galione said that he felt when he answered questions from senators they did not seem to appreciate the answers he gave.

“I feel like it was a little bit unfair because people would ask me questions, and they wouldn’t look me back in the eyes, that I’m not answering your question,” Galione said. “To me, that told me all I need to know at that point.”