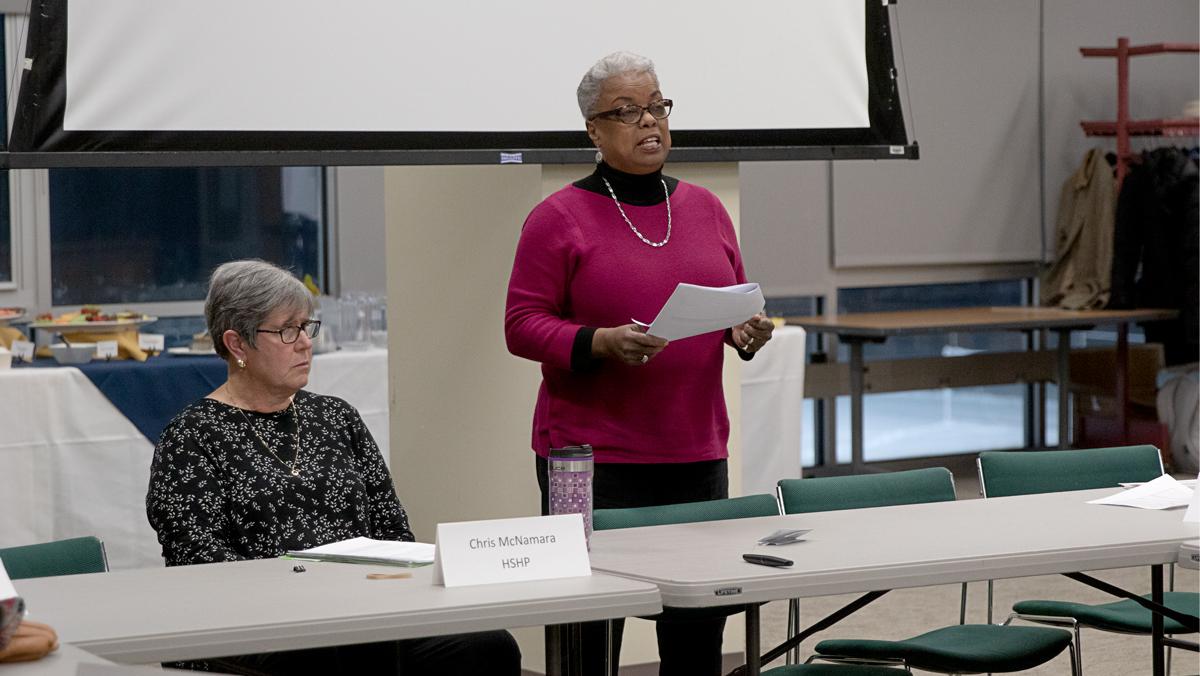 Ithaca College faculty members are beginning to express concerns about the Shirley M. Collado administration’s leadership regarding issues of finances and campus climate.

Certain faculty members, particularly from the Roy H. Park School of Communications, have expressed frustration about the lack of plans presented by the Collado’s administration regarding the college’s enrollment, budget and fundraising, as well as addressing microaggressions in the classroom.

These issues have been raised at faculty meetings with the administration, most recently at the All-Faculty Meeting on Jan. 30, a discussion that escalated when Janice Levy, professor in the Department of Media Arts, Sciences and Studies, read from a prepared statement of her concerns.

She said she and other faculty have felt belittled by the tone and manner that La Jerne Cornish, provost and senior vice president for academic affairs, used when approaching faculty during meetings about incidents of microaggressions in the classroom. Levy said she is frustrated by Cornish’s generalizations made about Park School faculty, vague allegations about microaggressions in the classroom and the lack of solutions provided for moving forward.

In recent years there have been ongoing complaints about microaggressions either perpetrated or tolerated by faculty in Park classes.

The All-Faculty Meeting was hosted by Cornish; Rosanna Ferro, vice president of student affairs and campus life; and Elijah Earl, senior research analyst in the Office of Analytics and Institutional Research, Cornish said via email.

Cornish said via email that the purpose of the meeting was to share the results of the 2019 National Survey of Student Engagement (NSSE). This data is exclusively given to faculty, so The Ithacan cannot access the data. The presentation was followed by a question-and-answer session in which Levy read her prepared statement.

In addition to expressing her concerns, Levy also questioned if Collado’s 2001 no–contest plea to a sex abuse charge, which became public in Spring 2018, has impacted the college’s fundraising abilities. Collado has consistently denied being guilty of the charge.

Levy said she only raised that question because the college’s applications and enrollment have gone down in recent years.

“I was only suggesting that we have to look at every possible reason that things are not going well for Ithaca College,” Levy said. “I wanted people to understand that that in and of itself could be affecting people’s decision to send their children here.”

For the 2019–20 fiscal year, the college made departments cut their budgets to reallocate funds and balance the budget. This move was in response to the projected lower enrollment for the Class of 2023.

At the All-College Gathering on Jan. 28, Collado alluded to imminent changes, including budget cuts that could result in positions and departments being eliminated. At the same meeting, Collado told the campus community that the college is facing a financial crisis because of issues like lower enrollment and stagnant donations.

The college is dependent on tuition and student fees for its funding. As a result, some faculty members are nervous about the security of their jobs and departments at the college. The administration has previously said that the college’s lower enrollment coincides with trends in higher education for private, residential and tuition-driven institutions.

The budget for the 2020–21 budget will not be released until the Ithaca College Board of Trustees meeting in May, Collado said at the All-College Gathering.

During the All-Faculty Gathering, several faculty members attempted to intervene after Levy made the remark about Collado.

Belisa González, associate professor in the Department of Sociology and director of the Center for the Study of Culture, Race and Ethnicity, said she interrupted Levy because she disliked the personal nature of Levy’s attacks on the administration. González said the remarks about Collado and the entire administration were disrespectful and inflammatory.

“When you lead with insults and derogatory statements, any sort of — in my opinion and in my experience — any legitimate questions that you have are going to be completely lost,” she said.

In retrospect, Levy said she regretted making personal remarks because she thinks it allowed fellow faculty members to deflect from her core argument that the college is facing serious issues.

“The only thing that I regret about what I said was that it gave people an opportunity to deflect the conversation away from what the real issues are,” she said. “My intention was to disturb the meeting in a way that would get people to focus on what was really important to talk about in a forum where we have faculty that are together.”

González said although she thinks no administration is above critique, she also believes the faculty is treating this administration differently because of its demographic makeup as a majority woman–of–color leadership team.

“If I was going to call somebody a racist, I would have just done it,” González said. “But I’ve been doing this work long enough to know that it’s kind of almost too easy, and it doesn’t at all expose the nuances of what it means to live in a racialized structure that we participate in whether or not we want to.”

Tom Pfaff, professor in the Department of Mathematics, said in an email thread of faculty members who have joined a faculty-concerns listserv obtained by The Ithacan that he thinks it is inaccurate that people are more critical of this administration because it is predominantly women of color. He said he believes faculty members were also critical of Benjamin Rifkin, former provost and vice president for educational affairs under former Ithaca College President Tom Rochon. Rifkin stepped down after serving for approximately one year.

Faculty, staff and students raised concerns in 2015 about the Rochon’s administration’s handling of campus climate issues, including classroom microaggressions, when the campus community organized protests led by POC at IC that demanded that the administration address the racism on campus. The series of protests were followed by a vote of no confidence for the Rochon administration, and Rochon subsequently resigned in July 2017.

Pfaff said in the faculty-concerns listserv he thinks it is possible that Collado’s no-contest plea to the sex abuse charge could be affecting donations and the number of students applying to the college.

“I don’t think the college is ‘tanking’ because the president was convicted,” Pfaff said in the email. “There are many factors contributing to our financial concerns. But, may the president’s past legal issues be having a negative impact on giving, which has been awful for the last two years, and application. It is a possibility. This all goes back to my main point of that there are viewpoints on campus that are kept silent. In the end this isn’t good for the college.”

When reached out to for comment, Cornish did not directly address the comments made about Collado, but she said Levy’s remarks derailed the conversation about the student experience. The provost’s statement serves as the college’s comment on the faculty meeting, said Bob Wagner, chief communication officer at the college.

“If I could separate [Levy’s] concerns from the manner in which they were expressed, I would say that many of us share some of [Levy’s] concerns: namely, the financial health of the college, the challenges of enrollment in the current higher–education landscape and the challenges associated with recruiting and retaining faculty of color,” Cornish said via email.

Cornish said she will be scheduling another All-Faculty Meeting later this month to continue the conversation about the student experience.

In response to the All-Faculty Meeting, the School of Humanities and Sciences Faculty Senate said in an email to faculty and The Ithacan that it is committed to respectful, constructive dialogue about challenges the college is facing.

“We believe that vitriolic and sweeping denunciations have the potential to polarize us, making it that much more difficult for us to engage in the complex conversations that are so necessary for the health of our institution, our student body and our faculty,” the email said.

Chris McNamara, clinical associate professor and clinical director in the Department of Physical Therapy and chair of the Ithaca College Faculty Council, said via email that the issues raised at the Jan. 30 meeting were concerns that both the faculty and administration share.

“The most central theme of the meeting that emerged in retrospect, however, was communication: how we communicate with each other, with our students and with leadership and how leadership communicates with us,” she said via email. “This meeting sparked critical dialogue among faculty, and, at its regularly scheduled meeting the following Tuesday, Feb. 4, Faculty Council began an open, honest and respectful conversation on these and other topics that we believe are essential to the success of IC.”

At the Faculty Council meeting Feb. 4, the council went into executive session twice and did not discuss any topics on the agenda, which included discussing the All-Faculty Meeting, while in open session.

Cornish did not directly address the fact that some faculty members felt she has been condescending when asked via email.

Jill Loop, instructor in the Department of Journalism, said she spoke up at the Park School faculty meeting because she was frustrated with the lack of steps being presented by the administration to address microaggressions in the classroom.

“There isn’t really a whole lot of guidance [for faculty],” she said. “We’re leaving too much up to anecdotes and rumors and not enough up to ‘This is what’s happening, and here is the proposal to fix it.’

The Collado administration created a bias reporting system in Fall 2018. The most recent microaggression incident that became public occurred at the end of Fall 2019. Students of color expressed feeling uncomfortable after Anne Hamilton, interim lecturer in the Department of Theatre Arts, asked the class to write racial slurs, including the N-word, on the classroom whiteboard Nov. 21 because of a play the class was reading. Hamilton was removed from her position the same day.

Scott Hamula, associate professor and chair of the Department of Strategic Communication, said he and other faculty members feel as if they are not receiving the level of support they should from the administration.

“I think it goes back to some faculty believing that the atmosphere that we have or the climate is less supportive of faculty,” Hamula said. “I think that that needs to be addressed by the administration.”

Hamula said he specifically took issue with a portion of the All-Faculty Meeting in which NSSE data was presented. The data showed students felt that they were not being challenged or supported by faculty, but no information was provided on how to address the issue.

Hamula said he would like to see more meetings between the faculty and the administration. He also said he thinks the college should conduct a faculty climate survey.

Diane Gayeski, dean of the Park School, said via email that she is sympathetic to the faculty members who are worried about the college’s position.

“Nobody among us would deny that unfortunate situations have occurred that have left members of our community feeling unwanted and disrespected,” Gayeski said via email. “We need to acknowledge this and learn how to be better allies. … This is exactly the kind of situation that is bound to lead to miscommunication and anxiety, no matter how well meaning and competent the various parties in the discussion may be.”