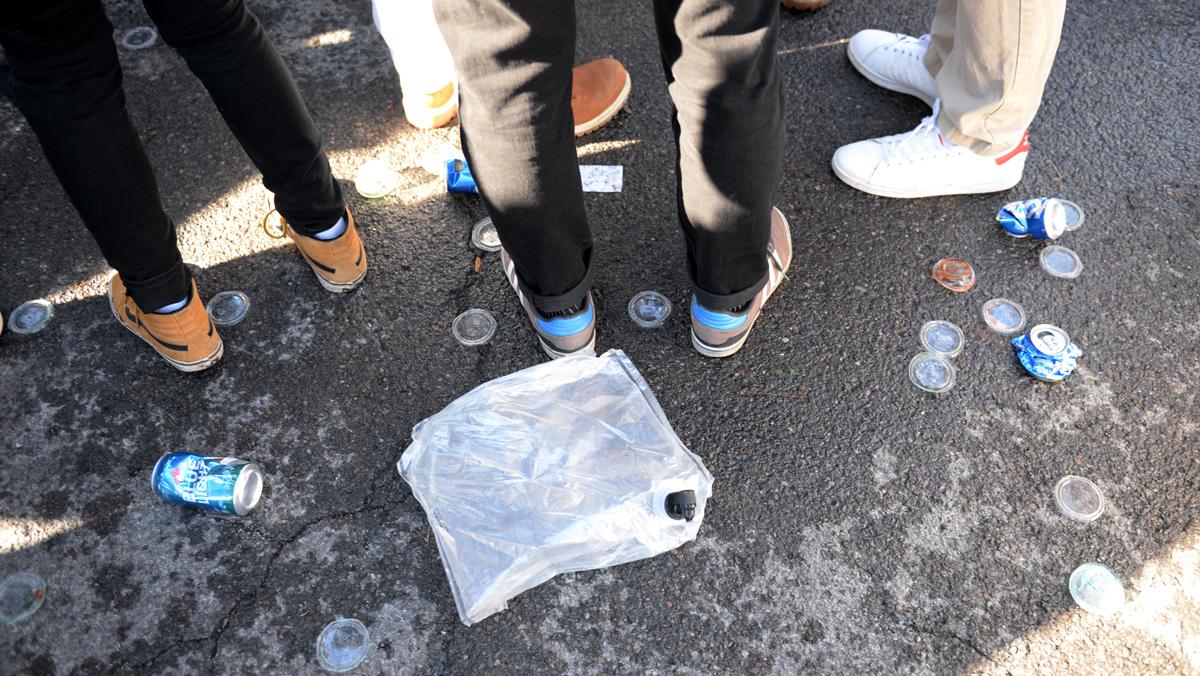 Students, alumni and other members of the college communities from SUNY Cortland and Ithaca College gathered in the parking lots surrounding Butterfield Stadium to tailgate for the Cortaca Jug game Nov. 11. After fans from both schools watched the Bombers win, maintenance and Eco-Reps staff members worked hard to clean up the litter left behind by fans.

The Eco-Reps, a student environmental sustainability organization, have been sorting compost, trash and recycling at all of the home football games this year. Since Cortaca attracts many more fans than the average home football game, they decided that handing out recycling bags would be a better plan than trying to sort through that amount of compost during cleanup.

According to the college’s athletic website, 11,000 people attended the Cortaca Jug game. The average attendance at all other home football games this season was 2,484.5.

The Eco-Reps decided to hand out the recycling bags for the first time this year to make Cortaca as sustainable as possible, Campus Sustainability Coordinator Rebecca Evans said.

“We thought, maybe, the best choice was to try and eliminate litter during the tailgating instead,” she said.

Evans said that while some students were happy to take a recycling bag during tailgating, others were not very accepting.

“I had a lot of students that were really, really negative about the whole idea,” Evans said. “I haven’t seen that before, people turn me down from recycling.”

Ernie McClatchie, director of facilities, grounds and maintenance, said that there are many logistical tasks that have to be performed for Cortaca that are not performed for other games.

McClatchie said the tasks include transporting portable bleachers, setting up additional barriers to keep fans separated and off the field and setting up chutes for organized entry. Other tasks included painting the field, putting out a large number of trash and recycling cans along walkways and setting up over 50 portable toilets. He said he did not have a cost estimate for Cortaca set-up and cleanup.

The biggest and most visible concern is the trash left over from fans tailgating, McClatchie said. He said cleanup for Cortaca starts as soon as the game comes to an end, and the maintenance cleanup team evaluates how much will have to be done.

“This is very unfortunate as this is the not the case for normal games, and it is not the normal tailgaters that cause the mess but people who only show up for this game every two years,” he said. “The litter that is left is disrespectful to the normal tailgaters as well as to the campus itself.”

“With this initiative, we hope to bring positive environmental change among sporting events and create an open conversation about how to properly dispose of your waste to make a positive impact to the environment,” she said.

Evans also said that while there is a toll the campus takes from litter, students also have a prevalent attitude that messes will always be cleaned up after them.

“We’ve kind of gotten into this habit of thinking that the facilities staff are expected to clean up our messes,” she said.

Senior Madeline Mathers said that the Eco-Reps team has been trying to revamp their program this year.

“Even though we have their attention for just a moment, the knowledge goes home with them, and our hope is that they will take that and apply it in their own lives,” Mathers said.

Evans said it was a learning year for the Office of Energy Management and Sustainability and they will take what they learned and use it to plan for Cortaca in 2019.

Win or lose we booze: How Ithaca does Cortaca