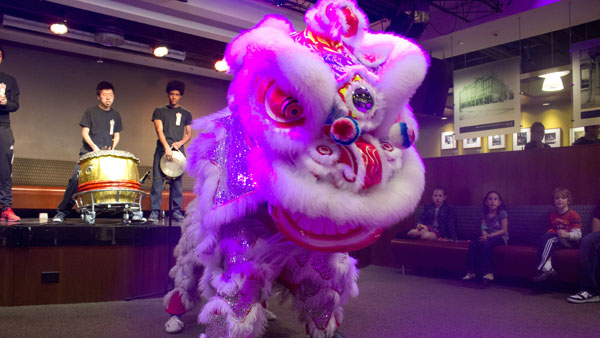 Ithaca College’s Asian American Alliance is planning to give students new perspectives to “focus on” in April.

Under this theme, the AAA is celebrating this year’s Focus Asia Month with six events between April 1 and April 26 that explore Asian and Asian American identities and experiences.

The series kicked off 7 p.m. April 1 in Klingenstein Lounge in the Campus Center with “Focus on Identity,” a student-led discussion panel exploring what it means to be Asian in America.

The next event, “Focus on Filipino Diaspora,” will take place 7–9 p.m. April 8 in Clark Lounge in the Campus Center. Lorial Crowder, the co-president of Metro New York chapter of the Filipino American National Historical Society, will be discussing Filipino immigration history and the relief efforts associated with Typhoon Haiyan, which struck the Philippines in November 2013.

The series will continue in collaboration with Created Equal, a student organization whose projects that address issues and provide solutions to problems facing the LGBT community and marginalized ethnic and gender identities. The two clubs will moderate a workshop about how race and sexuality intersect and influence an individual’s experience within society in an event called “Focus on Intersectionality,” which will take place at 7 p.m. April 16 in Klingenstein Lounge.

Candace Burton, co-president of Created Equal, said the two organizations have been collaborating for three years, and through this event they seek to create a dialogue about how LGBT issues stem across any race or gender.

“Not only is [the AAA] a great organization, but being gay and Asian is something that is not talked about in either community,” she said. “An LGBT person does not look a certain way and can be from any race, class, gender or ethnicity.”

Historically the largest event of the series is Asia Night, to be held at 7 p.m. April 19 in Emerson Suites, which AAA President junior Vivian Lin said draws a crowd of both students and community members with its food, performances and activity booths.

“We have a bunch of discussions and serious events, but it’s nice to kind of relax and break free from that, especially so close to finals,” Lin said.

Breaking into new ground, the AAA will celebrate the integration of cultures seen in breakdance by serving as one of Ground Up Crew’s sponsors in the breakdancing group’s annual battle, Break IC, April 26 in the Hill Center to wrap up Focus Asia Month.

Kody Crawford, co-president of Ground Up Crew, a breakdancing and hip-hop culture club, said this is the first year the AAA is sponsoring the event. He said he was inspired to contact the group because his travels abroad helped him discover how hip-hop is a cross-cultural experience, which resonates with the theme of celebrating multiple cultures.

“Hip-hop can be used as a tool to bring different cultures together,” Crawford said.

In the “Focus on Identity” event April 1, six students who identify as Asian or Asian American sat on the panel and discussed questions of race relations and their experiences growing up as members of a minority group in America.

Freshman Taehoon Kim, a member of the panel, said he struggles with racist overtones in his interactions with professors.

“It’s tricky because you should respect your professor, but at the same time you can’t let that slide,” he said. “There’s going to be another Asian kid in that class maybe two years later and he’s going to feel the same way. We have to look out for the future generations and speak up.”

Sue-je Gage, AAA adviser and assistant professor of anthropology, addressed the room near the end of the event and said she was impressed by the professionalism of the attendees and panelists and their respect for one another.

“The fact that you all were listening to each other is really incredible to me because that’s how change happens,” Gage said.

Lin said the African, Latino, Asian and Native American community is an important part of campus life because it provides safe spaces for people to come together, learn and meet others.

“Considering the fact that there are not a lot of ALANA students here at IC, we tend to stick together,” Lin said.

Lin said she valued the sense of community between the ALANA students and various ALANA-heavy organizations such as the African Students Association, African-Latino Society, Brothers 4 Brothers, PODER: Latino Student Association and others. Lin said that joining the AAA helped her find her space within the community to foster her personal growth during a time when she considered transferring out of the college her freshman year.

“The community here is strong, and we’re always open with each other,” she said. “That’s important because, especially when you are first adjusting to IC, you might need communities like these where you can be yourself and be comfortable.”

Students further emphasized the need for safe spaces to discuss their experiences, especially with microaggressions and other negative instances. Kim spoke of a sense of comfort he felt in sharing his background with other people.

“I find strength in shared experiences,” Kim said. “That’s why I love living in the HOME program. I can go to a safe zone and vent, and I won’t feel like I’m dealing with these things by myself because other people can relate to what I’m going through.”