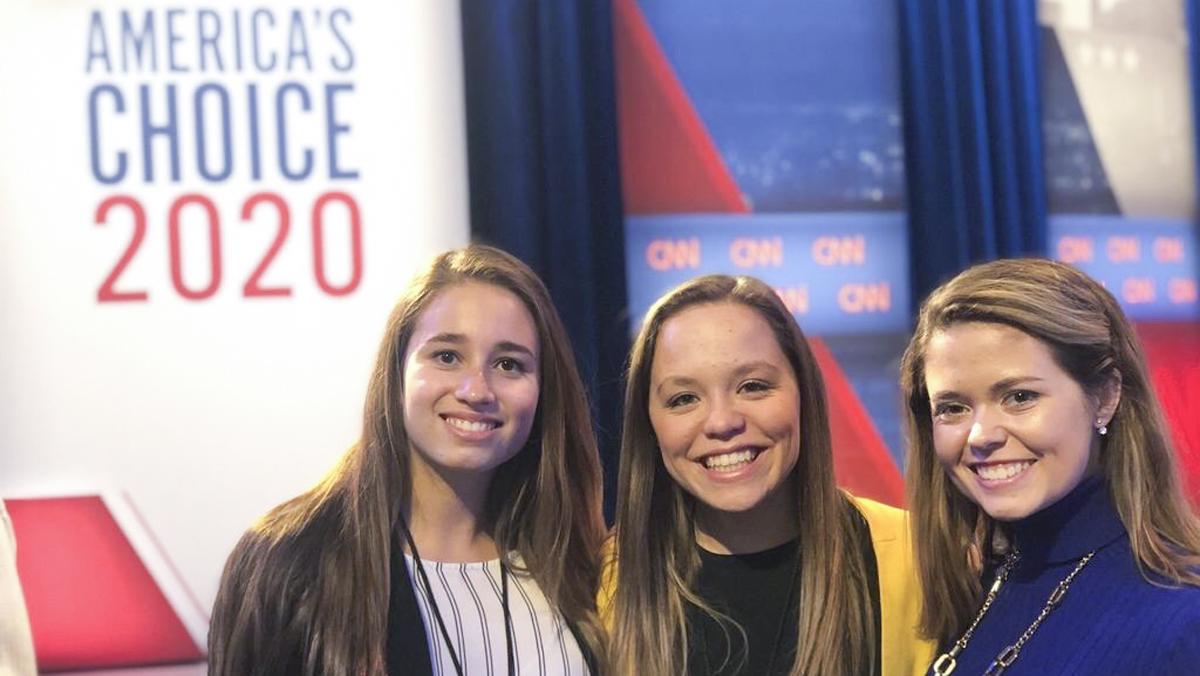 With primaries underway for the 2020 election, Ithaca College students are hitting the campaign trail to cover the election through internship opportunities.

Three students covered the Iowa caucuses through CNN. Seniors Sarah Horbacewicz and Giulia Villanueva-Lopez and sophomore Tara Lynch worked as runners for journalists, stand-ins for broadcasters and tallied support for every candidate among caucus attendees.

James Rada, associate professor and chair of the Department of Journalism, selected the three students to collaborate with students from Drake University in Des Moines, Iowa, to cover the Iowa caucuses Feb. 3.

Three students, including seniors Kristen Mirand and Sierra Guardiola, traveled to New Hampshire on Feb. 11 to cover its primaries, and five students will travel to Memphis, Tennessee, for the Super Tuesday primaries March 3.

The students flew to Iowa together a few days before the caucuses to help CNN prepare, Villanueva-Lopez said. Villanueva-Lopez is an international student from Paraguay, where her aunt is also a CNN correspondent.

“We got to Iowa, and I’m not American, so, for me, I was thinking, ‘Where even am I? Where am I going?’” Villanueva-Lopez said. “None of us had ever been to Iowa before. So we really just jumped right in.”

The evening of the caucus was a hectic experience, but working with other students and industry professionals was a beneficial learning experience, Horbacewicz said Feb. 12,

“I was running to get the next interviewee, and someone else is counting, and then someone else was helping the reporter,” Horbacewicz said. “We could just look at each other across the room and communicate, ‘Now you go there. I’ll go here!’”

The 2020 Iowa caucuses faced many roadblocks. The caucuses attempted to use an app for the first time to keep track of votes, but the app was not thoroughly tested before attempting statewide use. The app failed because of coding issues, according to reporting from the New York Times. Troy Price, Iowa Democratic Party chairman, announced he was stepping down after the reporting of the results was delayed, a move that resulted in criticism.

Caucuses consist of state citizens going to precincts across the state to show their support for their chosen presidential candidate. To do so, attendees separate into groups in different sections of the room based on which candidate they support. Then they are counted to deem which candidate has the most support.

“Obviously, there were major delays in getting any results,” Lynch said. “It was interesting to see how CNN handled that and adjusted to adversity.”

Lynch said another challenge they had was that attendees did not know they could realign themselves after their initial candidate was declared no longer viable. At the end of the first round, only three candidates were viable: Elizabeth Warren, Pete Buttigieg and Amy Klobuchar, she said. Candidate Joe Biden was just two short of being viable, Lynch said.

Lynch said that interning at the caucus provided valuable experience for her career aspiration of being a broadcast journalist.

“Since I was 12 years old, I’ve dreamt of being a broadcast journalist,” Lynch said. “Having an opportunity to experience politics on a national level in such a controversial election is something that can’t be replaced.”

Villanueva-Lopez said that although she loves broadcast journalism, she does not want to be in front of the camera in her career. However, assisting with the production of a televised program was still beneficial for her career aspiration to be a journalist.

“With radio, I can broadcast without the cameras,” Villanueva-Lopez said. “You can always take something. Even if you’re not the same form of media, you can get something out of it.”

Lynch said she was thankful for the experience because it is such a rare immersive opportunity.

“Being there was really informative,” Lynch said. “You truly see democracy at work.”