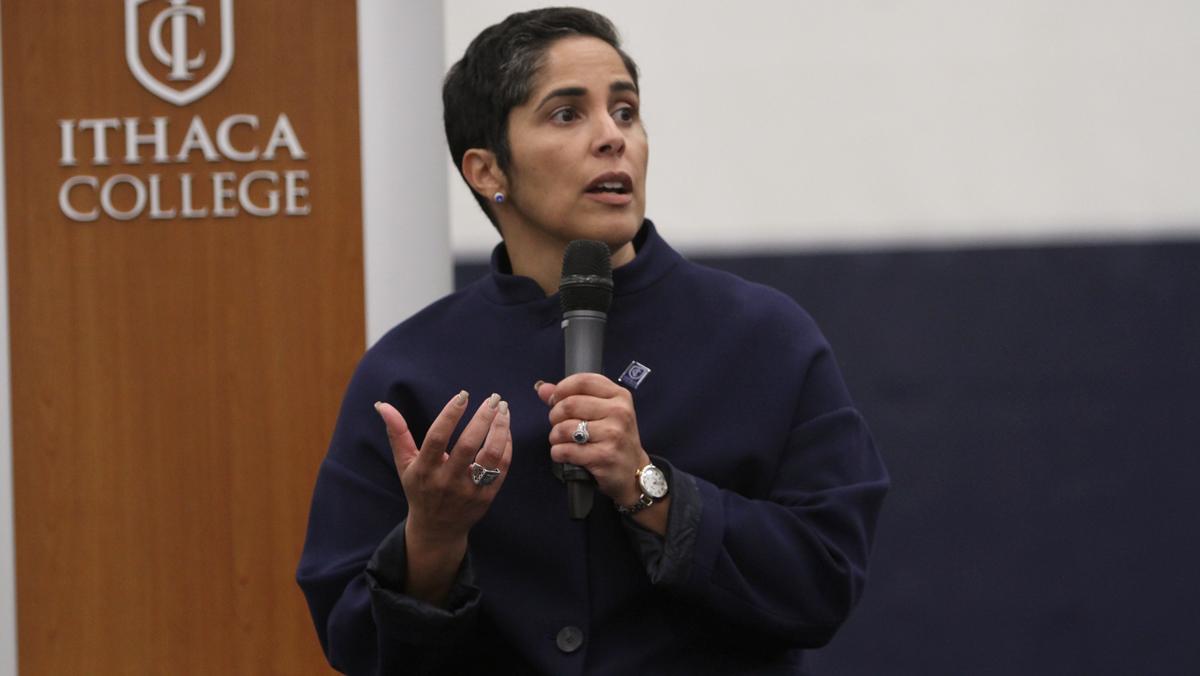 Maxine Hansford/The Ithacan
President Shirley M. Collado hosted the All-Student Gathering in the Athletics and Events Center, with the goal of building a connection between herself and the students on campus.
By Bridget Bright — Contributing Writer
Published: September 10, 2017

Ithaca College students interacted with and listened to President Shirley M. Collado at the All–Student Gathering on Sept. 7.

Approximately 100 to 150 students came to meet Collado at the event held in the A&E Center. The event was co–hosted by Collado’s transition team and the Student Governance Council with the goal of building a connection between Collado and the students on campus.

The gathering had a casual tone, as Collado chose to sit on the front of the stage when addressing the audience, rather than stand at the lectern that was set up for her use. At the beginning of the event, the students were separated into small groups so they could talk personally with each other, similar to the discussion time put aside during the All–College Gathering. Collado also joined in, talking with a group of students.

After the small–group discussions, Collado discussed her personal life, current national events and her adjustment to the presidency. Collado mentioned the divisions between political parties and Betsy DeVos’ announcement to review Title IX policies. She advised students to stay open–minded during their experience at the college. She related the difficulty of her leadership role by pointing out that students, too, have to deal with leadership roles in their extracurriculars.

“People miss the humanity behind what it takes to be a real leader, and the mistakes that you make and the chances that you take,” she said.

The event ended with a question-and-answer portion where students asked Collado what facts would be surprising to know about her and what advice she had for freshmen. Collado opened the floor for students to give advice to the freshmen and said that hearing the students give advice to their peers was her favorite part of the event.

Sophomore Maria Moreno said she came to the event in hopes of meeting Collado and hearing more about her views on national current events, such as President Donald Trump’s announcement to end the Deferred Action for Childhood Arrivals program.

“I’m really excited about her efforts to … give people the mentality that we’re here to make a difference,” Moreno said. “We’re here not to just, you know, pass by. We have to be here and think about the future of Ithaca and our legacy we’re going to be leaving.”

Sophomore Itati Abadie said Collado’s message of encouraging students to be involved on campus and step out of their comfort zones resonated with her. Abadie said she wants to see more student involvement in multicultural events on campus.

“I just want her … to try to bring a little more diversity on campus, since I know she’s a woman of color, and I feel like she represents me, and I want to see more of that,” she said.

Senior Kaitlyn Gough said she came to the event because she was off campus during the Spring 2016 semester and wanted to understand the campus climate before she graduates.

“I was watching a lot of the transition happen from afar, and I felt … homesick for IC, which was an interesting feeling,” Gough said. “And I want to come back and dive right in and get to know where we are going to be going for my last year.”

Bridget Bright can be reached at bbright@ithaca.edu or via Twitter: @bridget_bright ‏