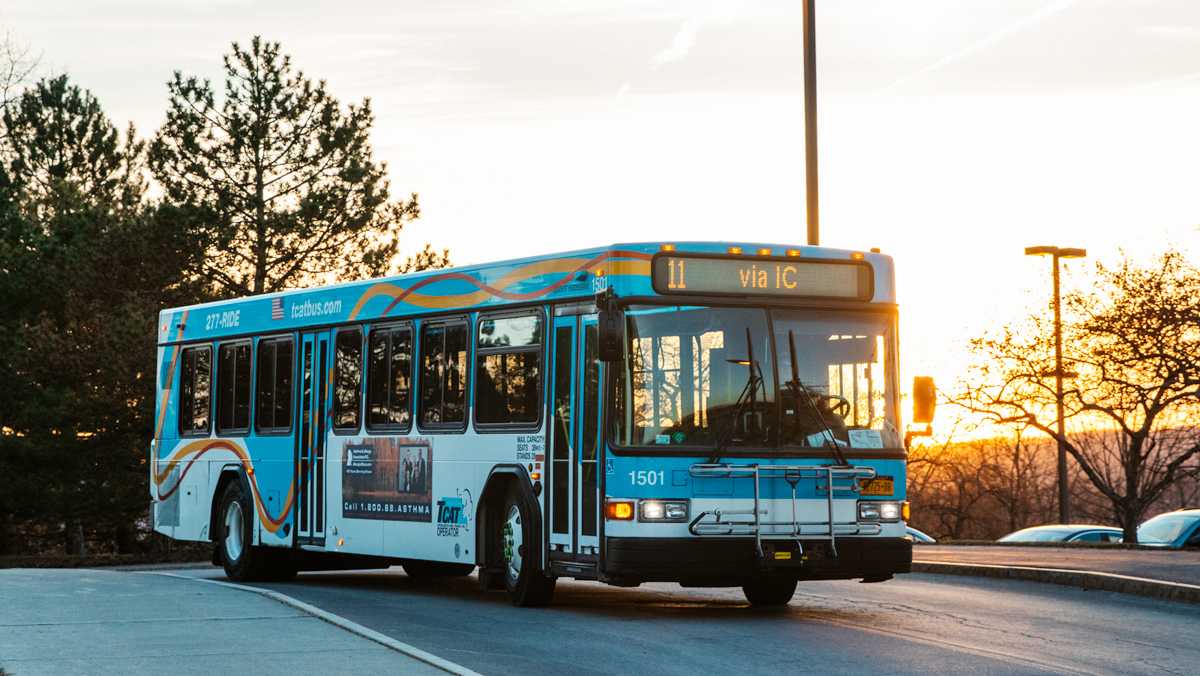 Kristen Harrison/The Ithacan
These routes extend the original Route 11 service area, which is primarily for Ithaca College students and services the campus and The Commons.
By Alex Hartzog — Staff Writer
Published: September 4, 2019

The Tompkins Consolidated Area Transit Incorporated (TCAT) has added two new supplemental routes — the 11S and the 11N — to the South Hill area.

The 11S runs on weekends from the Ithaca College campus to The Commons and the southwest shopping outlets, including Wegmans and Walmart. The 11N goes to Collegetown at night hourly Monday through Wednesday and every 30 minutes Thursday through Sunday. These routes extend the original Route 11 service area, which is primarily for Ithaca College students and services the campus and The Commons. The additional lines came into effect Aug. 25.

The 11S will completely replace the 11 on the weekends, and the 11N will replace the night loop schedule for Route 11, said Matthew Yarrow, assistant general manager for service development and planning.

TCAT made these changes in response to the decline in ridership along Route 11. Ridership for Route 11 declined by approximately 60,000 riders between 2015 and 2018, and it is expected to fall another 20,000 in 2019, Yarrow said. He attributed this decline to the arrival of Uber and Lyft to the area and competitive rates from local taxi companies.

Currently, TCAT is running Routes 11S and 11N until the second half of the fall service period in October when the company will reevaluate the use of the routes and change accordingly, Yarrow said.

The 11N is currently acting as a proxy between the typical Route 11 and Route 90 that partially combines the lower half of Route 90 with Route 11. Route 90 travels between Cornell University’s campus and Collegetown. This is in response to the closure of College Avenue, Yarrow said.

Along with the new routes, TCAT has removed the old fare system of zones, which separated the county into lower and higher-paying areas. Instead, the Zone 1 fares — $1.50 — will apply throughout TCAT’s entire service area, according to the TCAT website.

The decision to create Route 11S was made after a meeting held by the Student Governance Council last year.

“On the 11S, that’s a direct result of what we heard from the [Student Governance Council],” Yarrow said. “We were actually really impressed by the students there. I mean, it was almost completely unanimous, the decision. They wanted direct service to shopping, and they didn’t care as much if the total number of trips was reduced as long as they could get that direct service. Because it was such a clear response, we thought that was actionable.”

Members of the SGC were excited to see the new routes and were hopeful for the opportunities that the new routes would add for students. Senior SGC President Farwa Shakeel said she is excited for the future of TCAT on campus.

“I think the new weekend service to important spots like Wegmans will be crucially beneficial to first-year students as well as students who do not have cars,” Shakeel said. “Even though it’s only weekend service, it is certainly a good start.”

Yarrow said that if ridership increases as a result of the new routes, the company will continue to run the lines. However, if ridership continues to decline, the routes may be terminated or service to South Hill and the campus may be cut further, Yarrow said.

“We’ve gotten creative with the 11 because we’ve seen this fairly continuous decline in ridership, and we’re really trying to turn that around,” Yarrow said. “If ridership continues to decrease on the 11 and it’s too variant, it’s harder for us to maintain the level of service that we put onto South Hill.”

Junior Miriam Goldstein was unaware of the changes, even as she was waiting at the TCAT stop in front of Roy H. Park Hall. Seeing as these schedule changes could affect students from the college, Goldstein said that the college should inform students of the changes.

Goldstein was also excited by the prospect of having new routes that go from campus to other areas of town, rather than just The Commons, without having to make a transfer to other buses like Route 15 and 90 as students had to do previously.