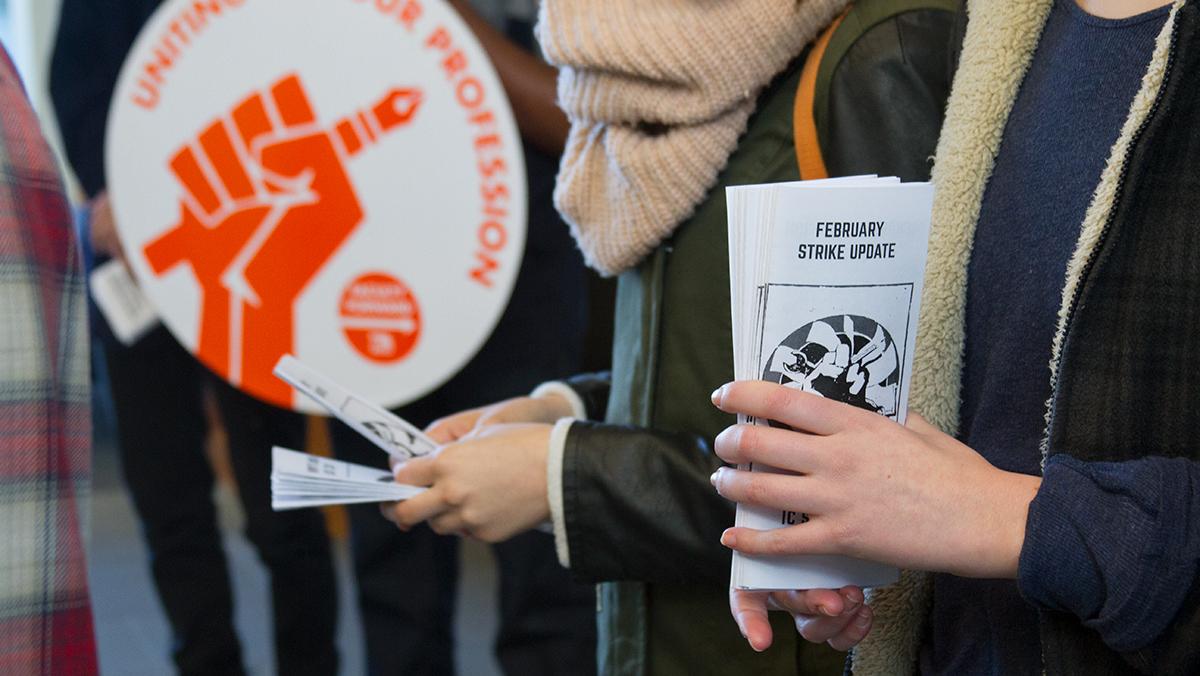 Fernando Ferraz/The Ithacan
Ithaca College published a list of questions the community might have about the current faculty negotiations, which are headed toward a strike. The Ithacan has annotated them below to provide context and clarification to these issues.
By The Ithacan
Published: February 21, 2017

On Feb. 19, the Ithaca College Office of Human Resources published a list of facts and questions that community members might have about a potential contingent faculty strike. The Ithacan has added annotations, written in italics, to the document below, printed in full, to provide context and clarification to some of the information provided by the college.

Ithaca College is in contract negotiations with two bargaining units represented by the Service Employees International Union (SEIU)—one for part-time, per-course faculty and the other for full-time contingent faculty who have year-to-year contracts. Negotiation sessions with a federal mediator are scheduled for February 21 and 24 and the college intends to propose additional bargaining dates, if needed, to continue negotiations after February 24.

The college also employs approximately 460 full-time faculty members who are in neither bargaining unit and who are not unionized.

While the college believes there has been significant progress to date, the union has announced that members of both bargaining units recently voted to authorize their leaders to call a strike at some point if they are not satisfied with the status of contract talks.

Because of the possibility of a labor action, the college wants to make sure that members of the campus community have information about negotiations and the potential impact of a strike.

The following set of FAQs will be updated on a regular basis. If a strike were to occur, messages will be sent directly to students, faculty, staff, parents, and others with more specific information.

What is the status of the current union negotiations?

Since October 2015, the college and the union representing part-time, per-course faculty have been in negotiations over that bargaining unit’s first contract. The parties have reached tentative agreement on 23 out of 26 articles covered by the talks, and are now focused on resolving three open issues: 1. wages; 2. an article proposed by the union to provide payment to bargaining unit members for performing union business; and 3. a recognition clause, describing the membership of the bargaining unit.

Negotiations are also taking place with a separate bargaining unit representing full-time contingent faculty, who are also members of the SEIU. These negotiations have not yet been conducted in depth or resulted in any tentative agreements. One reason for this is that the main focus of the negotiations between the college and the union to date has been on the part-time faculty. For example, the union made its first proposal on longer-term appointments for the full-time faculty unit in December and the college responded in January, so discussions on that important issue are in the very early stages. The union has indicated that it may make additional proposals (i.e., new proposals that the parties have not discussed to date). The college is also waiting for the union to respond to some proposals that the college made in January.

When would a strike take place?

The union has announced that both units have authorized a strike. This means that the union could in theory initiate strike activity at any time.

However, bargaining sessions with a federal mediator are scheduled with both units on February 21 and 24. The college expects that union negotiators will attend both sessions, that progress will be made with  both units, and that additional sessions could be scheduled if final agreements are not yet achieved at the close of the two sessions.

How long would a strike last?

Who would be on strike?

Of course, not every faculty member in those groups might elect to actually strike, even if a strike were called, so some bargaining unit members might continue teaching. It is also possible that some other college faculty, who are not in either bargaining unit, might elect to join a strike as sympathy strikers.

Patricia Rodriguez, associate professor in the Department of Politics and Latin American studies coordinator, said that as a tenured faculty member, she would join a strike if one should occur but that she has not heard if other tenured faculty members would do the same, The Ithacan previously reported.

In the event of a strike, what impact could there be on classes?

For classes taught by faculty who choose not to participate in a strike, there should be no impact on students.

For classes taught by faculty who choose to participate in the strike, the college will provide information to students about changes and modifications.

If a faculty member does miss classes due to striking, the college will seek to arrange for another faculty member to conduct the class(es) in light of the absence; schedule make-up class(es); or provide other suitable academic activities for students.

It’s important to note the college expects to deliver the full educational experience to its students. Some courses may be reassigned and some may run in whole or in part online for a period, and some classes and assignments may need to be made up after a strike.

Will the college remain open during a strike?

Yes. Ithaca College will remain open and operate on a normal schedule. This includes dining services, security, athletics, events, extracurricular activities, administrative functions, and other classes. Should any schedules need to be adjusted, the college will swiftly communicate those changes to students, faculty, and staff. It is our goal to continue delivering the full educational experience for our students during this time.

Can students participate in a strike?

Classes will be held as scheduled and students are expected to attend class as dictated by individual faculty members and their course schedule. Students are free to express their opinions and take actions that they deem appropriate. However, the college will adhere to attendance policies as articulated in the course syllabus.