Union returns to bargaining with receival of counterproposal 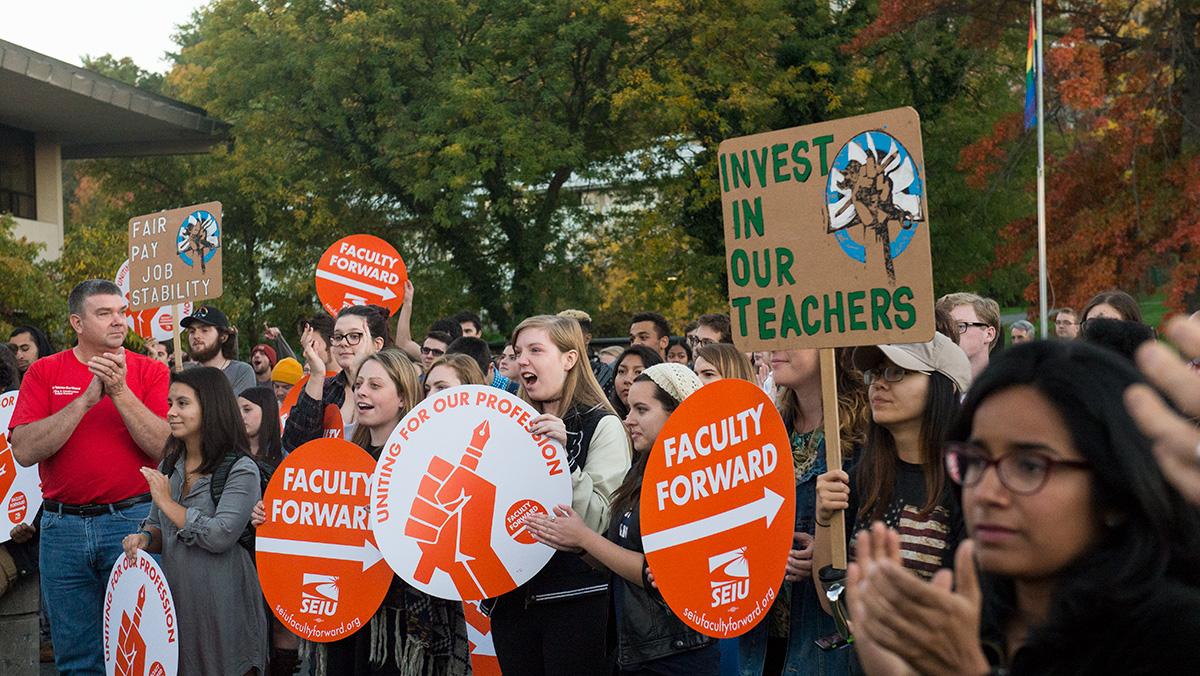 Samantha Fuller/The Ithacan
In light of a protest held on Oct. 19 to rally community support behind the contingent faculty, the part time–faculty union and the full time contingent–faculty union have gone back to the negotiating table with the administration after an announcement earlier this month that negotiations would cease until they received a counterproposal.
By Grace Elletson — Assistant News Editor
Published: October 26, 2016

The part time–faculty union met with the Ithaca College administration Oct. 24 to continue negotiations — the first time the groups have met since the union announced earlier in the month that it would cease bargaining until it received a counterproposal on job security or compensation from the administration.

And this time, it did. The counterproposal from the administration covered three areas: compensation, benefits, and appointments and assignments. The part-time faculty union and the administration have been negotiating a contract since October 2015 and have tentatively settled 16 proposals. IC Students for Labor Action held a rally on Oct. 19 to garner campus support for both the part-time faculty union and the full-time contingent faculty.

The full time contingent–faculty union, which formed May 24, also held its first bargaining session with the administration Oct. 24 in conjunction with the part time–faculty union. At the meeting, the full time contingent–faculty union tentatively settled many agreements in the proposals it presented to the administration, said Nancy Pringle, senior vice president for the Division of Human and Legal Resources and general counsel, in an email.

Brody Burroughs, a lecturer in the Department of Art and a member of the part time–faculty bargaining committee, said those tentative agreements covered proposals that outlined a diversity statement for full-time contingent faculty and the creation of a contract committee to discuss future contract changes and define a hiring process.

Burroughs said the compensation proposal had not changed since the last draft offering part-time faculty a 2 percent raise per credit, which caused the union to walk out of the last negotiation session. However, Burroughs said it is now the union’s turn to present another counterproposal to the administration, which it intends to do at the next session.

The benefits counterproposal reaffirmed the college’s position that part-time faculty are not eligible to receive benefits because they work part time. Sarah Grunberg, an instructor in the Department of Sociology, said part-time faculty currently receive a bus pass, free parking and full access to the library. But she said their proposal is asking for some kind of retirement plan and health care assistance, The Ithacan reported Aug. 21. Burroughs said this is something the union plans to address again in a counterproposal in future meetings.

The appointments and assignments proposal is promising, Burroughs said. He said the administration agreed to establish a “kill-fee” for courses that might get dropped only a few days before the start of the class due to extraneous circumstances such as the class’s not having enough students or a full-time faculty member’s being available to teach it. He said this is important to part-time faculty members because if they prepare for a class that gets canceled, they will be paid $1,300.

“The right direction is hard to say, but I think we’re moving again,” Burroughs said.

Pringle said the college is pleased it made progress in this most recent bargaining session and that it intends to continue these advances.

“We are optimistic our next bargaining session will continue to allow us to make progress on the remaining proposals under consideration with the part-time faculty,” Pringle said.