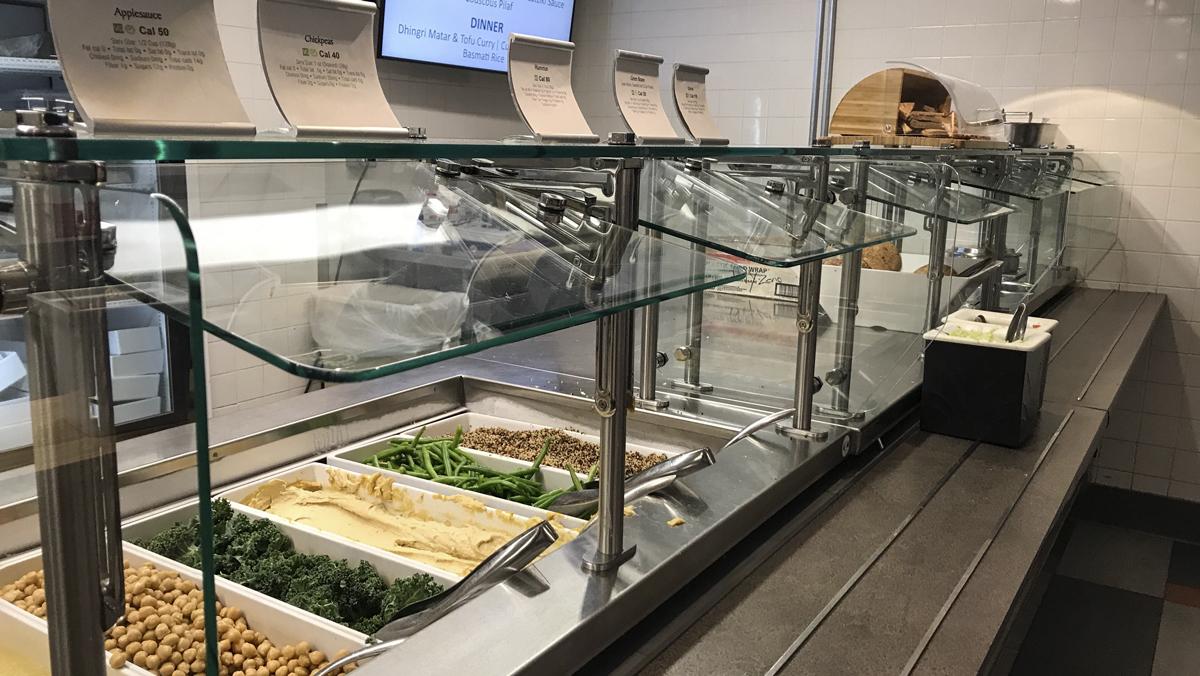 Kristen Harrison/The Ithacan
The vegan station in Campus Center. The vegan program at Ithaca College has received high ratings over the past several years, but vegans on campus have expressed skepticism.
By Krissy Waite — Assistant News Editor
Published: February 20, 2019

Sophomore Kara Schultz was excited to transfer to Ithaca College because, based on her own research, she found that the vegan options in the dining halls were high quality and had a variety of options. Schultz follows a vegan regimen because of dietary complications, and because of the college’s A-plus vegan rating, she thought it could accommodate her dietary needs.

However, after arriving at the college, Schultz said she lost approximately 10 to 15 pounds in her first semester at the college because she could not find enough to eat in the dining halls.

“I would go to Campus Center [Dining Hall] and they would have lettuce and hummus and cold quinoa, and I would eat that and that would be my meal,” Schultz said. “It’s not enough; it’s not sustaining.”

Ithaca College Dining Services, fueled by food provider Sodexo, has received high ratings for its vegan options over the past several years. However, the A-plus grade the college has obtained through a program called peta2 has been greeted by mixed feelings of dissatisfaction and skepticism from students who say that the rating does not accurately reflect the vegan options offered. The peta2 grade is only meant to represent the availability of vegan food on campus, not its nutritional value. Students at the college have expressed that they think vegan food should be graded by its variety and nutritional value as well, which many have said is lacking.

After losing weight, Schultz said she did not go to the Hammond Health Center because she felt that nothing would be done to address the lack of nutrition in vegan food in the dining halls. She did end up joining a food advocacy group, which is not yet officially recognized by the college, to try to address the issues she experienced.

“Honestly, they have a lot of tofu, and it seems like that’s one of the only proteins that they provide, which kind of bothers me because I’ve always gotten my proteins from beans and actual plants rather than something that’s processed like that,” she said. “I guess I just expected more — more whole foods instead of processed.”

Peta2 awarded the A-plus rating to the college in November 2018 and is run by the nonprofit organization People for the Ethical Treatment of Animals, also known as PETA. PETA specializes in animal-rights causes, as well as promoting plant-based, animal product–free diets, like veganism. Veganism is defined by PETA as a diet void of any animal-sourced products like meat, fish, eggs, honey and bovine dairy products.

Each year, peta2 sends out a questionnaire to colleges across the United States asking about the vegan options offered in campus dining halls. To get a grade, the college must self-report on a list of qualifications to be rated by PETA, a process that Dining Services has completed since first participating in the rating system five years ago, according to peta2.com.

The list of 10 qualifications includes whether the college offers at least one vegan entree at each meal, offers non-dairy milk, labels vegan entrees, labels vegan desserts, includes a vegan member on its student advisory board, promotes vegan options, participates in meatless Mondays, offers an all-vegan station and has an egg or mayo replacement. This means that the college must have at least one dedicated station serving vegan food somewhere on campus but not necessarily a vegan station in every dining hall. The only requirement that the college does not fulfill is having an all-vegan dining facility, according to peta2. These requirements are per campus, not per dining hall. This means if a college has three dining halls on campus and only one dining facility fulfills any or all of the peta2 requirements, then the college is still accurately self-reporting. 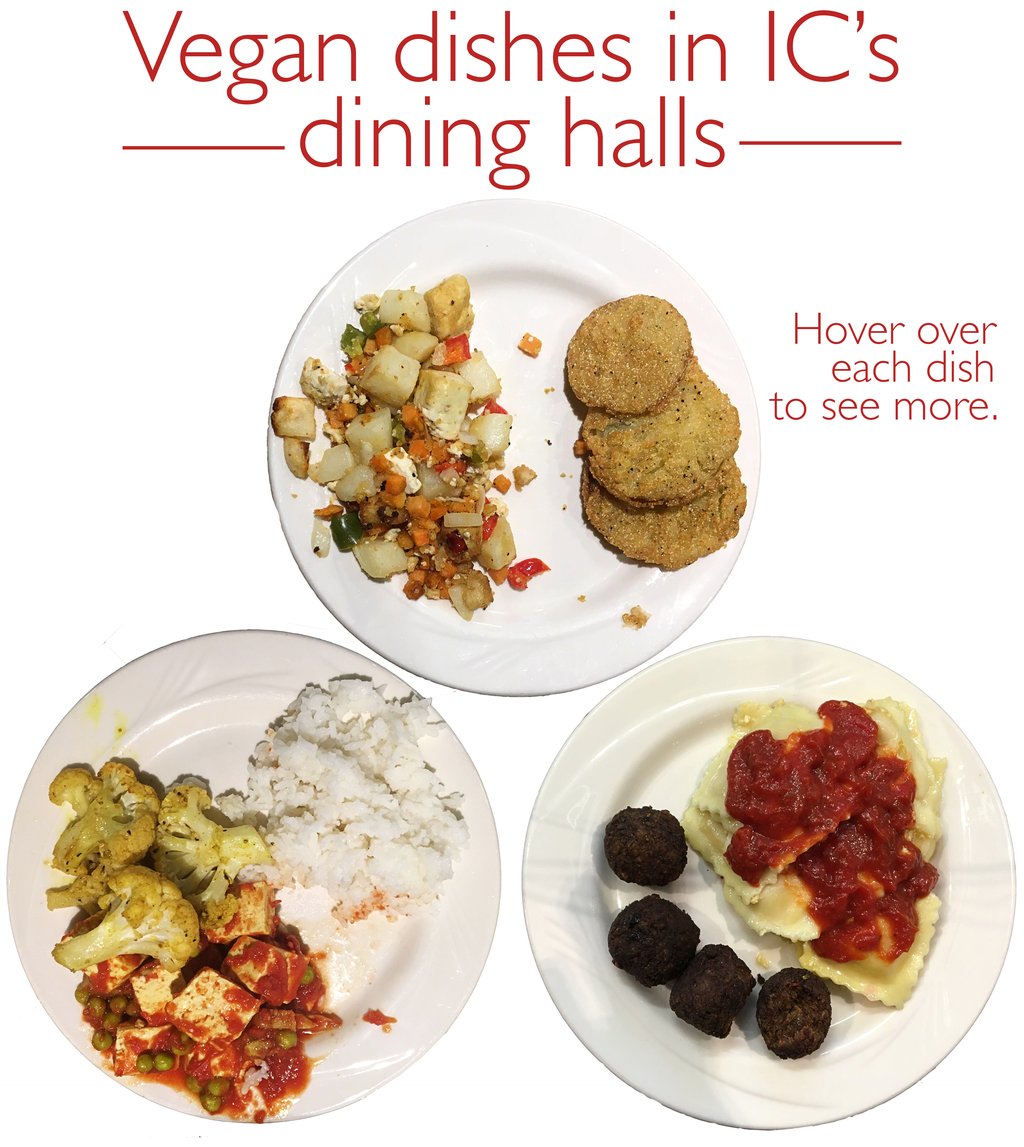 According to Kenneth Montville, education outreach manager for peta2, peta2 started six years ago as a baseline for schools to rate themselves. He said the requirements listed in the questionnaire are only a baseline and are not meant to serve as a final grade.

The peta2 website also allows for student input, either by leaving a comment or by voting on the college’s vegan food quality by using the thumbs up or thumbs down button. However, no student identification is required to access the page, so anyone is able to go on the website and vote. As of right now, the college has a 73 percent student satisfaction rate, but there is no way to tell exactly how many people voted on the website and if they were Ithaca College students who have directly experienced the vegan offerings.

Jeffrey Scott, director of Dining Services at the college, said this is the third year the college has received an A-plus rating. Before then, the college held an A rating for five two years. Scott said that Dining Services has been working with various companies, like the Humane Society of the United States, to develop more vegan options. Despite only having ratings for approximately the past five years, Scott said the college has had a vegan station inside the Campus Center Dining Hall, one of the three dining halls on campus, for 18 years.

Scott said that while he is happy with the rating, there are still improvements that can be made with the help of student input.

“What we have to continue to do is not only have the item, but like anything else, is it the right menu, are they totally satisfied or not, what could make it better?” Scott said. “We have to keep working with students to get input.”

Scott said he does recognize where some of the student frustration is coming from because there is not a lot of variety of food in the dining halls for those who follow a strictly vegan diet.

“The other reality, too, is that certainly if somebody is keeping a strict vegan diet, there’s a lot of the menu choices that are not available to them,” Scott said, “I would expect students to grade us tougher if they don’t have access to the full menu.”

Sophomore Gemma Gallucci has been a vegan for approximately 2 1/2 years and chose to change her diet because of how industrial agriculture treats animals. Gallucci is on the college meal plan and said she has had issues with the vegan station mislabeling its food as being vegan when it is not in the Campus Center Dining Hall, which makes her skeptical about the A-plus rating. She said she does not think the rating is accurate.

Gallucci also said she does not believe that having only one dedicated vegan station out of all three dining halls on campus is enough to qualify for the status of an A-plus rating.

“I think that compared to other colleges, yeah, that makes sense that we have a higher rating, but I don’t agree with an A-plus because I’ve been to Towers [Dining Hall] once, and it was a terrible food experience. … There’s nothing vegan,” she said. “The fact that we have one vegan station in one of our dining halls does not mean we should have an A-plus rating. I think that’s absurd.”

Gallucci said she wishes Dining Services would hire more people who are educated about vegan diets and train student employees how to handle vegan food.

Scott said all senior cooks, supervisors and managers take a safe food-handling course and obtain certifications. Employees also take an AllerTrain course that educates them about cross-contamination and other food hazards.

Sophomore Brontë Cook found another issue with the vegan food on campus. She said she feels restricted eating on campus as a vegetarian. Because Cook prefers not to eat dairy products, she finds herself relying heavily on vegan dishes served in the dining halls. She said she often finds that the options at the vegan station are lacking in protein or are bland options, like pasta, that she could get at another station.

“I am usually really unhappy with the options,” Cook said. “I hate when they have pasta at the vegan station, like you have that on the other side. … I don’t get enough protein at all.”

Cook said something she has enjoyed at the vegan station is the grain bowls that are offered. She said she still wishes more options, like the grain bowls, included more protein.

“I wish they were a little more creative with the protein they do serve … instead of just having tofu sitting there,” she said.

Cathy Saloff-Coste is a registered dietitian who works with the Health Center. She said that vegan diets should include legumes like chickpeas or lentils, whole grains, nuts and seeds, plant proteins like tofu and tempeh, and more fortified foods, meaning foods that have added nutrients. She said vitamin B12 is one of the harder nutrients for vegans to consume because it is found in animal products. She said that vegans can take a B12 supplement or find food products that have added the vitamin. She said that as long as vegans get the needed nutrients and vitamins, following a vegan diet can be very nutritious and filled with options.

“It can be really varied and wonderful,” she said, “The key is to have a variety of foods throughout the day in order to be sure to get all the vitamins, minerals and protein.”

On Feb. 15, the vegan station served fresh green beans for dinner, which only contain 1.8 grams of protein per cup, but have a high amount of potassium and vitamin C.

On some days, like Feb. 11, Feb. 13 and Feb. 15, not all the elements offered at the vegan station were labeled as vegan and stated that they contained either fish or dairy. For example, the vegan station served rice noodles Feb. 13 but the pho broth and tofu pho that were offered with it were not vegan and contained fish, according to Sodexomyway.com.

“Compared to my last school, there’s always been a bunch of vegan options, especially at CC,” Brunner said. “Terraces is a little more hit or miss for me, but it’s definitely nice that there’s somewhere on campus that I can go and eat something there.”

Junior Abby Haley began following a vegan diet her freshman year but did not realize how hard it would be to follow the diet at all of the dining halls. Haley said that adding a vegan station in the Terraces or Towers dining halls would improve the dining experience. She said that when she did eat at Terraces, she often found herself defaulted to the salad bar, which she felt fed the stigma that vegans only eat lettuce.

Scott said Dining Services is always trying to expand the options for vegan dining at the vegan station in the Campus Center Dining Hall, as well as looking for student feedback about what is working and what is not in terms of vegan entrees. He said there are a few different aspects that are thought about when determining what vegan options are offered, as well as where they are offered. How much a food option is consumed, for example, could determine how often it is offered.

“We’re trying to keep improving the service level to all students,” he said. “That’s just symptomatic in college dining. … If you look at what was offered three years ago, it’s a lot further now. If you look ahead three years, it’s going to be a lot more variety.”

Ithaca College has been boosting its vegetarian options by devoting Monday to an international Meatless Monday campaign.