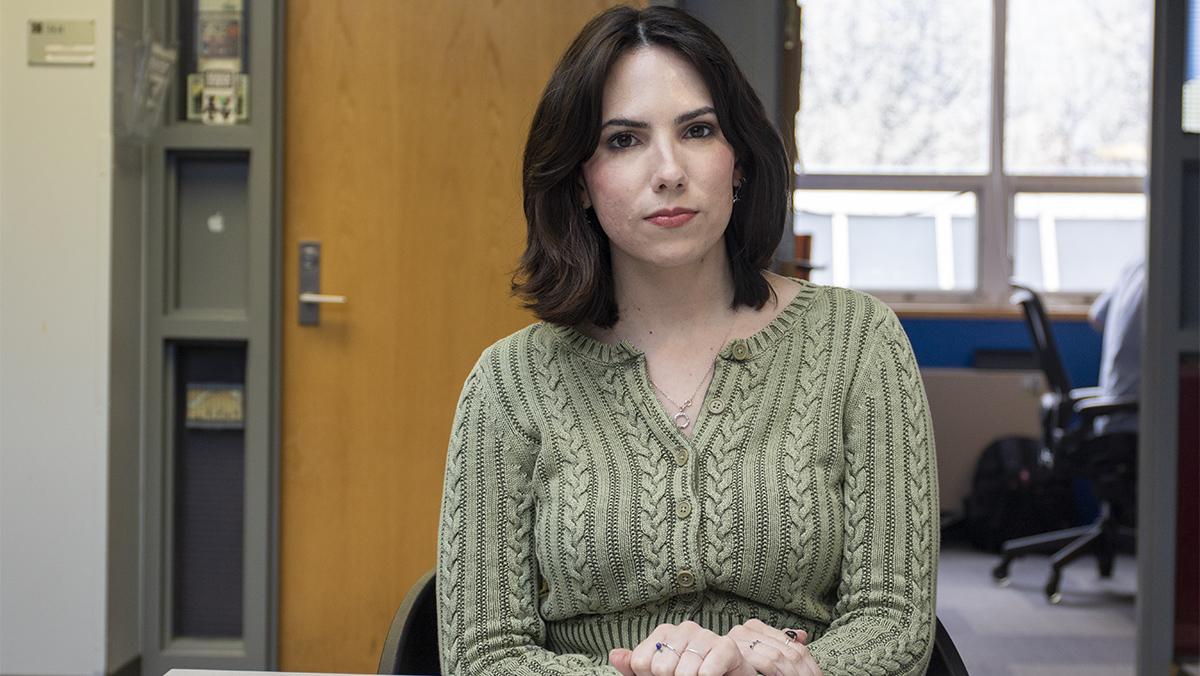 Abby Brady/The Ithacan
Senior Alexis Manore, editor in chief for The Ithacan, discusses the impacts of Ithaca College's failure to hold abusers accountable. This pattern invalidates survivors and normalizes violence within the campus community.
By Alexis Manore
Published: May 8, 2022

This year, The Ithacan has focused its reporting on accountability. Throughout the semester, the staff and editors have dedicated hours upon hours to reporting, writing and editing stories about the abuses that go unchecked at Ithaca College and its lack of support for marginalized voices.

The Ithacan has written about Luvelle Brown, a member of the Ithaca College Board of Trustees who has committed abuses of power; Student Financial Services, which has been lacking in its communication with — and support for — students; the Sports Media program, which has neglected to support the few women in the program; the Student Governance Council, which has failed to properly represent its students; the college, which seems to have lost its focus on environmental activism; and the structures that allow for students to get away with committing acts of sexual violence.

While some of the groups that The Ithacan reported on have worked to make changes and to improve for the students’ sake, the majority have continued to allow for the injustices that The Ithacan documented to continue. While I understand that change, especially systemic change, cannot be made in a day, it seems as if no effort to improve or reform has been made at all — especially regarding Brown’s position on the board of trustees and the issues that students voiced with the Title IX office.

As a survivor of both sexual harassment and sexual assault, it has been extremely disheartening to see how the college has supported and enabled abusers and offered minimal support to survivors.

The fact that Brown, the superintendent of the Ithaca City School District and member of the board of trustees, has been allowed to retain his position of power despite credible allegations that he abused his child and misused his power as superintendent, serves as an example to students that members of the college community can get away with committing abuses without consequence. This lack of accountability is dangerous — it is normalizing violence and abuse.

How are survivors like myself supposed to feel safe on a campus that clearly does not hold abusers accountable? This knowledge is the reason why many survivors — including myself — never report their experiences with assault to the college. I applaud the courage of those who do report to Title IX, but I have heard more instances of investigations finding the accused innocent than the accuser winning their case. This leaves survivors powerless and even more traumatized than they already were.

The Title IX Office has its own limitations; there is only so much its staff can do to support students. However, the onus does not solely fall on Title IX. It falls on the Conduct Review Board to fairly evaluate cases, it falls on the Center for Counseling and Psychological Services and the Hammond Health Center to provide prompt and effective support to survivors, it is on the college to make its campus a place where abusers are held accountable and where survivors are believed.

This type of change starts from the top down. One way that Ithaca College can prove that it does not support abusers is by not reelecting Brown to the board of trustees. Brown’s first term on the board ends May 31, and he could be reelected for up to two additional three-year terms as per the board of trustees’ bylaws. The college cannot allow for this to happen. If Brown is reelected, it will be clear that those in power at the college do not care about their students, especially some of the most vulnerable students.

The college needs to be a safe place for all of its students — no one should have to experience abuse on campus. It is an unfortunate reality that sexual violence will continue to occur at the college and in the rest of the world, but the best that the college can do is to provide effective support for its students and make it clear that it does not tolerate abusers.

Editorial: Students must weigh the limitations of Title IX policies