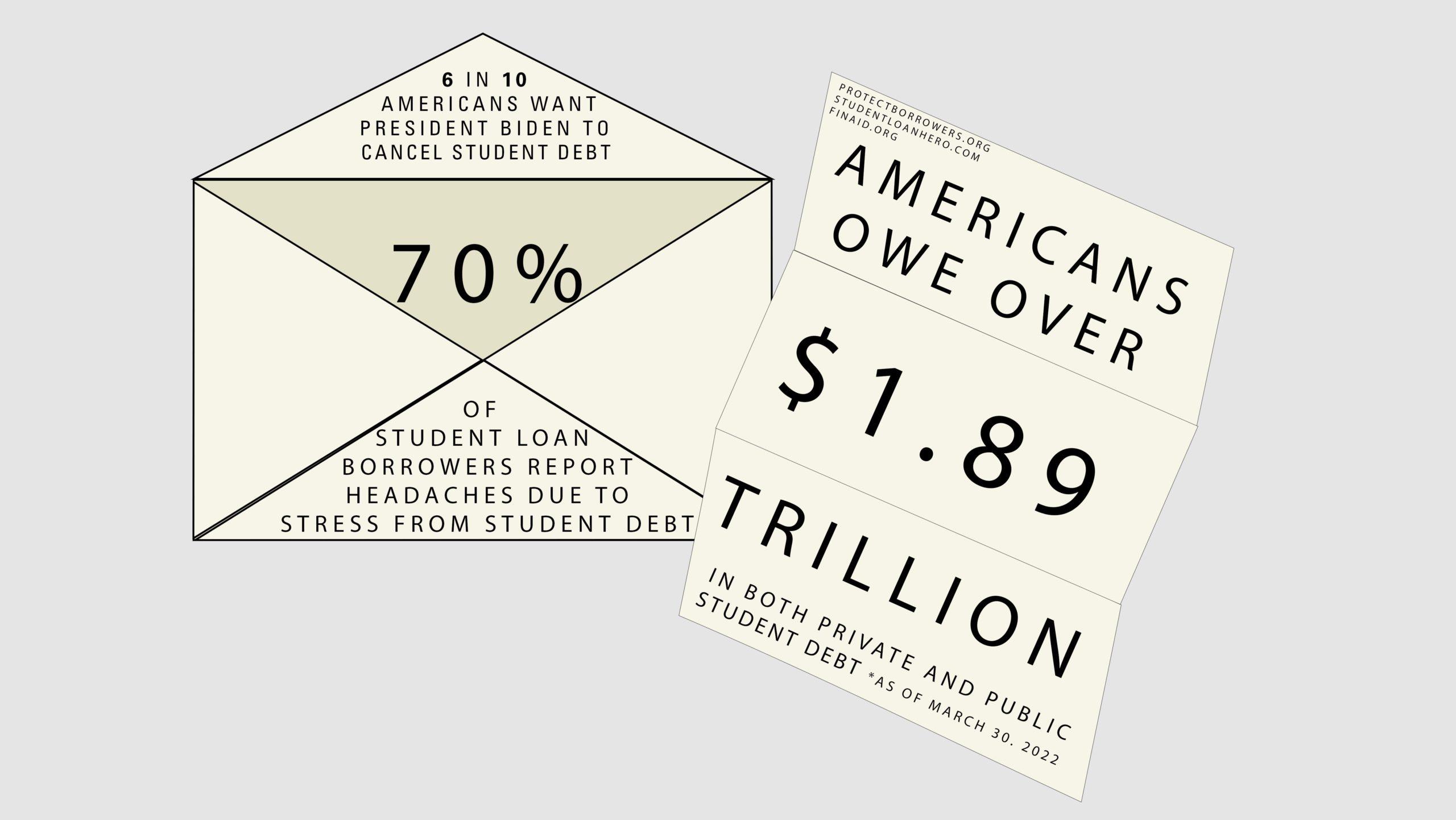 Malik Clement/The Ithacan
While burdensome loans are endemic in the American student loan system and bury the college’s students in debt, financial literacy is an important method for navigating the system.
By Elijah de Castro — News Editor
Published: March 30, 2022

Despite having left Ithaca College at the end of the Fall 2021 semester because of her financial situation, former sophomore Gianny Guzman owes the college over $40,000. Guzman cannot afford to pay it in cash and cannot get a loan approved to cover it, putting Guzman in a stalemate with monthly late fees. Guzman joins other students in stressful financial situations criticizing the college’s Office of Student Financial Services (SFS).

However, Shana Gore, executive director of Student Financial Services, said SFS is planning on making reforms and expanding its capacity so that it can better help students work through their financial problems.

When Guzman was at the college, she was a first-generation student. Since her parents do not speak English, Guzman was in the dark and had to make all of her financial decisions by herself. Since Guzman is no longer a student, she will have to begin paying back her federal loans when the federal pause on student loan repayments resumes May 1. However, Guzman’s inability to get loans to cover her fall semester led to her racking up monthly $200 late fees after multiple deadlines came and went. One of her biggest issues was mixed messaging that she believes SFS gives.

“Everything I learned about financial aid I learned on my own,” Guzman said. “That was really annoying because depending on who you speak to at Student Financial Services, they give you a different answer.”

Like Guzman, senior Jade Greer said one of her biggest issues with SFS has been poor communication. Greer said that shortly before her freshman year, she was told by SFS that she would not be able to come to college until an issue with her family’s taxes was resolved. Tax returns are an important part of the SFS process. While the situation was eventually sorted out, Greer said the situation caused her significant stress.

“This was like two weeks before school and I had a major panic attack,” Greer said. “I just freaked out. … It was just a really lengthy process and I was emailing like four different people from Student Financial Services. They were all telling me different things on what to do. … They could have told me that in May or June, not August.”

Gore said via email that SFS is seeking improvements in communication and has taken multiple steps to streamline its process. These steps include more transparent and personalized financial aid packages and utilization of electronic forms. Gore also said SFS will also eliminate the College Scholarship Service Profile, which would save families certain fees.

Gore sent The Ithacan the results of multiple surveys that are emailed to students after SFS appointments. The results indicate generally positive approval of SFS services and Gore said she follows up with any students who submit negative answers. However, 49 students responded to the survey.

“We are committed to the continuous improvement of SFS services,” Gore said. “All SFS team members participate in weekly training to stay up to date on federal, state, and institutional regulations and policies. We also look for opportunities to obtain feedback from students … I follow up with any student who indicates a negative or neutral response, to better understand their situation and learn how we could have better met the student’s needs.

SFS helps students take out both federal and private loans. Many private student loans need to be cosigned, meaning that the student needs someone — typically a parent or guardian — to jointly sign the loan in case of failure to repay. Since Guzman’s parents do not have U.S. citizenship, they cannot cosign Guzman’s loans, which made it more difficult for Guzman to pay for college. Guzman’s father does not have credit and her mother does not have a Social Security number. Since Guzman is only 20, her credit score is low. Eventually, Guzman found a way to take out private loans, which are riskier and often harder to repay.

“I was always constantly calling (SFS) about what I should do, how to fill out things and I was getting different answers from everybody,” Guzman said. “It just became a routine of doing the same thing, the same back–and–forth every semester.”

In the loan industry, it is extremely difficult for borrowers with low credit scores to get higher-quality loans. Additionally, private lending companies — like those recommended to students on the college’s SFS website — engage in predatory lending and risky underwriting that is often toward borrowers with lower credit scores.

Gore said the college is working on a partnership with ElmSelect, an online service that allows for a neutral comparison of private student loans. Gore said it is difficult to create a list of all the best loan options for the students, as loan quality can vary depending on the needs of the student.

“It’s tough for us to put a list out there and say ‘These are the best lenders for Ithaca College students’ because of so many individual circumstances,” Gore said. “In the next month or two, you’ll be able to put Ithaca College in when you go on ElmSelect. … It’s going to offer some filtering and sorting tools based on what the student and their family may be looking for.”

Freshman Zac Sultzer said with managing his scholarships and financial statement, SFS has been timely and helpful in handling his questions.

“They are effective,” Sultzer said. “They’ve always been able to fix things. I remember one time I got a scholarship and it was supposed to go up [on my financial statement], so I had to go and say, ‘Hey, I have this scholarship,’ and they quickly fixed that. I think they always answer within a reasonable amount of time.”

Freshman Noah Rosenzweig said that before he arrived at the college, his EFC was too high for him to pay and as a result, SFS was not able to help him get his tuition paid for.

“The bulk of my experiences [with SFS] were before I came to Ithaca,” Rosenzweig said. “I was trying to talk to them about financial aid and financial need. … Long story short is I couldn’t get the financial aid that I needed. … Student Financial Services said, ‘Sorry, we can’t give you the help that you’re asking for. It’s because of your taxes.’ … And so I kept talking to them but essentially getting the same response.”

While fixing EFCs and helping a family with their taxes is out of the control of SFS, Rosenzweig said he believes SFS can improve by looking at who is behind tuition payments. Rosenzweig believes this would allow the college to understand which students are paying out of their own pocket and which are getting help from their family.

“I think that would be a little more helpful,” Rosenzweig said. “Some students … get help from mom and dad or from grandpa and grandma. There’s also students that pay themselves that work every summer, every break and are working themselves down to the bone.”

Editor’s Note: Gianny Guzman was the opinion editor for The Ithacan.