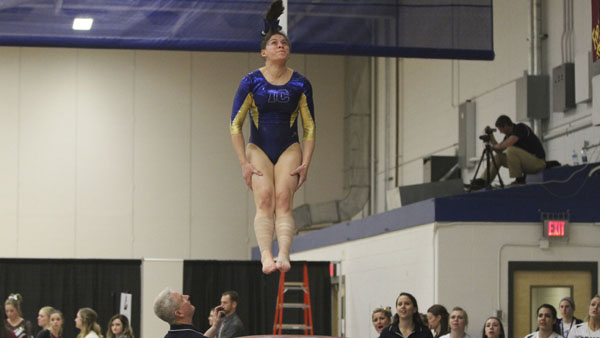 Sabrina Knight/The Ithacan
Freshman all-around gymnast Alexis Mena soars through the air as she competes in the vault event at the National Collegiate Gymnastics Association Championships on March 21 in Ben Light Gymnasium.
By The Ithacan — Ithacan Staff
Published: March 26, 2014

Thirteen members of the men’s and women’s swimming and diving teams competed at the 2014 NCAA Division III swimming and diving championships from March 19–22 in Indianapolis. The Bombers won a combined total of 10 all-America honors in competition, seven for the men and three for the women.

Junior Matt Morrison led the men’s team with two first-team all-America honors in the 1-meter and 3-meter diving events. He scored 433.10 points in the 3-meter dive, which was good for No. 5 overall, and he took No. 7 in the 1-meter dive with 479.65 points.

The men’s squad finished 13–1 in dual meets this season with 13 individual all-Empire 8 conference selections, while the women’s team tallied an 11–0 record this season, including its fifth Empire 8 Championship in six years.

The Blue and Gold dominated in the first quarter, creating an early 6–0 lead. The Bombers only allowed two goals in the first half, and entered halftime leading 9–2.

The Bombers played Elmira College on March 22 and earned a 21–5 win for its fifth straight victory. In the third period, the Bombers scored 13 goals and ran away with the game against the Soaring Eagles.

The Bombers return to action at 1 p.m. March 29 at Cabrini College in Radnor, Pa.

The women’s lacrosse team split its two games March 19 and March 22. The Bombers dropped a 12–7 contest at No. 2–ranked SUNY Cortland, and they won 9–7 against No. 11–ranked St. John Fisher College.

The Bombers faced Empire 8 conference rival St. John Fisher on March 22. Fischer led the team in scoring with three goals. Runyon and Marion each had two scores, while Guzzo and Standera pitched in one goal each. Gilson and Marion each added an assist.

Goaltenders, freshman Emily Ross and senior Brittany Romano, split time in goal. Ross played the first half and recorded four saves, while Romano had one save in the second half.

The Bombers will play Union College at 5 p.m. April 1 in Schenectady, N.Y.

Four different players on the baseball team had multiple hits to lead the Bombers to a 15–0 win against Cazenovia College on March 22 on Cornell University’s Hoy Field.

The South Hill squad led 1–0 in the fifth inning before scoring five runs in both the sixth and seventh innings to bring its lead to 11–0.

Junior John Prendergast started on the mound and picked up his third win of the season, which leads all Bomber pitchers. He pitched seven shutout innings with six strikeouts and only five hits allowed.

The squad is scheduled to play the Houghton College Highlanders at 1 p.m. March 27 in Houghton, N.Y.

The gymnastics team competed and hosted the National Collegiate Gymnastics Championships on March 21 in Ben Light Gymnasium. The Bombers placed No. 7 overall as a team, and posted their highest team score of the season with 182.300 points.

Sophomore Megan Harrington led the Blue and Gold, as she was All-American for her all-around performance. Harrington scored 37.050 points and placed seventh in the competition.

The Bombers also earned their highest scores of the season on the balance beam and the uneven bars at the meet. As a team, its balance beam score was 45.300 points, and the team’s uneven bars score was 44.450 points. Freshman Ingrid Calfee scored 9.225 points, and Harrington scored 9.475 points. Senior Shilanna Gallo and Harrington scored 9.600 points and 9.200 points, respectively.

The men’s tennis team lost a 5–4 contest in its dual meet against Hobart College on March 25 in Geneva, N.Y.

The Blue and Gold struggled against the Statesman in the singles events, losing three of five matches. Davis lost his match in two sets by a score of 6–3, 6–1. Levine lost his first set 6–3 and was unable to bounce back, conceding and also lost in straight sets. Hayes struggled in his match, winning only one game in a 6–0, 6–1 loss. Reid also had trouble scoring, losing in straight sets 6–2, 6–1.

Andersen was victorious, winning both sets 6–4. Passman won his first set 6–4 but lost his second set 6–1. He went on to secure the victory scoring 6–3 in the third set.